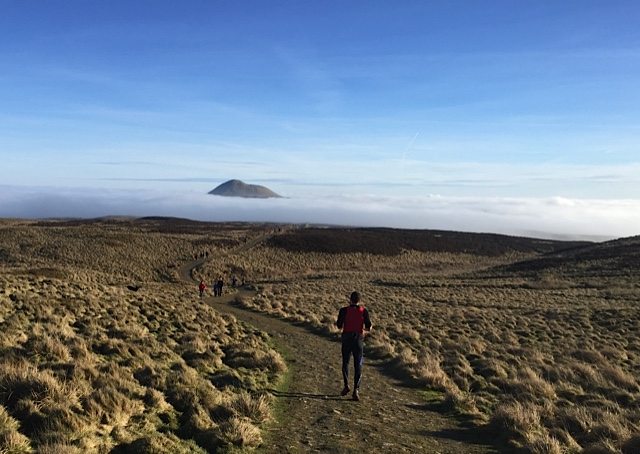 The Devil’s Burdens hill running relay 2017 in Fife was almost as much a challenge of logistics as physical endeavour.

Our over-40s team from Glasgow Triathlon Club comprised (all but one) newcomers to this race. Apart from a few hints and tips from friends who have previously run the race, we turned up at the start at Falkland village with no real idea of what we were doing.

Only Dan, my running partner, had previously run a couple of legs of the race, but not leg 3.

We knew the relay race totalled 31 km with four legs for teams of six. We read this:

We also knew there was an element of navigation required for legs 2 to 4.

The Lomond hills in Fife are beautiful. I can’t recall visiting them before but I plan to go back. The hills have two high points, West Lomond at 522m and East Lomond at 434m, and are situated in Lomond Hills Regional Park.

The weather was strangely stunning. Thick fog covered the valley and lower hills for much of the day, but above about 250m or so the sun shone warmly and most of the runners were treated to a superb temperature inversion.

The Devil’s Burdens race makes great use of the hills and paths for the relay event.

Nick waits at hand-over one. Viv was running leg one and Sharon, Nick’s running partner, had popped to the loo!

The first leg is waymarked and on tracks and trails. First up for the oldies GTC team was Viv. She has told me she doesn’t like to push herself too much when running but I know she’s a good runner and when she came into the first hand-over she was red-faced and sweaty. She said: “I think that being part of a relay made me run faster than I usually do. I wanted to give the team a good start.”

Jim, Sharon, Nick and our friend (in another team) Jo.

Nick and Sharon ran leg 2 for us. Ready for the off as soon as Viv appeared at the top of the last descent into the village of Strathmiglo, the pair soon disappeared and it was left to Jim, our main driver of the day, to scoop up Viv and drive to the next hand-over in Kinnesswood.

I had Fern the Campervan so I also drove to Kinnesswood, where my running partner Dan was already parked. A bit of forward planning saw me place Nick’s kit into Jim’s car so that when he came off the hills he would have warm clothes. I also left my rucksack in Jim’s car hoping that someone would bring me a warm jacket at the end of my run. (Sadly this never happened although it was partly my fault for not giving anyone instructions to do so! As I said, logistics are a big part of this race.)

Dan at the start of leg 3. He points to the hill we were to climb.

I am not sure I would have found the start of leg 3 if Dan had not shown me. He has run the Devil’s Burden a few times before and was fairly sure where we should wait for leg 2 runners to arrive. We stood at the bottom of a hill looking upwards.

The mist came and went and we could sometimes see high up the hill but at other times we could see only 150m or so ahead. This meant we needed to keep our eyes peeled for our Oldies GTC team members.

I was quite nervous. I could now see that our leg start would be back up the steep hill. Very few people were running up the hill and as leg 2 runners arrived, many were slipping over due to the mud and steepness.

Suddenly, Nick and Sharon were running toward us. Nick handed the orienteering style stamp punch card to Dan and we set off. We had to collect various checkpoints (CPs) on each leg to prove we had fully completed the race.

That first ascent was every bit as brutal as I’d imagined. Dan set off at a good pace and I was left to keep up as best I could. My calves burned and my breath got faster harder but we passed lots of people and that was rewarding.

At the rounded shoulder at the top of the ascent we headed off trail for a bit. Many people chose to stick to the path and after a while Dan and I could see this was a better idea. Trying to run over thick grassy tussocks and heather wasn’t easy and so we had slowed to a walk.

While the path was longer, many of the people we had passed on the hill climb were now ahead of us. We reverted to the path and agreed it was the better option. (I have no doubt that if Dan had been running solo he would have stayed off-path and managed to run the heathery sections. I am useless at that kind of running though because I worry I’ll twist my ankles.)

After a little navigation and many ups and downs we reached CP1. CP2 seemed to come quite quickly after that and I started to enjoy our run. We settled into a fairly comfortable cross-country pace and managed to chat a bit. I am sure that the frontrunners were not chatting but we wanted to enjoy the outing.

Then came another big uphill section. Again we passed quite a few other runners and I felt like we might be more than halfway through our leg. We didn’t have a sports watch between us though so it was a bit of a guess.

Above the cloud views in the Devil’s Burdens race 2017.

The views were amazing. We could see the tops of the surrounding hills just above a thick blanket of white clouds and I felt like we were running in a dream world. I even took the time, mid-race, to take a photo because it was so beautiful.

Leg 3 is mostly downhill after the highest point and Dan and I managed quite a good pace. Every so often a couple of running whippets would fly past us and I wondered if we might be close to the finish. However, a look at the map said it was another few kilometres to go.

Dan and I shared my last few jelly babies, which gave us a great wee boost. Suddenly Dan jumped into high-speed action and I struggled to keep up with him. Dan is very good at running downhill and I had to ignore my fears and pain for a bit to fly after him. It was hard work on the quads and I worried I might suddenly collapse because my quads were shaking so much.

The final section of leg 3 is a bit of a bugger. After a lot of steep and fast downhill there is suddenly an uphill. It’s probably not very far but it felt like forever. I still had no idea where the end might be and I simply tried to keep my legs moving. Some people had slowed to a walk.

Then, just round the corner, we could see the group of leg 4 runners waiting. Dan and I raced to the hand-over… but Jim, our leg 4 man, was nowhere to be seen. It turned out the rest of the team had misjudged how long it would take to find and reach the third handover.

It was very frustrating to find Jim wasn’t there but our team wasn’t the only one to have logistical issues.

I also ended up very cold. Having run back down into the fog, I started to shiver. My jacket was still in Jim’s car a couple of miles from the hand-over and so I ended up borrowing bits and pieces of warm clothing from the rest of the team. I was still shivering hours later though.

After finishing, Jim said his leg was harder than he had thought it would be. There was a big ascent and then a descent. While Jim usually enjoys running downhill he said the terrain made it difficult to do so with any kind of speed and fluidity.

But he did finish – and that meant our team had completed the Devil’s Burdens relay.

We all agreed that next time we would pay a lot more attention to the driving logistics. It was very stressful for Jim to arrive late at his hand-over and frustrating for the team to lose a lot of time in transition. As triathletes, we are always acutely aware of wasted transition time.

Post-race we had to arrange to pick up various vehicles left in different Fife villages before heading home. Thank goodness Jim was happy to drive and his heated car seat was a highlight of my day.

Despite the logistical difficulties, including the driving between hand-overs, locating the hand-overs and people ending up very cold after their running sections, the overall race was brilliant. It was great to be part of a team and I enjoyed discovering a new place to run.

We learned a lot from our first hill running relay and I expect we’ll be back next time to have another go. The race is well organised and the soup and coffee/tea were very welcome at the race start/finish in Falkland village hall.

I would recommend that runners give this a go, although my top tip would be to recce the route before racing it. We had tried to do this but illness meant we never did.

We were third mixed over-40s team (out of five!) and 106th out of 147 teams. It was our first go, so I don’t think we disgraced ourselves and we have a good time to aim to beat next year.