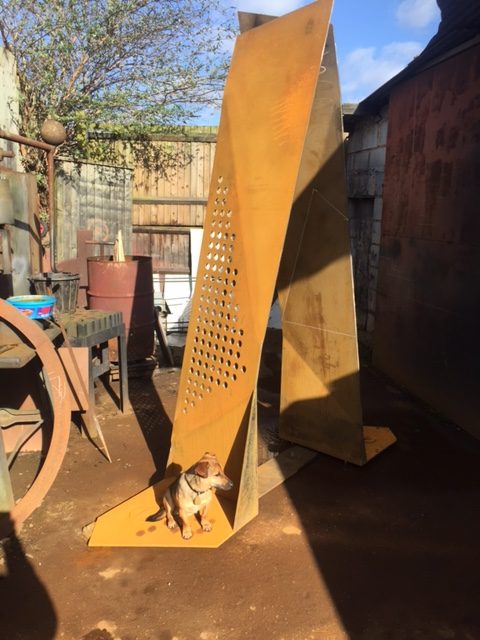 Prototype of a Daymark.

A British coast bike ride launched the idea for a Tour de Coast project. Now some 100 Daymark posts along the British shoreline will offer highlights to views and attractions. Find out how the project started and where it is at. I wrote about it in my recent Sunday Mail column. See the pdf or below.

Dozens of Scottish coastal hotspots are set to be highlighted in a new outdoors project.

The Tour de Coast will include 100 posts around the British coastline, including 42 in Scotland.

The plan is for 29 posts – called Daymarks – to be installed on the Scottish mainland and 13 more on the islands.

There will be 47 Daymarks to visit in England and another 11 in Wales.

The idea for the Tour de Coast came about after two friends cycled the coast of Britain in different directions.

In 1997, Marcial Boo set off from his home in Kent to ride clockwise around the coast.

He cycled the 5000-mile coast in sections until he finally completed it in 2016.

In 2011, Gary Edwards decided to do the same trip but anti-clockwise.

Gary and Marcial crossed paths in 2013 when they both rode through Berwick-upon-Tweed.

At the same time, friends of Marcial and Gary started to ask them about the highlights of the coast and where to visit.

The Tour de Coast was born with the aim of creating a network of 100 of their favourite locations.

Together with another friend Alex Oliver, Marcial and Gary formed the Tour de Coast charity last year to raise funds locally to build and install the network of Daymarks.

Prototype of a Daymark.

Marcial, of Whitstable, Kent, said: “We want to encourage more people to visit different places on Britain’s coast and to discover for themselves these fantastic places.

“The 100 posts highlight a location of particular beauty, history, grandeur or calm on the coastline.

“We hope that they will be visited by walkers, runners, cyclists and anyone who enjoys a beautiful view or a moment of peace.

“Perhaps people will even ‘collect’ the markers, ticking off the numbers from one to 100 across Britain.”

Marcial explains the name for the posts, Daymarks. He said: “Daymarks were used in the 1700s as navigational aids.

“We have modelled the design for our 21 century markers on the original Daymarks.”

A prototype of the Daymarks has been created by blacksmith Andy Quirk, of Utopia Forge in Surrey.

Each post, which will be around two metres tall, will have a plaque with a number and information about the landmark.

Now the project is embarking on the next stage to have the 100 Daymarks rolled out along the coast.

Marcial said: “We are contacting local councils and organisations across Britain to ask if they are agreeable to the posts being installed. We have had positive feedback from many organisations already.

“We are asking, too, for a financial contribution to the build, transportation and installation of the posts – form £5000 to £7000 each – and also offering advice about how people can fund-raise if they want to.”

Among the 42 in Scotland, four Daymarks will be placed on the Outer Hebridean islands.

Number 58 will be located at Tangasdale on Barra; number 59 at Lochmaddy, North Uist; 60 at Scalpay on Harris; and 61 at Ness on the Isle of Lewis.

The North Coast 500 route will feature some 12 Daymarks and Dumfries & Galloway are keen to install their five identified posts.

Marcial said: “We would love to hear from other areas where we would like to install posts – people can check the map on the website – and to work with them to get the Daymarks in place.

“It would be amazing to see all 100 Daymarks installed as soon as is practically possible and to witness people enthusiastically collecting them.

“We are delighted by the response so far and we look forward to the first installation of number 88 at the Middlesbrough Transporter Bridge in Yorkshire in July.”