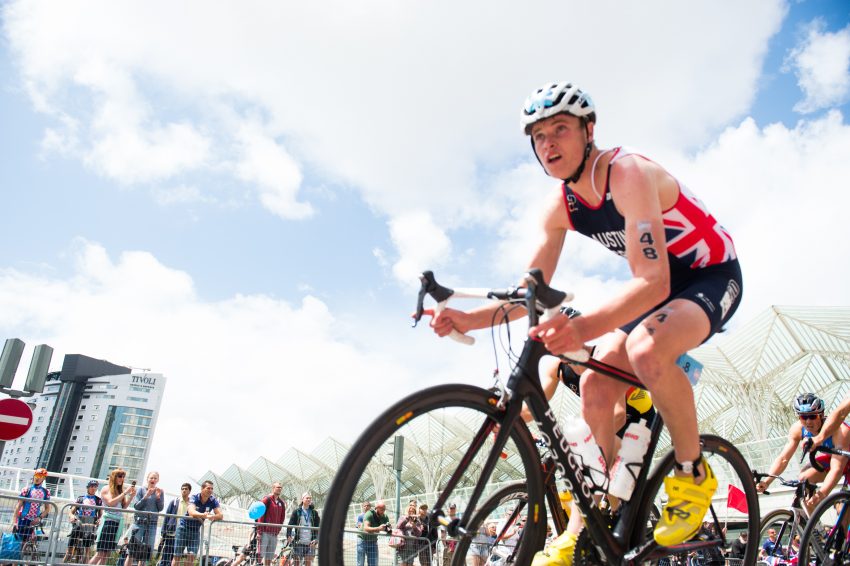 You might well remember Marc Austin. He was the triathlete who rode a superb bike leg with the Brownlee brothers at the Glasgow 2014 Commonwealth Games at Strathclyde Park. Sadly, he could not keep up with the overall winners during the run section of the race but he will be forever remembered for his strong and plucky race bid.

Now Marc is hoping to compete on the same course but this time in the Glasgow 2018 European Championships. And the elite triathlete from Glasgow is also urging amateur triathletes to make a bid for the age group European triathlon champs, which take place at the same time. Find out more about how to enter and read my Sunday Mail story in full. 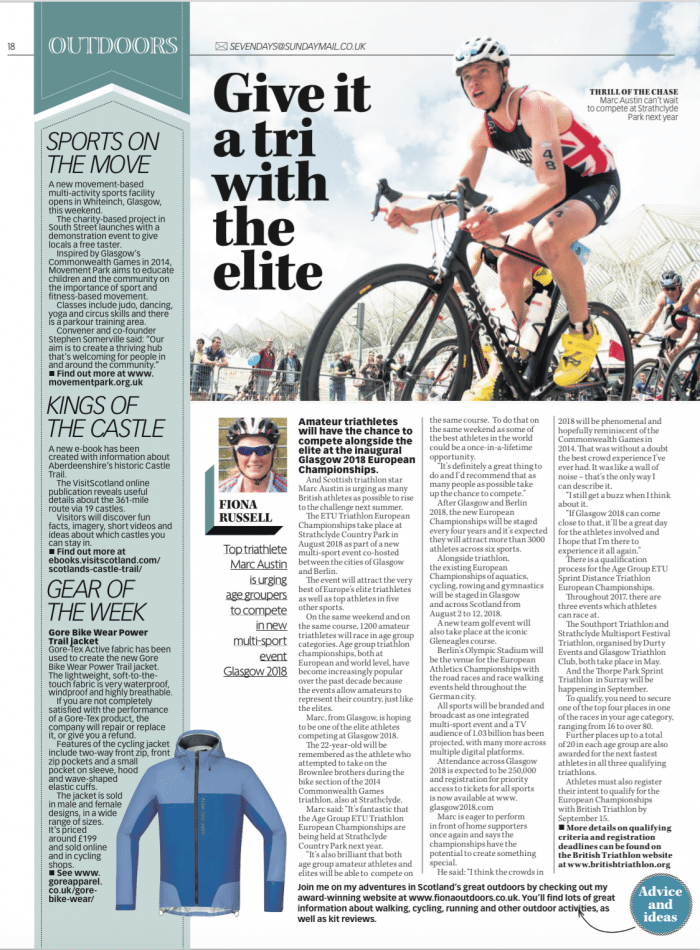 Give it a tri with the elite athletes

Amateur triathletes will have the opportunity to compete alongside the elite athletes at the inaugural Glasgow 2018 European Championships.

And Scottish triathlon star Marc Austin is urging as many British athletes as possible to rise to the challenge next summer.

The ETU Triathlon European Championships take place at Strathclyde Country Park in August 2018 as part of a new multi-sport event co-hosted between the cities of Glasgow and Berlin.

The event will attract the very best of Europe’s elite triathletes as well as top athletes in five other sports.

On the same weekend and on the same course, 1200 amateur triathletes will race in age group categories.

Age group triathlon championships, both at European and world level, have become increasingly popular over the past decade because the events allow amateurs to represent their country, just like the elites.

Marc, of Glasgow, is hoping to be one of the elite athletes competing at Glasgow 2018.

The 22-year-old will be remembered as the athlete who attempted to take on the Brownlee brothers during the bike section of the 2014 Commonwealth Games triathlon, also held at Strathclyde.

“It’s also brilliant that both age group amateur athletes and elites will be able to compete on the same course.

“To do that on the same weekend as some of the best athletes in the world could be a once-in-a-lifetime opportunity.

“It’s definitely a great thing to do and I’d recommend that as many people as possible take up the chance to compete.”

The 2018 European Championships will be staged every four years and it’s expected they will attract more than 3,000 athletes across six different sports.

Alongside triathlon, the existing European Championships of aquatics, cycling, rowing and gymnastics will be staged in Glasgow and across Scotland from August 2 to 12, 2018. A new team golf event will also take place at the iconic Gleneagles course.

Berlin’s Olympic Stadium will be the venue for the European Athletics Championships with the road races and race walking events held throughout the German city.

All sports will be branded and broadcast as one integrated multi-sport event and a TV audience of 1.03 billion has been projected with many more across multiple digital platforms.

Attendance across Glasgow 2018 is expected to be 250,000 with registration for priority access to tickets for all sports now available at www.glasgow2018.com.

Marc is eager to perform in front of home supporters once again and says the championships have the potential to create something special.

He said: “I think the crowds in 2018 will be phenomenal and hopefully reminiscent of the Commonwealth Games in 2014.

“That was without a doubt the best crowd experience I’ve ever had. It was like a wall of noise – that’s the only way I can describe it.

“I still get a buzz when I think about that.

“If anything can come close to that it’ll be a great day for the athletes involved and I hope that I’m there to experience it all again.”

There is a qualification process for the Age Group ETU Sprint Distance Triathlon European Championships.

Throughout 2017 there are three events, Southport Triathlon and Strathclyde Multisport Festival Triathlon, organised by Durty Events and Glasgow Triathlon Club, both in May, as well as Thorpe Park Sprint Triathlon in September, that athletes can race at.

To qualify you need to secure one of the top four places in one of the races in your age category, ranging from 16 to over 80.

Further places up to a total of 20 in each age group are also awarded for the next fastest athletes in all three qualifying triathlons.

Athletes must also register their intent to qualify for the European Championships with British Triathlon by September 15.

More details on qualifying criteria and registration deadlines can be found on the British Triathlon website at www.britishtriathlon.org