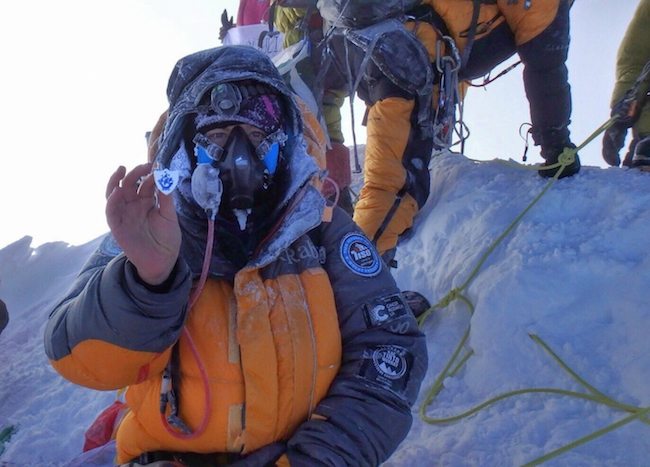 Mollie Hughes with her Blue Peter badge on the summit of Mount Everest.

Edinburgh-based Mollie Hughes, 26, yesterday reached the summit of Mt Everest (8,848m) from the north side. Her feat makes her the youngest Briton, the youngest European woman and the first English woman to scale the world’s highest peak from both the north and south sides.

In temperatures that dropped to -40C, Mollie, originally from Devon, reached the summit at 1.14am GMT (5.34am local time in Nepal) on Tuesday May 16, 2017, with climbing partner Jon Gupta of Mountain Expeditions.

Relaying a brief message shortly after reaching the summit, she said: “I am elated, exhausted and I know I still have the hardest part to do – the long and difficult descent to base camp. 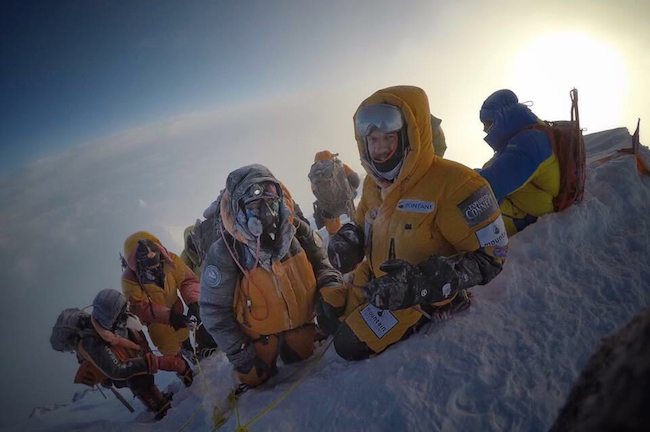 Mollie Hughes and Jon Gupta on the summit of Mount Everest.

“Jon and I have already spent more than four weeks acclimatising on the mountain. Thanks to a weather window, yesterday evening we left Camp 3 (8,300m) and we’ve finally reached the top.

“The climbing has been really, really hard but our mental and physical strength got us up here. I can confirm that the north side is definitely more difficult than the south side.

“A huge thanks to Jon, the sherpas, family, friends and to Tiso as my principle sponsor on this expedition.

“I am really proud to be the youngest Briton to have scaled Everest from both sides. Now, we’ll focus on achieving a safe descent from the top of the world.” 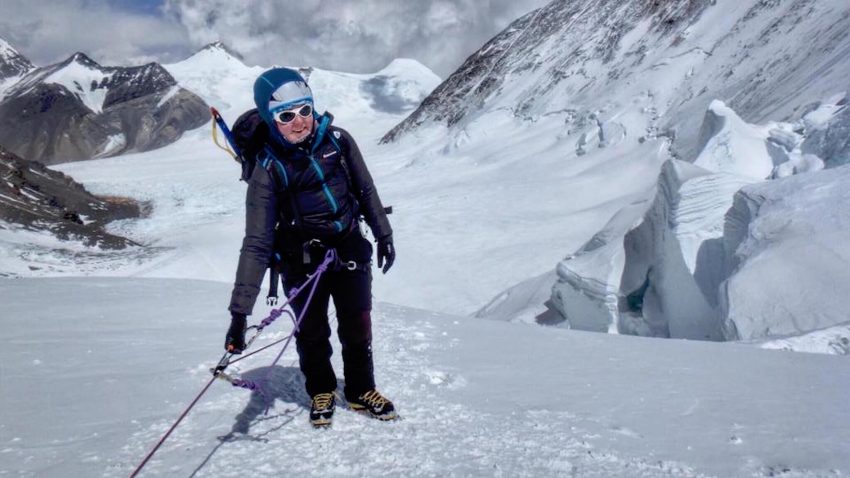 Mollie, who in 2012 summited Mt Everest from its south side at the age of 21, is 28 years younger than Lynne Hannah, from Northern Ireland, who in 2016 and at the age of 54 became the first British woman to achieve ascents from both the north and south. In 1975, Junko Tabei (Japan) became the first female climber to summit the mountain that in 1953 was first officially climbed by Tenzing Norgay and Edmund Hillary.

With a £1 donation for every metre climbed, Mollie hopes to raise more than £8,000 funds for Cancer Research UK.  She is being supported throughout the expedition by Tiso, the outdoor adventure specialist where she is an employee in Edinburgh.

Everest from the north side

While many climbers choose to ascend from the south, the north route from base camp in Tibet, China, is claimed to expose mountaineers to colder and windier conditions. The route includes an arduous and psychologically testing final day ascent over three prominent rocky steps on the northeast ridge. All are negotiated at an altitude of more than 8,500 metres (28,000ft) in the so-called death zone.

Prior to her record-breaking climb, Mollie said: “To climb Mount Everest is an incredible experience and one that is also the ultimate test of your psychological resolve and ability to cope with physical suffering. The spectacular north side of the mountain will push us to the limit. 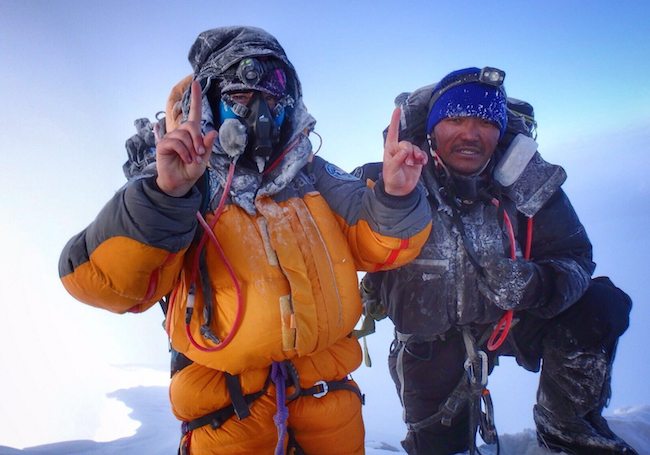 Mollie Hughes on the summit of Mount Everest with her sherpa.

“I love climbing and adventurous activities. Hopefully, my second expedition to Mount Everest will inspire other young women to realise that with careful planning and determination, challenges can be overcome and dreams achieved.”

Chris Tiso, CEO of Tiso Group and who was part of the 2000 Tiso expedition on which Polly Murray became the first Scottish woman to summit Mt Everest, said: “Mollie Hughes is an inspirational young woman. All at Tiso Group are very proud that she has reached the summit after a long and difficult climb and entered her name in the Everest record books. It is a phenomenal achievement.

“Of course, Mollie and Jon (Gupta) now face an equally daunting descent. All involved with the Tiso Return to Mount Everest 2017 Expedition wish them a safe return to base camp and look forward to welcoming Mollie home in early June.”

In addition to support from Tiso Group, Hughes is also receiving help from the philanthropist Kae Tinto Murray, Osprey Backpacks and the engineering firm ch2m.

Mollie started climbing at secondary school and at the age of 17 summited Mount Kenya (Africa’s second highest peak). She was first inspired to climb Mt Everest when as part of her sports psychology degree at UWE Bristol she interviewed seven Everest summiteers and learned of their different psychological experiences on the mountain.

Mollie left the UK for Kathmandu in Nepal in early April before travelling into Tibet. If all goes to plan she hopes to return to the UK in early June. I wrote about her historic bid.