First go at riding in the Sir Chris Hoy Velodrome 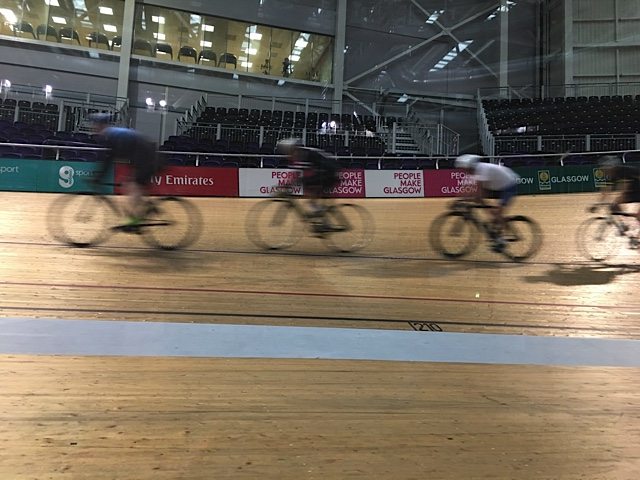 Although I had been keen to try track cycling at Glasgow’s Sir Chris Hoy Velodrome since it opened for the 2014 Commonwealth Games it was only this weekend that I finally gave it a go.

I was invited to join a coached club session with cyclists from Dumfries. I had met them while on a training camp in Mallorca earlier this year.

I was shown the basics of track cycling by Velodrome coach Billy. Here are a few things I learned.

The track looks every bit as steep and scary as I thought it would. I have been a spectator at the velodrome during a professional event and I wondered if the track would seem less or more daunting from inside the velodrome. It is far more daunting.

Riding between the black and red line in the sprint zone.

The bikes are simple in design with a fixed wheel and single speed. The brakes are your legs, rather than normal brake pads and levers.

You wear clip-in pedals (Look/Keo) and get on to the bike by leaning on a wall or the side barrier of the track.

If you stop pedalling you are very likely to fall off because the bike will be jarred into stopping and will throw you off.

The first rule of track cycling is to keep pedalling.

The second rule of track cycling is to keep pedalling.

Riding in the Cote d’Azur area and towards the bend.

Even just the slightest effort of extra pedalling propels you forward like a racing leopard.

Stopping is achieved by planning when to stop. You must plan this a lap or two ahead and you need to slow down first by completing removing the power from your legs.

You can slow down in more of an emergency style by pedalling while also pulling back up on the pedal stroke with your hamstrings.

The flat part of the track is called the apron. The light blue painted area immediately outside this is the Cote d’Azur. After that there are three lines: Black, red and blue.

The zone between black and red lines is sprinter’s lane, which is the optimum route around the track.

A minimum 2.5 metres (or half the track width) above the inside of the track is the blue stayer’s line. which is the outer line.

These lines form a perfect circumference of the track in ever heightening circuits.

A big grin after an exhilarating first go on the track.

The angle of the track (with 180-degree bends) at the corners is 44 degrees (or maybe 45 degrees). It’s the same angle for the entire embankment. It was hard to believe this from the apron area!

Speed is your friend. To stay on the track as you corner then embankment you must be pedalling hard and speeding along. Think of it as similar to a roulette wheel where the ball bearing stays high when it is moving fast but drops down when it starts to slow.

It’s mind over matter as you start to climb up the track. I was convinced I would slide down and off the corners but I pushed myself to forget what I was doing and simply ride hard.

It is exhausting riding at higher levels on the track. Not only is the circuit much longer but you have to push hard to climb the steep side of the corner.

Your speed grows very quickly as you rise up the track.

To slow yourself down you must plan ahead and come to a stop over one or two laps. I tried to slow down too quickly after a couple of circuits on the red line and it didn’t really work to well. I didn’t fall off but I was sufficiently scared into thinking more about it all and planning ahead.

I almost forgot to keep pedalling in a corner at one point but was reminded to focus when I got a wee jolt of braking action.

To progress to being able to ride on the track on my own I must pass four accreditation levels. These are not expensive but you need to book them in advance and complete all four. The cost for the four levels and six hours of teaching/riding is £76.40 (this include bike hire). See new riders.

I found I had a wheezy cough by the end of the session. This is common apparently. It’s thought to be caused by the dry air in the velodrome and also the effort at which you must work to stay on the track. I don’t think my asthma helped matters.

A fellow rider said that her children, who have asthma, add some lemon juice to a bottle of water to stop the dry cough.

Track riding is the perfect combination of fitness, strength, power, fun, excitement, thrills, scariness, adrenaline and rewards. I can’t believe it has taken me so many years to discover it.