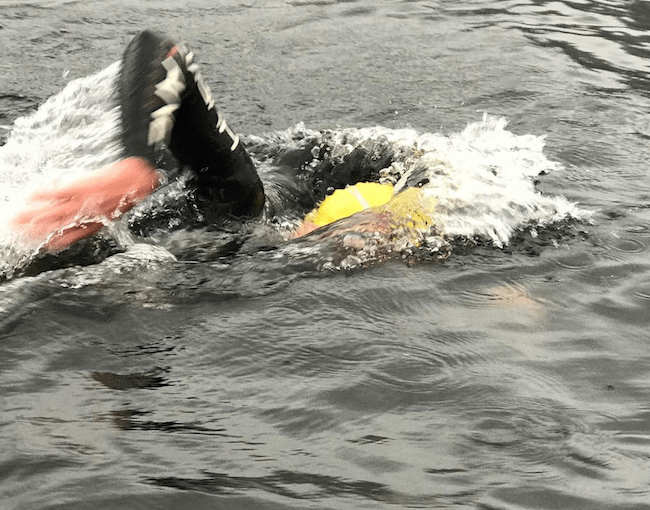 Caroline, of Peebles in the Scottish Borders, took part in her first outdoor swim in Loch Lomond last August. Less than a year later, she has completed an arduous solo swim of the full length of the loch, which is the UK’s largest area of inland water.

Caroline, 44, has always been a keen pool swimmer. She said: “Since I was very young I have loved swimming. I always will.

“Yet my first open water swim was only last year, at the Great Scottish Swim two mile event. I was second lady home and so I thought it was only right that Loch Lomond would be my choice for a long-distance swim.” 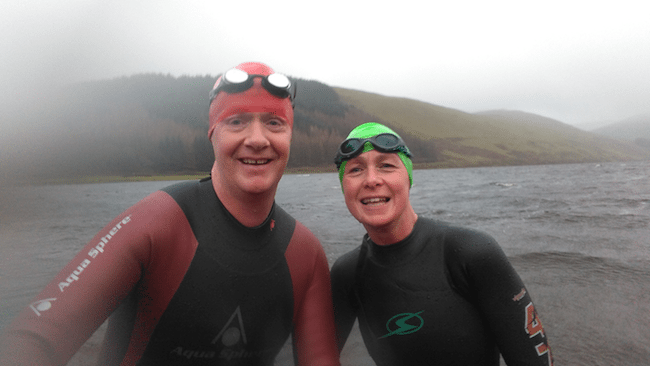 Caroline and her husband Grahame

Caroline, who is a school assistant at Peebles High School, has been training around 75km each week at Peebles Hydro Hotel, as well as an outdoors session with Vigour Events. The training sessions outdoors have built up to include swims of between four to six hours in Bardowie Loch, Loch Lubnaig and Loch Venachar.

Caroline said: “My motivation for this swim was purely my determination to succeed. Knowing that I had so many people encouraging me made me realise that I could do it.”

Caroline was also raising funds for the charity Diabetes UK. She said: “This is very special to me as I was recently awarded a Diabetes Care In Schools Award from Diabetes Scotland for the work I do with pupils at Peebles High School who have type 1 Diabetes.

“I was very proud receiving the award as I was nominated by the pupils/parents and the Diabetes health care professionals at Borders General Hospital. The pupils are just inspirational and it’s a real joy working with them.” 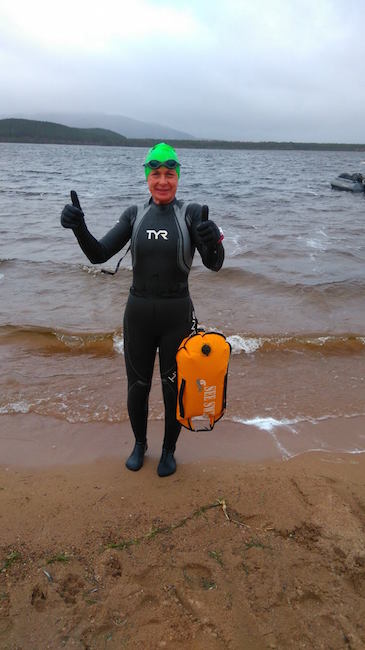 Caroline at the start of the Loch Lomond swim.

The day of the Loch Lomond swim

To swim the length of Loch Lomond, from Ardlui to Balloch, is around 21.6 miles. Caroline hoped to finish in less than 14 hours but really wanted to complete in around 12:15.

She said: “Robert Hamilton (the founder of Vigour Events) said that I would take between 12-14 hours to complete the swim and I just knew that I wanted to do it in less than the 14 hours. I wrote down a time of 12 hours 15 minutes, which to me was realistic, but I didn’t tell anyone until the night I finished.”

On the day, she completed the distance in 12 hours 21 minutes and 35 seconds. Caroline said: “This was amazing considering the awful conditions that I swam in. However, the swim wasn’t about a time, it was about finishing and still being able to function once I got out the water.”

Caroline described the swim as “crazy”. She said: “The weather was not as predicted and the first four hours were really brutal with wind and rain. The last few training sessions were in similar conditions too so I knew I could cope but I was hoping it wouldn’t last for 12 hours.

“I never really got too cold, just a bit chilly at times, but when that happened I kicked harder and pulled harder so it wouldn’t get on top of me.

“I only had one hard 20 minutes when I did start having negative thoughts but I very quickly got myself out of that way of thinking and focused on all the messages of support from my friends and family.

“I can honestly say that I never felt exhausted, just tired, and I think that was because my stroke was consistent the whole way, even through the wind.

“The most exciting part was obviously seeing the ‘finish line’ in the distance but as I know from climbing Munros, you are never at the top until you are actually on the cairn and that was the same as the end of the swim. You think you are nearly there but you aren’t.”

Support was give by Robert on a boat, along with Stuart the pilot. Robert looked after the feeding plan. Caroline explained: “Robert fed me every hour. He threw a box and flask attached to a rope that contained muesli bars, jelly babies, raisins as well as a hot drink. The food towards the end was disgusting as the box let in some water and it was all mushy so I had to drink it!

“I wasn’t allowed to touch the boat or have physical contact with them but it wasn’t personal, just the rules!”

Caroline described the finish line as “unreal”. She said: “So many people from Team Vigour came to support me and my husband, Grahame, waded into the water to help me stand up. It was quite emotional.

“Grahame had spent the whole day travelling up and down the loch in the car trying to catch sight of me and following the tracker. He was a real star.” 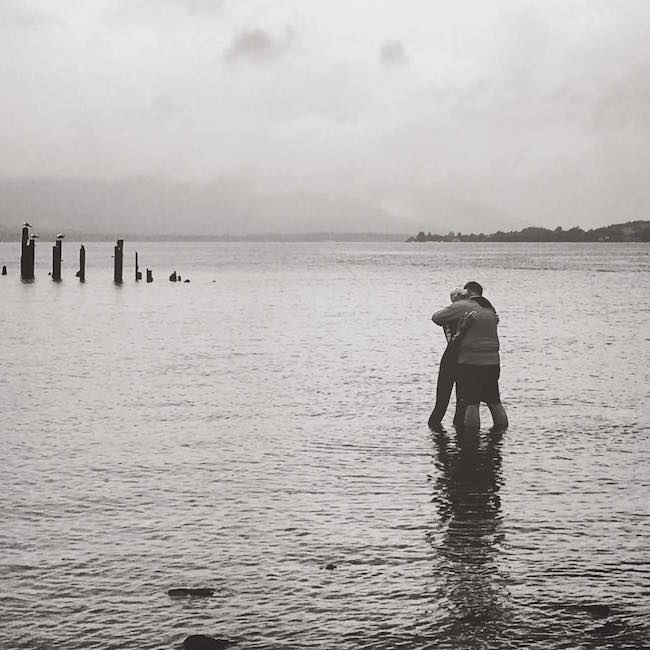 A big hug from Grahame as Caroline finishes the swim.

Grahame had lots of warm clothes ready for his wife after the swim. Caroline said: “I warmed up very quickly afterwards. I don’t think it will sink in for a wee while yet what I have achieved. I feel very proud of myself and who knows what will be next.”

Caroline is also very grateful for the support, including Vigour Events and Grahame. She said: “Grahame has been with me every step of the way and I couldn’t have done this without him. He has given up a year of walking the hills to take me to my swim sessions every weekend, although I have managed to get him into a wetsuit and have a go, too.”