Mark’s determination pays off in Rockman 2017

Mark and Emma coming out of the water. Pic credit: Diego Escobedo

The Rockman is a challenging swim-run event that takes place in Norway. It includes a total of 6km of swimming and 36km of mountain running split into different sections. It has taken Mark Cohen, of Glasgow, four attempts of this tough race to become a finisher. This month his determination finally paid off.

Mark partnered with Emma Kay for this year’s Rockman Swimrun, which took place on July 15. “Perhaps it would be fairer to say, I coerced Emma into doing this with me, rather than calling her a willing partner,” says Mark “I actually signed her up, then phoned her to check she was free that weekend!”

The race profile makes for breath-taking reading. There are 10 swim sections of between 90m and 1700m each. The runs total 12 sections of between 100m and 7km each. This includes a feisty “Stair Climb” of 4,444 steps up the side of a hydroelectric pipe and a “Rocky Drop” of 5.8km. There were 10 pairs of Brits among 80 pairs competing from across Europe.

Mark knew what he would be in for because he has tried three times previously to finish the race. He says: “I’ve failed to finish in previous years for various reasons including a lack of proper nutrition, a partner with hyperthermia, going slightly off piste and losing my goggles.

“This year, however, I was more prepared and despite having lots of niggly injuries I was determined to finish.”

The race starts with competitors jumping from a ferry into the water of the fjord. Mark and Emma were tied together by a bungee cord. Mark says: “This meant I would be towing Emma in the swims and she would towing me in the runs. This was no mean feat by Emma when you consider I’m four stones heavier than her.

“It worked a treat in the swims as I could put my head down and swim as fast as I could without wondering what direction Emma had swam off in.”

The run is rocky, hence the name “Rockman”. It is also hilly. There is a total of some 2500m of elevation to gain. Mark adds: “There was even a section named the Seaside Sprint. But this was more like a 2km bouldering session along the side of the fjord. I wouldn’t call it running.”

There are many highlights to this event though. Mark says: “The views from what is known as Pulpit Rock are incredible. The tourists also look at you as if you’re totally off your rocker, which is funny.” 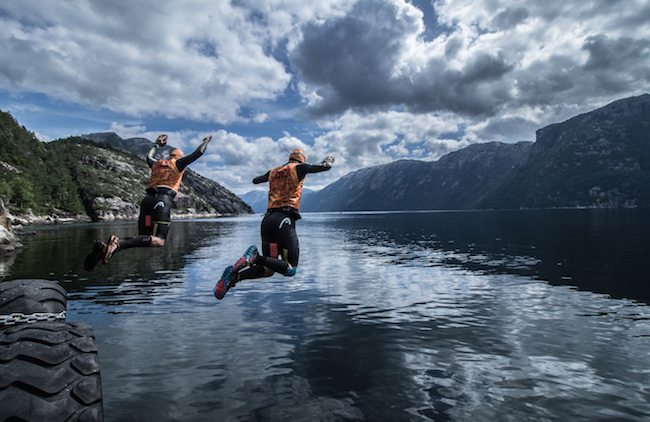 At the nine-hour mark – this is a very long race – there is a major cut off. For those that do not make this point in the nine hours they must stop competing.

Mark says: “Our race strategy was to go as fast as possible for nine hours then ‘enjoy’ ourselves. We were largely ahead of the cut off but a 7km uphill stretch slowed me down a lot. My wee legs were feeling tired. I felt for Emma who could have sprinted the hill.

“We arrived at the start of the final swim across the fjord before the cut-off point with an hour to get to the other side. That amounted to 2km in an hour, with trainers on, towing Emma in a fjord with decent chop and current.

“But I’ve missed the cut off before and I thought it was definitely achievable so I gave it everything I had. I never looked at my watch and I could slowly see Florli on the other side getting closer.

“We arrived at the checkpoint with 15 minutes to spare. I gave out a huge scream. Emma wasn’t sure if this was good or bad, but she quickly realised we had made the cut off.”

By this point, Emma was feeling the effects of the long swim in cold water, on top of the nine hours of racing. Mark says: “Without a giant layer of fat and fur like myself, Emma was pretty badly affected by the cold. The marshals wee mazing and had blankets and hot drinks to warm her up.” 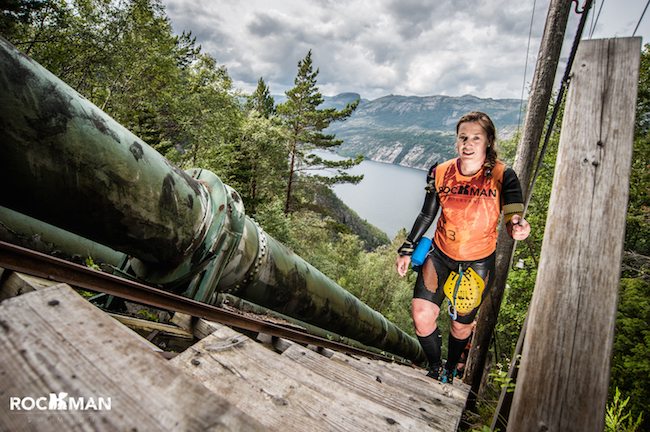 But there was more to come. Mark said: “The worst thing about making the cut off was we had to climb those 4444 steps. That was pure torture after the swimming and running we had already done.”

It took the pair an hour and 20 minutes minutes to reach the top and Mark admits it was almost as much as they could take. At the next aid station one of the marshals kindly gave them some of her packed lunch, which included chocolate spread sandwiches and coffee.

Mark says: “We must have looked in dire need of sustenance. It worked though and we sauntered down the last 6k with nearly a 1000m drop.

“Just before the end we heard over the loudspeaker that they were interrupting the prize giving to welcome a Rockman legend. The reception that Emma and I received from a crowd of about 300 people was incredible.

“After four years of trying and with the help of Emma, I had finally become a Rockman.” 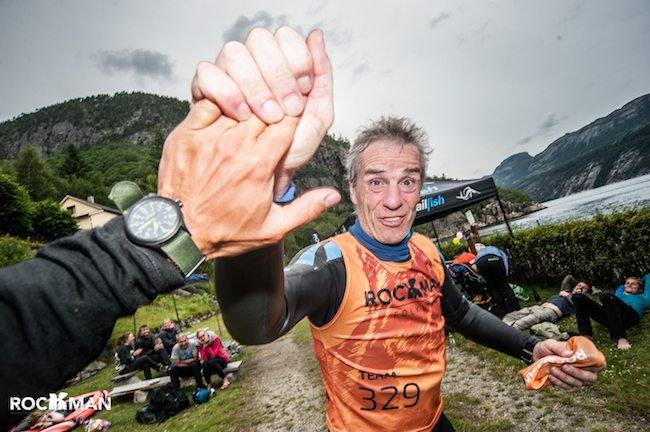