Steve Bate will participate in Ride Across Britain event.

The 39-year-old, of Moray, who has 6% of his vision remaining, will lead a group of 10 cyclists who are raising money for national disability charity Sense.

They hope to ride 969 miles from Land’s End to John O’Groats from  September 9 to 17 as part of the Deloitte Ride Across Britain event. It’s the first time it has been attempted on a fat bike. 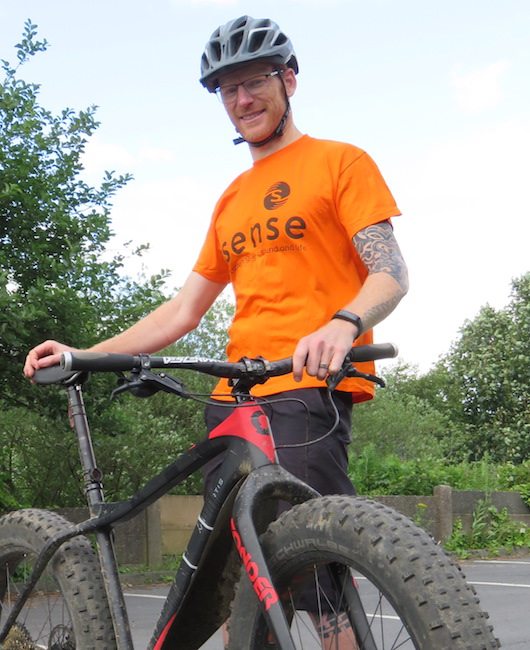 Steve Bate will take on the Ride Across Britain on a fattie.

Steve, who has Retinitis Pigmentosa and is originally from New Zealand, said: “The decision to participate in the Ride Across Britain is my way of showing support for a cause that is close to my heart. The people at Sense do incredible work supporting people with sight and hearing impairments to lead full and active lives. I was honoured, last year, to meet some of the people they work with, as well as the committed staff and volunteers that support them.

“I now can’t wait to take to the road on my fat bike. The bike [which is fitted with extra wide tyres and normally better suited to off-road terrain] will make the journey more challenging and I’m sure I’ll get lots of odd looks from the other cyclists. But, I’m keen to show that if you put your mind to something, you can achieve it.”

Richard Kramer, Deputy Chief Executive of Sense, said: “We are tremendously excited to have a double gold medal winning Paralympian as our ambassador for the prestigious Ride Across Britain event.

“Steve is wonderful person and an inspirational figure, who has overcome incredible challenges to achieve what he has, and demonstrate that where there is disability, there is ability.”

Steve is no stranger to epic firsts. Prior to his heroics at the 2016 Paralympics, in 2013 Steve became the first visually impaired climber to solo El Capitan, a 3000ft rock face in the Yosemite Valley, California.