Finn looks out over Glen Etive from Buachaille Etive Beag.

Earlier this summer I wrote about the Wilcox family, including mum and dad Stacey and Keith, and their five-year-old sin Finn. They planned to walk 20 Munros in four weeks and raise funds for a charity close to their hearts.

I wrote about the Munro challenge in the Sunday Mail. Five-year-old Finn is on a mission to climb 20 Munros in four weeks.

The family actually walked 22 Munros during their four weeks and enjoyed some amazing adventures.

Here is the story of their fantastic achievement. 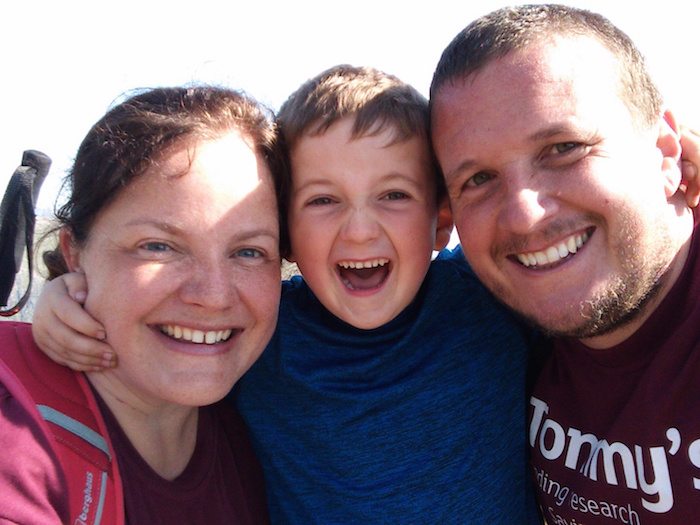 Five-year-old Finn Wilcox hikes mountains like other children climb the stairs to their bedrooms. Over four weeks of walking, the youngster summitted  22 Scottish mountains known as Munros.

In total, the youngster, who has just gone into primary two, walked 103.5km and climbed 7500m, which is more than four-fifths the height of Everest.

At the end of the challenge, Finn, who was accompanied by mum Stacey and dad Keith, said: “I have enjoyed walking lots of Munros with my mum and dad.

“I like seeing nature everywhere and all the frogs and lizards. I don’t like lots of boulders so much because it is hard work for me to climb over those.

“I do like seeing mum crossing a river and getting wet. That was funny.” 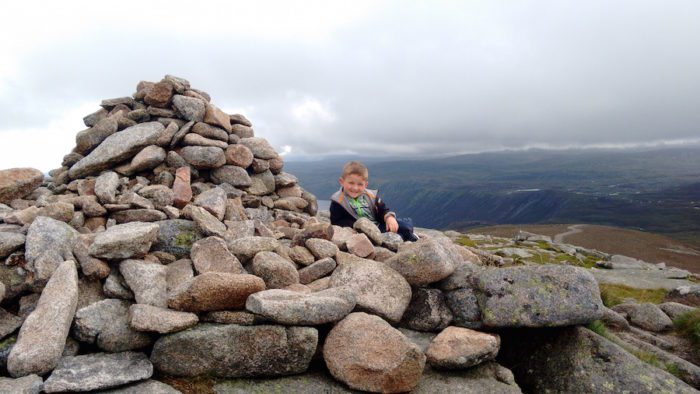 The energetic Perthshire family had set a summer holiday goal to bag 20 Munros in just four weeks. Impressively, they reached their total in less than three weeks – and went on to bag an extra two Munros before the end of the four-week goal.

Stacey, 36, said: “When the school holidays started we decided to do more things outdoors with Finn.

“The Munros are a great list of Scotland’s 282 tallest mountains and at least 3000ft each so we picked 20 of these to climb.”

While the summer adventure was physically challenging, Stacey and Keith, 37, reveal it was mentally tough, too. July was to be the due date of their second child, who sadly miscarried.

Stacey said: “We miscarried a child, Beanie, late last year and the closer we got to the due date, the more we thought about what could have been. We can’t change that it happened and miscarriage is horrible, but we wanted something positive to come out of this summer. We carried Beanie in our thoughts every day as we took on the Munros challenge.”

As part of the challenge, the family are raising money for Tommy’s, a charity that funds research into miscarriage, stillbirth and premature births. 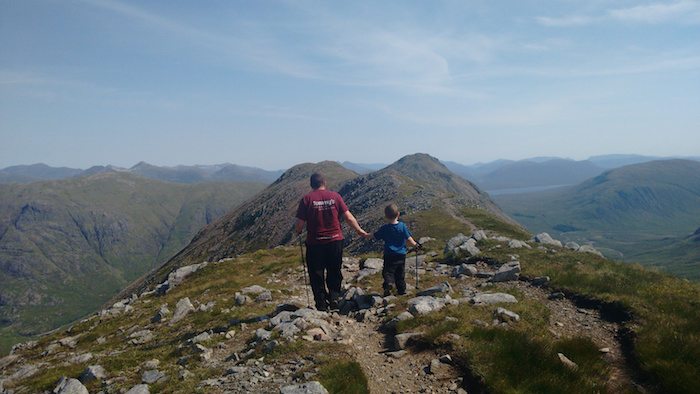 Good weather on the first day of their challenge on July 8, allowed the Wilcox family to make a good start. Over five miles, they hiked in the Glenshee area to the summits of the Munros, Creag Leacach at 3238ft and Glas Maol at 3503ft.

Keith said: “We started with a walk that was not too tough although we still reached the top of two Munros. It felt good to get going and we also thought we could have done more when we finished.” 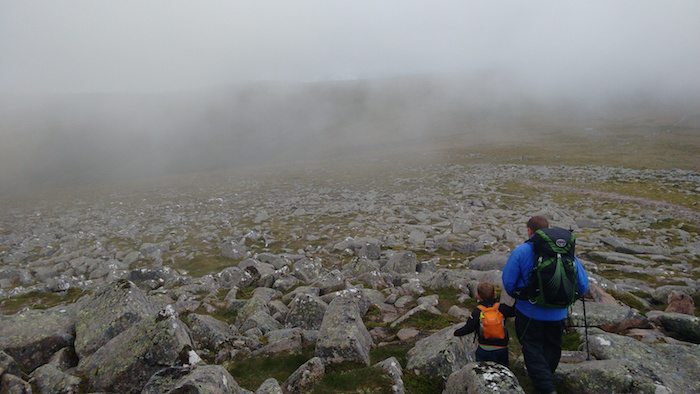 Over the following two days, the trio completed a two-day bike-and-hike adventure. Stacey said: “We chose a circuit walk in Lochnagar, in the Cairngorms, and planned an overnight camp. If we include a wild camp, Finn is more enthusiastic about the adventure.

“The weather was not so kind this time and it was non-stop rain from lunchtime to the next morning but we are all kitted out in the right clothing.”

The couple revealed that Finn renamed the walk “Frog-nagar” because there were so many frogs in the wet mountains.

Over the two days, the family cycled six miles and walked 12 miles to bag five Munros. They climbed a total of 4050ft, which is four times the height of London’s tallest building The Shard. 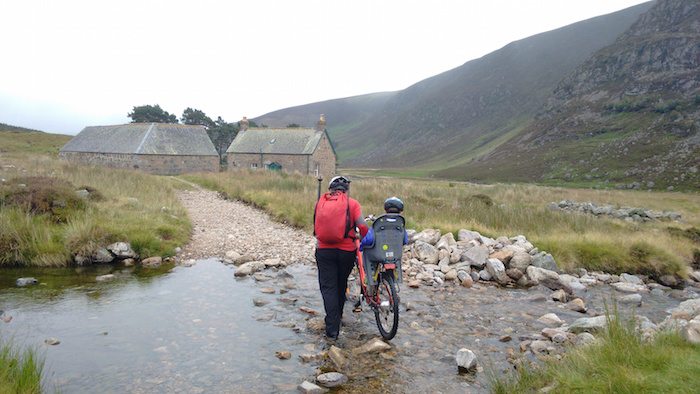 Coming down from Mount Keen.

A rest day was followed by another 12-mile two-day hike to bag four more Munros in the Drumochter area of the Highlands.

Stacey said: “These Munros have got a reputation for being a bit boring, but the views were incredible thanks to lovely weather Finn also loved all the wildlife. He has been absolutely amazing and just seems so happy to be outdoors with us.” 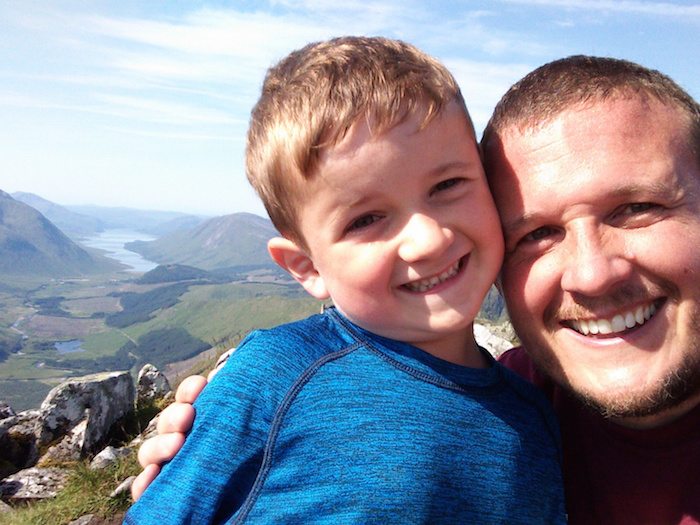 Finn’s love of the outdoors

Finn, who carries his own rucksack with emergency supplies, has been walking Munros since he was just two. He has now summited 44 Munros, of which 38 are first-time bags.

Keith said: “Stacey and I have always enjoyed walking and when we had Finn we were determined we wouldn’t stop. As a baby we took him up hills and mountains in a back-carrier. Then he wanted to walk with us. We began with easier Munros – the ones that start higher so they do not take so long.” 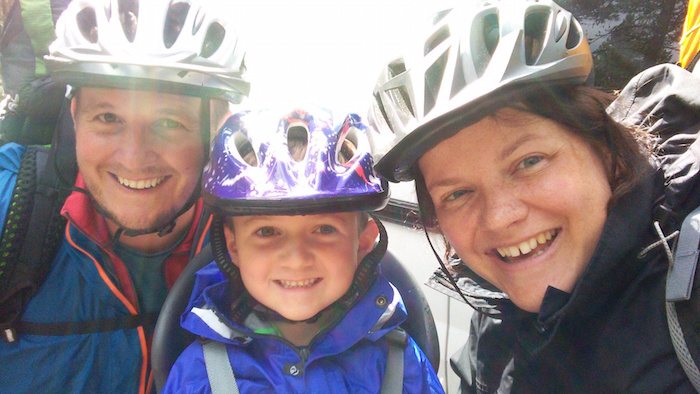 Getting ready to cycle to Derry Lodge for wild camp.

The family choose walking days when the weather is not too wet, windy or cold. Keith said: “Finn can’t cope in the cold and in strong winds and, anyway, we want the walk to be enjoyable so we pick our walking days.

“We are fortunate because Finn really does appear to enjoy being outdoors with us. For him, it’s about stopping to look at frogs, seeing tadpoles in a puddle, playing in a patch of snow and looking for a cave to sleep in. Although you can see that Finn is proud to reach the top of mountains, it’s more about the journey for him.” 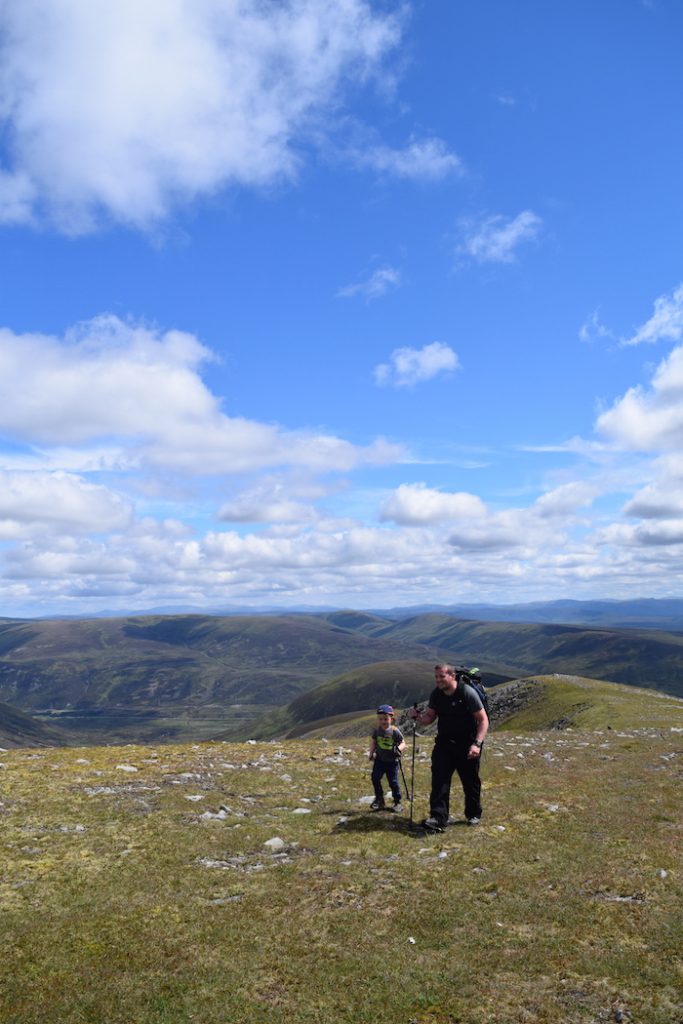 Finn’s determination to hike the Munros continued over another two days to the summits of the two Perthshire summits of Meall Corranaich and Meall a Choire Leith.

Stacey said: “These Munros are closer to home for us and a good choice for our tired legs.”

This outing included a wetter than expected river crossing for the mum. Finn said: “Mum slipped into the water, right up to her knees, and that was funny to watch. She had very wet feet all the way back to the car.” 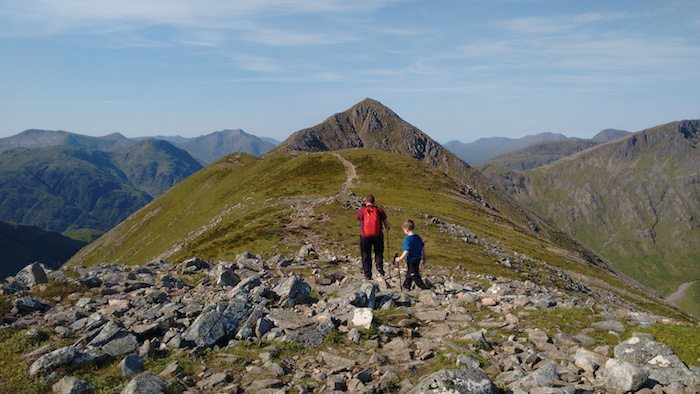 Keith said: “The steps are tall and they are hard enough for an adult but with Finn’s small legs they were a challenge. He was almost scrambling his way up those but he never moans. He just laughs and finds his on way to keep going.”

Mount Keen, the most easterly of the Scotland’s 282 Munros, was next on the agenda with a bike and a hike to the 3080ft summit.

Stacey said: “We found we were ticking off Munros much faster than we thought we would.” 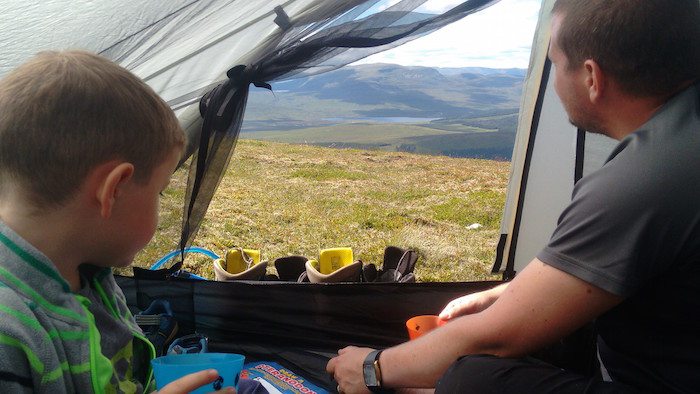 wild camp on the Saddle NE of Beinn Udlamain in Drummochter.

On a hike of two Munros, Dreish and Mayar, Finn was delighted to discover blueberries .

On another day, the family were lucky to just miss a huge rainstorm to reach the tops of Cairnwell and Carn a Gheoidh. They had ticked off 20 Munros at this point.

Stacey said: “We decided to walk a couple more Munros because we had days left. Finn was very keen to do so.”

To make it extra special, the family walked Beinn Bhreac for a sunrise on the summit. 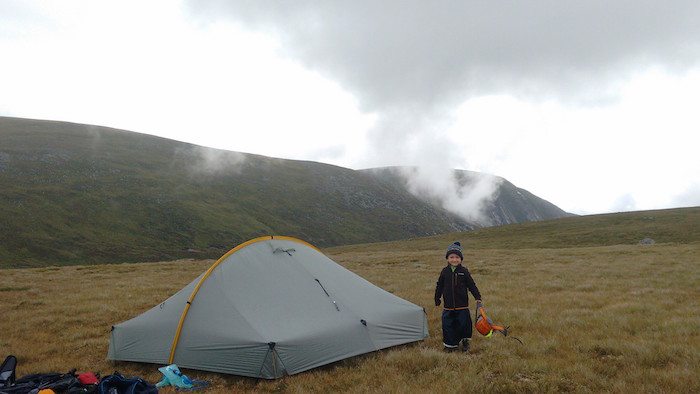 Camping at the saddle south of Carn an t-Sagairt Mor.

Keith said: “We camped at Derry lodge and set off from there at about 3am to get to the summit for sunrise. It was brilliant! We had a little early morning sing to Trolls music in our bothy bag on the summit and got some surprised looks from the earlybird walkers on our way down.”

Munro 22 was Cairn Asoda. Keith said: “We did this one with two of Finn’s friends. It was their first Munro and Finn’s 44th Munro hike. We all had a great time with loads of laughter despite the heavy showers.” 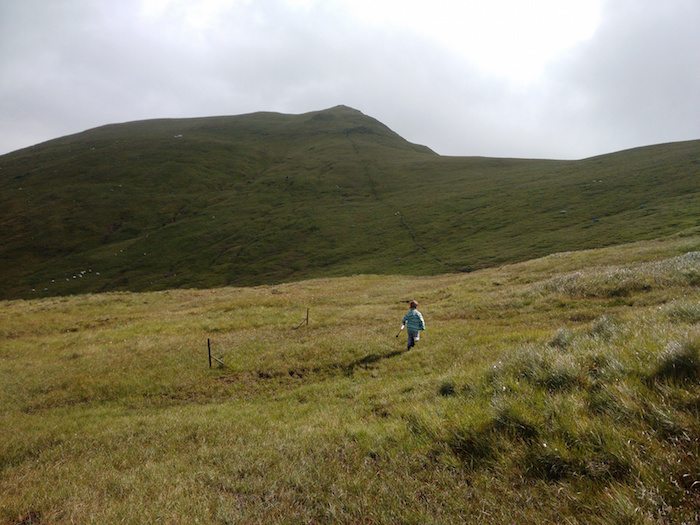 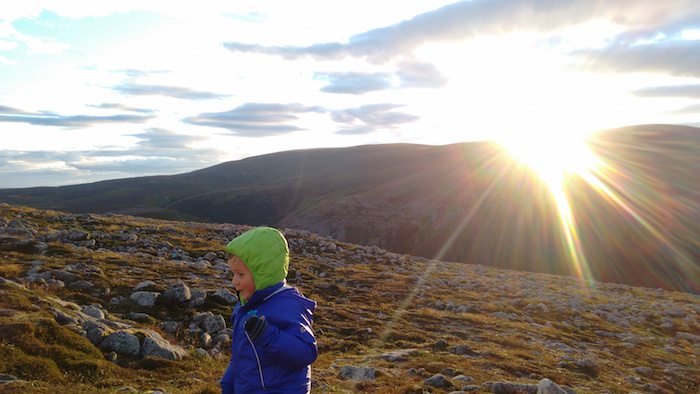 I am greatly impressed by this family and Finn’s love of the great outdoors. He has apparently asked his mum and dad if they could move home to be closer to more Munros.

See An Outdoors Family or follow them on Facebook. You can also give your support to their fundraising for Tommy’s.