The 53-mile Highland Fling Ultra was won this year by Kyle Greig and Rachel Normand. Kyle, who runs with Metro Aberdeen, finished in 7:06:58, while Rachel, of Carnethy Hill Runners, came home in 08:22:23 and in 13th place overall.

On April 28, 673 Highland Fling runners raced from Milngavie to Tyndrum on the West Highland Way. Conditions were warm (for once) although this mean that many competitors suffered in the heat.

For Kyle, 32, ultra distance running is a relatively new event. While he has been a competitive runner for 25 years, he ran his first ultra only last year at the Haworth Hobble.

This race formed part of the qualifying trail for the GB team for the World Ultra Trail Running Championship. He was selected and was the first Brit to finish (26th overall).

He then ran his first 100km race at Tarawera in New Zealand, which forms part of the Ultra Trail World Tour, and came fifth overall.

So, it’s safe to say, that Kyle could be confident of running a good time at the Fling. However, things did not go exactly to plan. 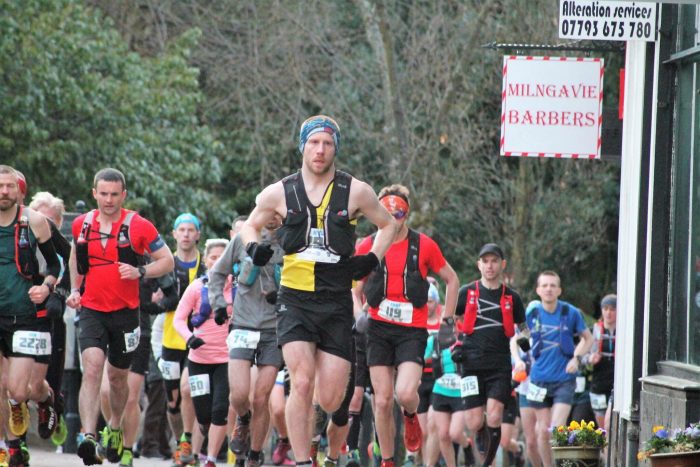 A strong start for Kyle.

Kyle, a Salomon ambassador, says: “When the gun went off at Milngavie, I took the lead immediately and focused on running my own race.

“At the first official checkpoint, 12 miles in at Drymen, I had about a three-minute lead and was apparently two minutes up on current course record holder and GB International Rob Sinclair’s split at that point from last year.”

The next section was Kyle’s favourite part of the course: Up Conic Hill. He says: “It was runnable, had breath-taking views and was tough enough to enjoy the burn. I could tell I was increasing my lead, as I felt good and I knew this was my type of course.”

The next checkpoint at 20 miles was at Balmaha where Kyle was delighted to see his wife Debbie, who was “cheering like a loony and being her usual positive self”.

Debbie told Kyle he was about six minutes ahead of the record. He says: “I tried to be as quick as I could through that CP, getting rid of my buff and gloves because the temperature was rising and collecting more fuel.”

Reaching the next checkpoints at Rowardennan and Inversnaid, Kyle continued to build on his lead and he was now a good bit ahead of the record.

But it went downhill from there.

A tough finish for Kyle

After Inversnaid the trail is notoriously tough. Kyle says: “The trail became technical and I was hopping from one rock to another over gorges, avoiding tree roots, jumping over puddles, walking slippery thin planks…you name it, it was probably in this section.

“I’m not going to lie, after completely f***ed up that section and I was so disappointed to lose so much time.

“I got to the checkpoint, only took a couple of Deb’s goodies – she’d added some extra treats to this check point thinking it would be a nice pick me up – but instead I told her how mad I was at myself and I was questioning whether I’d even win the race.”

(Kyle was 30 minutes ahead of second placed John Connolly (category 40) at the finish line.)

Next up was cow shit alley. Kyle said: “ I got covered. At this point I didn’t care too much, as it was just another thing to add to my list of things to be angry about. Tree roots is probably still at the top of that list though.

“Then it was up another hill, which, normally, I would thrive on. It was through a beautiful forest with views of the snow-capped mountains whenever there was a break in the trees.

“This section was not too bad underfoot and there was a lovely incline, followed by undulating paths with, again, stunning mountains in the backdrop.

“I saw Debbie again and I was getting calmer by this point because more spectators had told me I was miles ahead and so I just wanted to relax and be proud to be from this beautiful country.

“As I followed the river to the finish, I suddenly heard pipers. Could I finally be at this bloody finish line!? I was! I heard the announcer and the crowds. I turned a corner to what is so far the best finish line I’ve been on, although that could be because I got to high five as the winner of this prestigious race.” 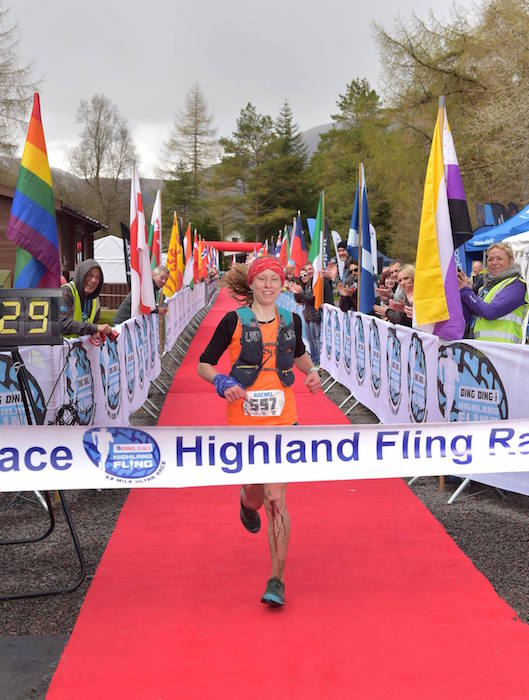 Rachel is first lady in the Highland Fling 2018.

Rachel said she was very shocked to be first lady to finish in this year’s Fling, although her third place from last year shows she is a strong runner.

Thirty-three minutes faster than 2017, Rachel also had to run hard in the final stage to stay ahead of second placed Nicola Duncan, who is also a good friend, who finished just four minutes behind Rachel. That is an amazingly close result over 53 miles of trail running.

The 31-year-old from Edinburgh reveals that she felt confident in this year’s training. She said: “My training had been much better than the previous year and I’d done loads of running on the course so I knew it really well.

“In fact, I ran the whole WHW over three days at Easter with some friends and that gave me a lot of confidence about the distance. I also trusted in my taper before the day.”

At the start of the Fling, Rachel was determined not to go out too fast. She said: “I ran to Drymen with two of the girls that I ran with at Easter and it was great to have a catch up with them.

“I caught up with my training partner, Nicola, just before Inversnaid and it was super fun sharing a few miles with her.”

In contrast to Kyle, Rachel loved the next technical section along the shore of Loch Lomond. She said: “I was able to push ahead here. I really like this part of the WHW and I tried to make good time.

“The sun was shining and I focused on having fun and I tried not to think about the fact that I was leading the race.”

The race gets tougher

The race became a little tougher for Rachel after Beinglas. She said: “My legs were cramping up a bit but my friends, Graham and Katie, were marshalling at Bogle Glen and their encouragement – and cola – gave me a huge boost. My only low point came after the road crossing, when reality hit with three miles to go.

“I couldn’t believe I was still in the lead. Luckily, I managed to hang on till the red carpet. It felt amazing to win. The marshals and supporters were all super friendly and I had such a great day.”