Cycling equipment company, Tailfin, is inviting backers to take advantage of discounted prices as part of a kickstarter project to create a new collection of bike packs.

It is similar to the bike packs that you might already have seen but has a more solid supporting structure, as well as a number of other useful features.

The AeroPack is a follow -up product to the Tailfin T1 carbon rack and pannier range, which launched in 2016.

There are three models that will be available at the launch: 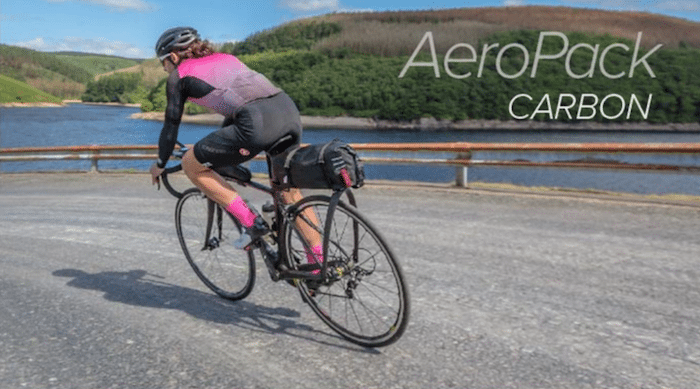 The AeroPack Carbon and the AeroPack Alloy features an integrated bag and rack system, in which the rack is permanently connected to the bag for improved weight reduction.

The AeroPack Trunk is the “bag only”, which mounts to Tailfin’s original T1 carbon pannier rack, positioning the bag directly behind the rider. It’s a great option for existing owners of the T1.

Tailfin states: “The AeroPack has been designed to solve the problems that traditional ‘soft-bag’ seat packs suffer from, such as compromised ride quality; time-consuming and challenging packing and access to kit; fiddly attachment systems; and compatibility issues with dropper posts, smaller bike frames and low saddle heights.

Tailfin AeroPacks are attached to your bike via a rigid structure and engineered pivots, joints and connectors. This eradicates the “tail-wag” that can occur with other seat pack systems. You know the feeling when your usual bike pack swigs or bounces about, such as stand up on the pedals to push hard uphill or you are descending tight corners or your ride rough tracks?

The aim of the more structured system is to ensure the bag is held more solidly in place. I like this idea, actually.

Depending on the model, the AeroPack can fit virtually any bike, be it road, gravel, mountain bike, fat bike or full suspension bike, with rim or disc brakes, and with or without dropper post.

The Tailfin Axle, which contains the lower mounting points, replaces either QR or through axles. It’s designed to work with even the latest standards, including boost or even super-boost spacing.

All three products in the AeroPack collection sit directly behind the rider for a great aerodynamic performance. It offers a significant advantage over traditional side-mounted panniers.

Additionally the AeroPack contains Twin Stacking Straps that allow extra gear to be stacked on top of the pack in the wind shadow of the rider.

From the wind tunnel tests, moving a nine-litre bar bag from the front of the bike to the top of the AeroPack saved around 10-20 watts of power (36kmh at zero yaw).

The AeroPacks are designed to be quick-release and can be attached to a bike in seconds without tools.

The bag is “high-frequency welded” (not sewn) and therefore completely waterproof. Uniquely, it has a wide-mouthed roll-top opening that runs lengthways across the top of the pack.

It’s easy to pack, unpack or organise your belongings, especially when it’s mounted to the bike.

Although the AeroPack is designed for wild adventures, it also fits a 13” laptop so it can be used in the city just as easily. This feature really appeals to me because I have never found a way to easily fit a laptop when travelling. It’s important for me to have access to a laptop for blogging on the go.

There are twin light mounts and dual-sided pockets, making it easy to access small items.

Check out the various options with the AeroPack kickstarter. You can simply make a donation or make a pledge, starting from £119, to save money on the cost of the new packs when they launch.