HuMPS finishers are Top of the Rocks

Alan and Rob on the top of the Old Man of Hoy. Credit: Richard Mclellan

This article appeared in my Sunday Mail outdoors column. 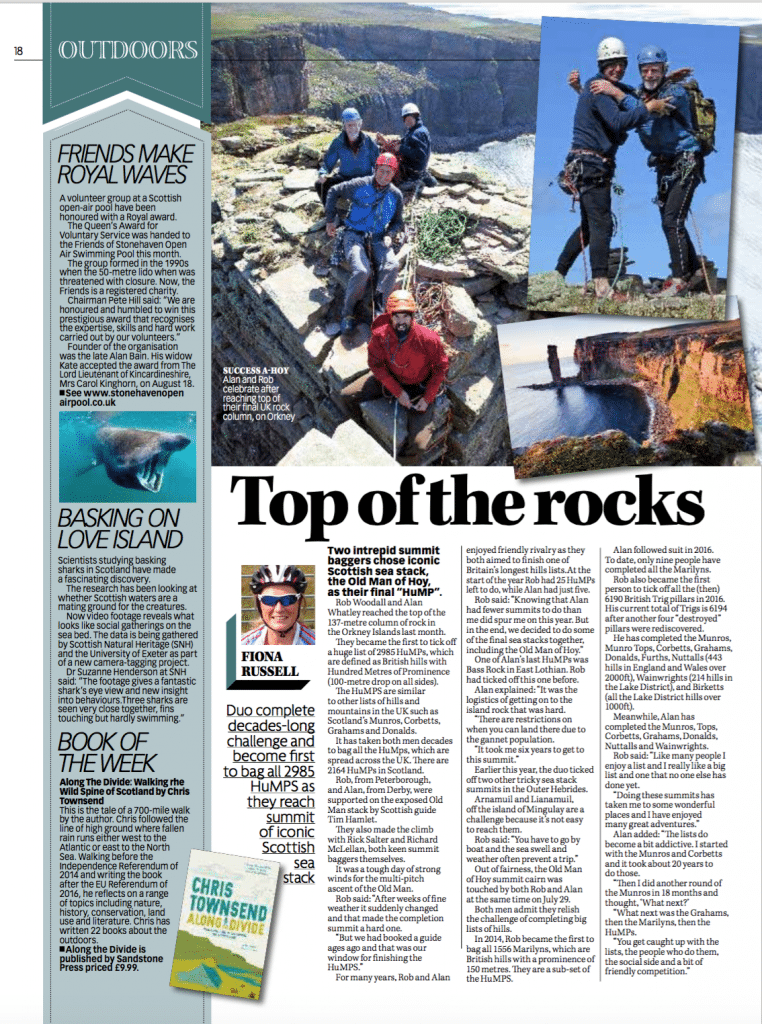 Rob Woodall and Alan Whatley reached the top of the 137 metre column of rock in the Orkney Islands last month.

They became the first to tick off a huge list of 2985 HuMPs, which are defined as British hills with Hundred Metres of Prominence (100 metre drop on all sides).

The HuMPS are similar to other lists of hills and mountains in the UK such as Scotland’s Munros, Corbetts, Grahams and Donalds.

It has taken both men decades to bag all the HuMps, which are spread across the UK. There are 2164 HuMPs in Scotland.

Rob, from Peterborough, and Alan, from Derby, were supported on the exposed Old Man stack by Scottish guide Tim Hamlet.

They also made the climb with Rick Salter and Richard McLellan, both keen summit baggers themselves.

It was a tough day of strong winds for the multi-pitch ascent of the Old Man. 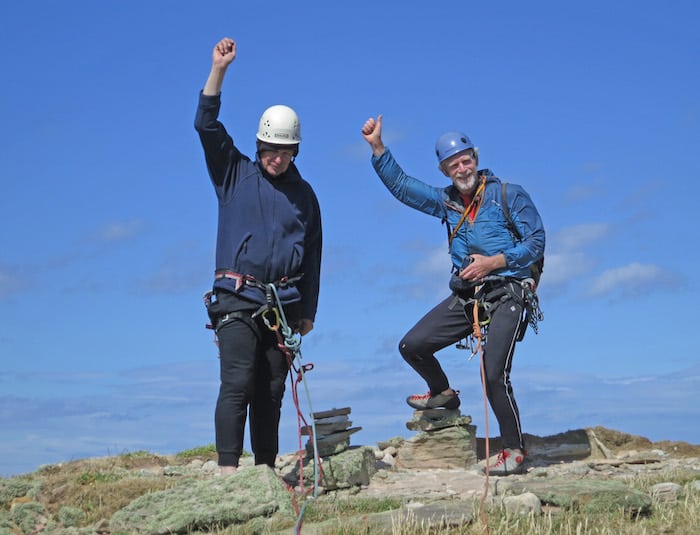 Alan and Rob on the top of the Old Man of Hoy. Credit: Richard Mclellan

Rob said: “After weeks of fine weather it suddenly changed and that made the completion summit a hard one.

“But we had booked a guide ages ago and that was our window for finishing the HuMPS.”

For many years, Rob and Alan had enjoyed friendly rivalry as they both aimed to finish one of Britain’s longest hills lists.

At the start of the year Rob had 25 HuMPs left to do, while Alan had just five.

Rob said: “Knowing that Alan had fewer summits to do than me did spur me on this year. But in the end, we decided to do some of the final sea stacks together, including the Old Man of Hoy.”

One of Alan’s last HuMPs was Bass Rock in East Lothian. Rob had ticked off this one before.

Alan explained: “It was the logistics of getting on to the island rock that was hard.

“There are restrictions on when you can land there due to the gannet population.

“It took me six years to get to this summit.”

Earlier this year, the duo ticked off two other tricky sea stack summits in the Outer Hebrides.

Arnamuil and Lianamuil, off the island of Mingulay are a challenge because it’s not easy to reach them.

Rob said: “You have to go by boat and the sea swell and weather often prevents a trip.”

Out of fairness, the Old Man of Hoy summit cairn was touched by both Rob and Alan at the same time on July 29. 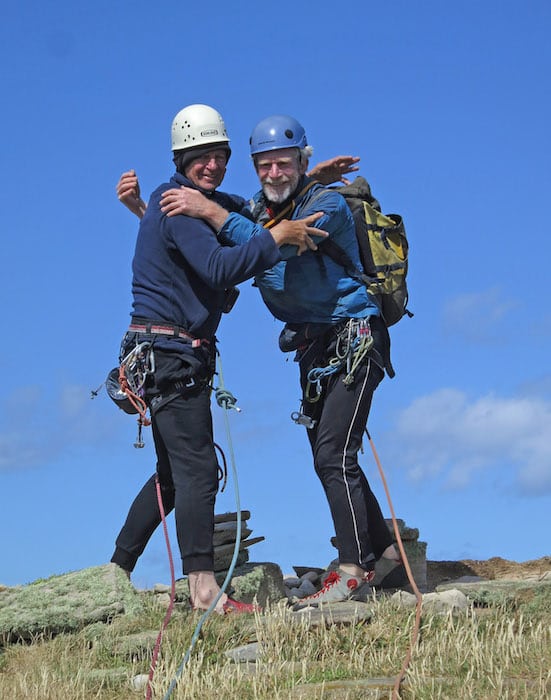 Both men admit they relish the challenge of completing big lists of hills.

In 2014, Rob became the first to bag all 1556 Marilyns, which are British hills with a prominence of 150 metres. They are a sub-set of the HuMPS.

Alan followed suit in 2016. To date, only nine people have completed all the Marilyns.

Rob also became the first person to tick off all the (then) 6190 British Trig pillars in 2016.

His current total of Trigs is 6194 after another four “destroyed” pillars were rediscovered.

He has completed the Munros, Munro Tops, Corbetts, Grahams, Donalds, Furths, Nuttalls (443 hills in England and Wales over 2000ft), Wainwrights (214 hills in the Lake District), and Birketts (all the Lake District hills over 1000ft). 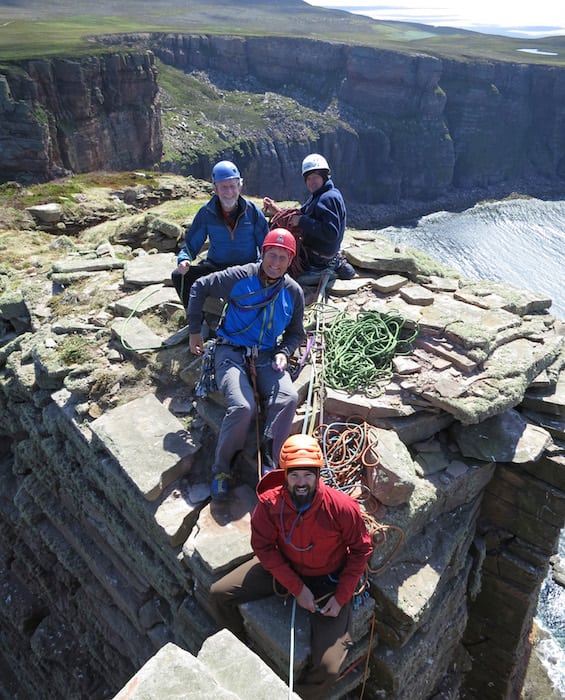 “Doing these summits has taken me to some wonderful places and I have enjoyed many great adventures.”

Alan added: “The lists do become a bit addictive. I started with the Munros and Corbetts and it took about 20 years to do those.

“Then I did another round of the Munros in 18 months and thought, ‘What next?’

“You get caught up with the lists, the people who do them, the social side and a bit of friendly competition.”