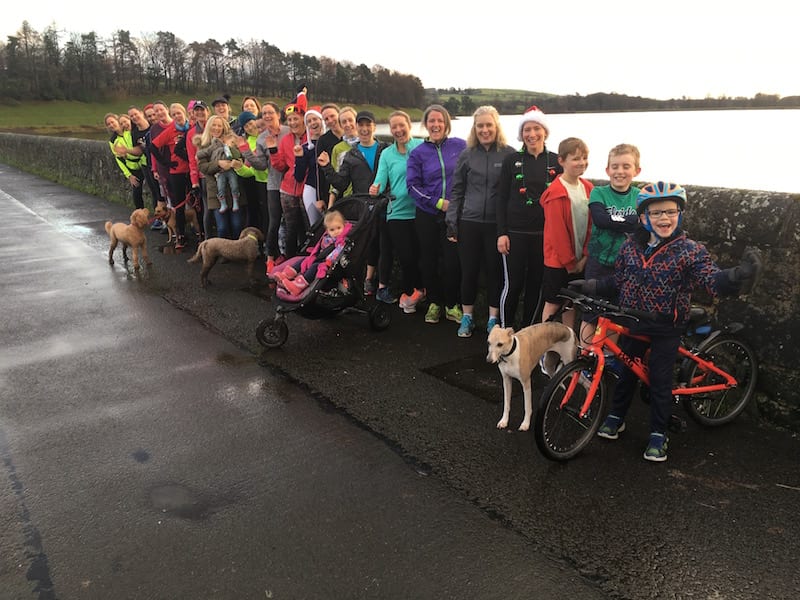 Many of the Milngavie Marcothon Mums.

A group of Scottish mums raised more than £10,000 for charity by running every day for a month.

The 33 women, from Milngavie in East Dunbartonshire, joined an annual fitness campaign called The Marcothon.

The brainchild of two Glasgow runners, Debbie and Marco Consani, The Marcothon encourages people to run three miles or for 25 minutes, whichever comes first, every day throughout December.

Since it’s creation in 2009, many thousands of people from across the world have been enthused to run the 31 days of December and in frequently challenging weather.

The Milngavie Mums’ Marcothon group – as well as three more women from England and Dubai – were motivated to participate in The Marcothon as a fund-raiser.

They focused on two charities, The Everest Centre, which is a specialist project within the Brain Tumour Charity researching slow growing brain tumours in children, and Bloodwise, which funds research to improve treatment for people with blood cancer.

Both of these charities are poignant to the Marcothon Mums because they have helped children and families connected to the group.

Linda Robertson, who came up with the idea, said: “I wanted something positive to focus on in December and the Marcothon seemed perfect.

“When I mentioned it to some local mums, it took off and I was amazed and delighted by the numbers that joined in.

“Every mum had to work around busy family and work schedules and it was so inspiring to see how they managed to squeeze in a run.

“Some went out each day at the crack of dawn, while others ran at 11pm.

“The weather wasn’t always kind, with frost, rain and hail, and each of us struggled at different times but there was a great group vibe and we were all thrilled to make it through 31 days.”

Linda’s other driving force was to support a charity that is close to her heart.

The mum-of-two said: “I also wanted to do something for my cousin’s young son Alex Lamberton O’Neill, who has battled brain tumours since he was three.

“He had a good year in 2018 but the latest scan showed a small growth, so Alex, now six, will need weekly chemotherapy, again, for the next 12 months.

“Hopefully the money we have raised will help to support research into new solutions to help Alex and kids like him to fight this horrific illness.

“Our original target for raising money was just £400 and I can’t believe how much we have now raised.”

In total, the mums have so far raised £10,006 including gift aid donations.

Three other mums in the Marcothon group revealed their motivation to join the running fund-raiser.

The charities were a big part of the decision for Laura McCorie to sign up to the Marcothon.

She said: “My family has been affected by leukaemia and blood cancer so it was great to be able to do something where I felt I could help.

“When it was cold, wet, or dark outside I just thought of them and that got me out the door.

“To have raised so much money is amazing and I am so grateful to all those who donated and all the support from the other runners.”

Jackie Mclaren described the Marcothon as an incredible journey.

She said: “At the start, running every day had never crossed my mind but now I feel fitter and have made new friends.

“Being able to raise money for two worthwhile causes as well made me determined to keep going.

“The amount we have raised has blown each and every single one of our minds. It is absolutely incredible.”

When the Marcothon was first mentioned to Kirsty Haggerty she thought she was far too unfit to give it a go.

She also has a busy home life with two older children and a new baby.

But when she saw what charities the mums were fundraising for she changed her mind.

Kirsty said: “My aunt was fighting a battle with a rare form of leukaemia and this was a huge emotional drive for me.

“Once I said I would do the Marcothon there was a huge support from everyone who was doing the challenge.

“Everyone struggled to fit in the time but amazingly we all managed to do it.

“I am also very thankful to all those who donated money to the two charities.

It is amazing what we have achieved.”

Sadly, Kirsty’s aunt has since passed away.

You can still donate at:  uk.virginmoneygiving.com/Team/MilngavieMumsMarcothon2018