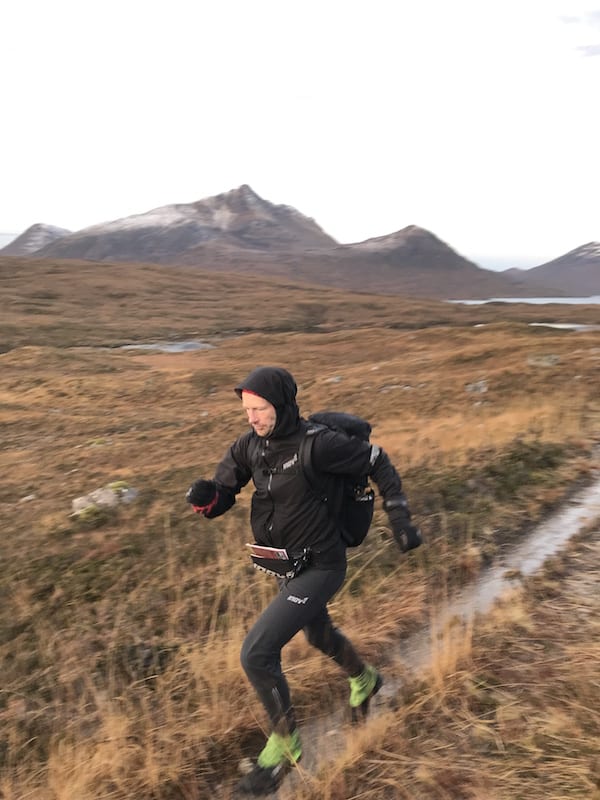 Most people take around 15 days to walk the challenging route from Fort William to Cape Wrath.

To make the record run all the more impressive, the pair completed it in winter.

The route is not waymarked and requires excellent navigation skills, especially through wilderness areas where there is no path.

They had only six hours of light each day and slept for just 11 hours in total.

Damian and Beth ran self-supported, which means they carried all their own kit and provisions but could access food and water en route, if they came across it.

They were not able to plan ahead to have people deliver kit or food to them.

The pair experienced many highs and lows. Damian said: “I confess the run was demoralising at times especially when we seemed to be going so slowly over difficult terrain.

“The lack of sleep also meant we were often running while exhausted.”

Beth found a section through remote Glen Torridon the hardest. She said: “It was really unforgiving.

“We spent almost an entire night covering perhaps 10 miles through a horrible, steep, rough mess of bog and boulders.

“It was difficult physically – and also mentally because we knew we still had so far yet to go.”

There were also the inevitable injuries. Damian said: “Towards the end, my body started to protest more loudly, predictably, and I got some tendonitis around my left ankle.”

Beth suffered with extremely sore feet and on the last night, when they rested for a short while in a bothy, she described being in a lot of pain.

Yet there were many highs for the friends, who have found success in long-distance running races.

Damian said: “Sunrise during the Cape Wrath Trail run was always a high point and it helped to revive us every single time.

“Finding ‘treats’ in bothies along the route, such as firewood or mattresses, where huge bonuses, too.

“And then magnificence of the scenery overall was thrilling. I loved the glorious remoteness of the trail and the long golden glens.”

Beth recalls the “special moment” when the pair set out on the challenge.

She said: “The first part of the journey is a short ferry crossing over Loch Eil from Fort William to start the run.

“I felt relieved to finally be stepping away from civilisation and I was excited to find out what the next few days would bring.

“Dawn was also a highlight for me. Each morning I quickly forgot the dark moments of the previous night, which seemed to go on forever.

“We were always greeted with incredible views at dawn and this brought me a renewed surge of energy.

“And seeing the beautifully remote Sandwood Bay in daylight was incredible.”

Damian and Beth were thrilled to complete the Cape Wrath Trail in the fastest known time.

They arrived at Cape Wrath, which is the most north-westerly point on mainland Britain, on December 13.

Damian said: “I cursed some of the landscape that we ran across at the time, but as soon as we finished I knew I would miss it.

“But it was so cleansing being in those remote places in such wonderful scenery. It was wonderful.”

Beth added: “For the last 15 miles it felt like we were running to the end of the world. But we made it.”

For both runners, the idea of the challenge lived up to their expectations.

Damian said: “We didn’t think anyone had tried to run the Cape Wrath Trail in winter before, so that made it a compelling idea.

“I primarily wanted an adventure and going for a record was secondary, but it added some exciting parameters to our trip.

“I also hoped we would show more people that Britain still has some wonderful areas of remoteness and wildness to be enjoyed.”

Beth was keen to take on a challenge that was different from her usual races.

She said: “I have got quite used to racing big mountain ultras and I love the competition of those.

“While things can – and do – go wrong in races, in reality there are very few unknowns and competitors are well looked after.

“I wanted to take on something more unpredictable, which would challenge me in a different way to racing.

“The Cape Wrath Trail in winter must be one of the most extreme trail running challenges to be had in Great Britain – and it was fantastic to take it on and to finish it.”

Read my blog about the Cape Wrath Ultra.