Spring skiing in Scotland: Why, how and where? 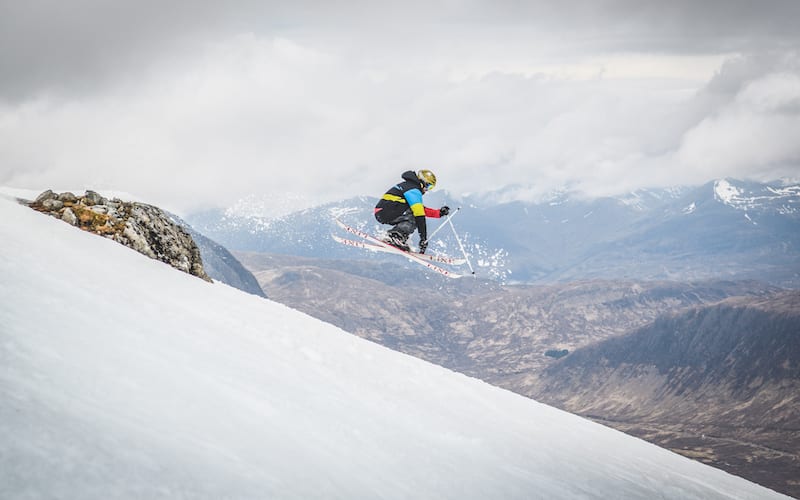 A skier launching off a rock in the Main Basin at Glencoe Mountain Resort, on a May Bank Holiday weekend. Credit: Steven McKenna Photography

In recent years, I’ve come to look forward to spring skiing in Scotland. While there is a smaller chance of fresh snowfall, warmer conditions mean that skiing can be very enjoyable on softer spring snow.

In spring, the days are longer, the sun is higher and bluebird days with no wind are far more likely. In addition, the snow will have evolved into the softer, larger-grained snow so typical of spring.

It’s a forgiving kind of snow and I am pretty sure it’s why I was able to ski Glencoe’s famously steep Flypaper last year.

How is spring snow created?

Overnight temperatures are still likely to plummet in springtime, compared to the daytime. This means that the snow will re-freeze after dark.

With the groomers working their magic, too, the pistes enjoy a smoothing out in preparation for the next day of skiers and snowboarders. Then, as the day warms up, the spring sunshine loosens the frozen top surface of snow to create a wonderfully soft ski slope.

Spring snow is described as corn snow. It can feel quite heavy and that requires are more aggressive style of skiing but the snow is generally forgiving and brilliantly non-icy.

The more sunshine on a slope, the greater the melt before the night-time comes again to start the re-freeze process, ready for the groomers again.

Scotland-based Blair Aitken, of British Backcountry, said: “The melt-freeze cycles of spring give predictability and stability to the snowpack.

“Skiers tend to follow the sun around from east-facing, to south-facing and then westerly to get the best of the softer snow. The snow melts in the warmth of the sun.

“While in Europe the snow-melt cycles often happen daily, in Scotland it can be a bit different. You can get a transformation of the snow to spring corn snow that holds for weeks before the refreeze, or an over-cooking by the sun and warm temperatures.”

George Reid, a mountain guide and ski instructor based in Scotland, sums up spring skiing. He says: “It’s hero’s snow. That 1.5 inches of soft snow created by the warmer air temperatures and sun of spring is wonderful. I love it.”

Stay in bed a littler longer

Contrary to the general advice for getting up early and enjoying the best of a day for many other spring activities, when it comes to spring skiing it is fine to set the alarm a little later.

Check that the skies will be clear overnight, which usually means the snow will re-freeze. For the first hour or two of the skiing day in Scotland, the ski slopes will remain hard and unforgiving.

But then, once the morning has warmed up a bit, the snow will start to melt and form that delicious spring snow.

It’s important to work out in which direction the ski slopes face. Then you will know the slopes that will be hit by the sun first. The sun will reach the slopes in this order: East-facing, south-facing, west-facing and, finally, those facing north, although the sun is rarely strong by this point.

You should aim to be at each of these slopes around 30 minutes after the sun gets to them. It could be a bit of trial and error, but in the Scottish ski resorts you will be easily able to reach different facing slopes within fairly short timescales.

Move on – and go somewhere else

What you will learn about spring snow is that it doesn’t last. The good conditions can come – and then become too soft and slushy because of too much sun.

Once you have enjoyed a couple of runs on one slope, move on to the next.

However, sometimes, especially in Scotland, the corn snow can stay day after day if the evenings do not get too cold. There is no predicting this amazing state of affairs but when it comes it feels like an end-of-season dream.

From ski resort base level it might appear as if the spring has melted all the snow. But head higher up and you’ll often discover some great slopes to ski.

This is because the air temperature remains lower at higher altitude and that means the snow will stay in better condition for longer into the winter/spring season.

Skiing in April and May really is possible in Scotland.

Remember, too, that you should be able to take advantage of ski resort uplift even if it’s late in the season. Check the Ski Scotland website before travelling to make sure the lifts are open.

Ski touring allows you to head off-piste, which is helpful if you are in search of late season snow.

I have enjoyed many days of skiing in spring temperatures simply because I have been able to hike or use my touring skis to reach the places where the snow has collected – and stayed.

Read my blog: Where to ski the steeps in Scotland.

And: 17 things I learned on a Wild Ski Weekend

It’s important to check the avalanche warnings before heading off-piste but if it’s deemed safe (and you have the right experience and equipment) you’re likely to find some great spring skiing locations.

Many corries and gullies, especially higher up and north facing, hold on to the snow into the late spring and early summer.

Amy Marwick, a British freeride skier and instructor based in Aviemore, has enjoyed spring skiing across Scotland and rates the corrie of Stob Coire nan Lochan and the slopes of Bidean nam Bian in Glencoe as her favourite spring skiing spots.

She says: “These places tend to hold the snow later into the ski season and there are plenty of line options to choose from depending on the conditions.”

Blair is a fan of spring skiing on the mountain Braeriach, in the northern Cairngorms. He says: “Higher up the slopes, there is often good snow even into the summer. This mountain has an array of interesting gullies and faces on a variety of aspects.

“The steep lines into Garbh Choire and Coire Brochain are exhilarating, while the ski to the shore of Loch Coire an Lochain is an absolute pleasure.”

For George, it’s the burn gullies of Tom, Dick and Harry in Glen Feshie that he enjoys in spring snow conditions. He says: “These can be superb when the spring snow is just right.”

How to stay safe when spring skiing

Be avalanche aware: If you are moving around the slopes, especially back country, it’s vital that you can read and understand the avalanche reports. The

Look out for rocks: As the snow melts and thins, rocks and debris can be a hazard. Keep a keen eye on where you are going.

Sun protection: Spring sunshine will reflect off the snow and leave you at greater risk of sunburn. Wear a high factor sun screen on exposed skin.

Layers of clothing: The weather and temperatures can be changeable for spring skiing so it is better to wear several thinner layers than one thicker layer. In this way, you’ll stay warm and dry when in the mountains.

Layer up with a base first (merino if you can), then a lightweight insulated jacket and a windproof/waterproof shell on top. Ski gloves and a neckwarmer are still needed when skiing even in spring.

▪ This blog post is published in association with Ski-Scotland.