Winner Chris beats his own record for STARMAN Night Triathlon 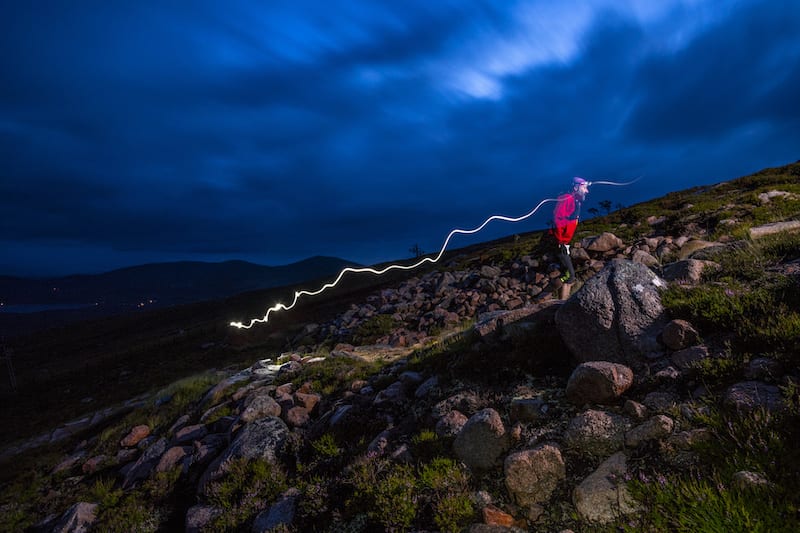 A runner in the STARMAN triathlon. Credit: Ed Smith.

Scottish athlete Chris Watson has broken his own record to win the STARMAN Night Triathlon again this year. The 32-year-old from Crieff completed the middle-distance triathlon, which takes place in the Cairngorms, in 06:19:55, which is a minute faster than his 2018 record.

The STARMAN Night Triathlon, which is organised by True Grit Events, comprises a 1.2-mile swim in Loch Morlich, followed by a 56-mile road cycle before running to the summits of Cairn Gorm and Meall a Bhuachaille.

Winner Chris said: “As far as venues go, can there be a more idyllic setting than the Cairngorm National Park for a memorable night out?

“Besides, if you’re going to push yourself to the limit, you may as well do it somewhere notable.

“The Cairngorms have always been a special place for me, and now they boast one of my favourite races.”

First female was Kate Pearson, 38, of Milngavie, who crossed the finish line in 07:45:23.  She said: “STARMAN 2019 was absolutely epic. Swimming under the bright moon and stars was magical despite the chop and the Scottish weather that followed us around the pitch-black bike and run course was strangely comforting.

“We were treated to a rainbow over Loch Morlich, which I witnessed from the summit of Meall a Bhuachaille. It more than made up for the pain of those relentless hills.”

Now in its third year, the STARMAN sold out the 100 entries. People came from as far afield as Cornwall and County Wicklow.

As well as solo competitors, there were relay teams of three people. The overall relay team winners were an all-female group from Perth Triathlon Club – Ashley Blundell, Lynn Gatherer and Ashleigh Jolly – who crossed the line in 6:38:57, four minutes ahead of the second placed male team from Dundonnell Mountain Rescue.

The first mixed relay team was made up of local athletes Philip Shipman, Nicki Diggins and Kirsten Marshall from local group, the Cairngorm Triathletes, in a time of 7:33:39.

The local team said: “As Cairngorm triathletes, it is wonderful to have an event like STARMAN on our home turf.

“We train and play in the Cairngorms all year round, but nothing can quite prepare you for the madness of the STARMAN. We will be back next year.”

One of the founders of True Grit Events, CarolineMacKechnie, said: “We are delighted that this year’s event was another huge success. STARMAN is fast developing a cult status amongst adventure triathletes.

“Everyone who took part gave 100% and really seemed to enjoy themselves, despite the huge challenge of the course and the weather.”

STARMAN Night Triathlon returns for 2020 on August 15 and 16. Register/enter here.