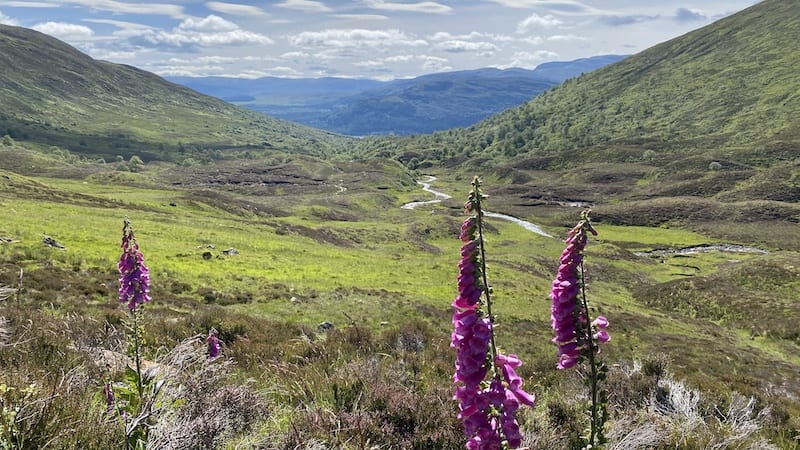 The Creag Meagaidh Circuit, including three Munros, Carn Liath, Stob Poite Coire Ardair and Creag Meagaidh, is one to save for good weather. The views are superb and when I first walked the loop a decade ago, the conditions worsened so by the time we reached the third summit of Creag Meagaidh, we could hardly see a thing due to rain and mist. In fact, we struggled to spot the cairn at the top.

This time, Hubby G and I ran-hiked the route on a sunny day and we headed clockwise. I preferred this way of doing the route.

Start: A large car park at Aberarder on the A86 between Laggan and Spean Bridge.

Creag Meagaidh is situated on the northern side of Glen Spean in the Highlands. A flat summit plateau gives way to several ridges. It’s most striking feature is the cliffs surrounding Coire Ardair on the north-east face.

We chose to run-hike this route. We warmed up with a gentle run on an easy-to-follow path heading north and then west through the glen.

The route starts a little above 200m and the path rises fairly gently to around 500m to 550m. It undulates as it contours along the base of the circuit of mountains. The views are of trees, wild flowers and high mountains.

At Locahn a’Choire, a steeper ascent starts to reach what is called “the window”. The cliffs of Coire Ardair offer a fabulous view, especially with the loch at the base. This corrie is popular with climbers.

There is a stiff climb up to “the window”, which is a bealach between two summits. At this point, we had planned to turn right and head for Stob Poite Coire Ardair. Hubby G is bagging Munros on his second round and he had already been to the summit of Creag Meagaidh twice.

But at The Window, I suddenly decided we should do the three Munros and complete the circuit. This meant another steep ascent to the south.

A plateau summit requires a walk of about a kilometre to reach the highest point. On the way, you pass Mad Meg’s cairn. According to legend, this cairn marks the grave of an 18th century suicide. The body was not allowed to be buried in the local kirkyards and so her family are said to have buried her on Creag Meagaidh. The old stone walls of the cairn have since collapsed.

This is not the highest point. A smaller cairn further on marks this at 1128m.

Back to The Window

We retraced our steps along the plateau, back down the steep path and to The Window. From here, the route heads north-easterly. Another fairly steep climb brings you amazingly speedily to the second Munro, Stob Poite Coire Ardair, at 1054m.

The views across to Coire Ardair are stunning, especially with a bright sun highlighting the natural hues.

It seemed so sudden that I had to check the map. From the second Munro of the circuit, we followed a fairly obvious path along an undulating plateau.

Brilliantly, we bumped into a couple we know but had not seen for about a decade. After a chat – and a promise to meet up again – we headed on. This part of the circuit offered excellent running terrain.

There is another high point at 969m, Meall an t’Shain, but this is not the third Munro, despite being above 914m Munro status.

The third Munro, Carn Liath, is some way further on. The path descends to a high beleach before we climbed again to reach 1006m above sea level and the cairn at Carn Liath.

We end up going a bit off-track for the first part of the descent. I think that if you are ascending to this Munro on an anti-clockwise loop, it is easy to pick up the right path uphill. The path is rocky and steep and we didn’t quite find it at first.

We ended up bashing through heather and bracken for a while before happening on the narrow path.

The route heads close to another high point of Na Cnapanan, or you can skirt around the lump in the landscape.

Some of the path felt more like a stream bed but it still offered the best escape route from the mountain because we no longer needed to fight our way through vegetation.

Eventually we reached the well-made track further down the glen and rejoined the same section of trail that we had started on earlier that day.

From here, I enjoyed the final couple of kilometres of gentle downhill and the chance to stretch my legs again at running pace.

This route is a great run-hike option and I have no doubt others could run it faster but we enjoyed the pace and the great views on a beautiful day.

See our circuit on OS Maps.