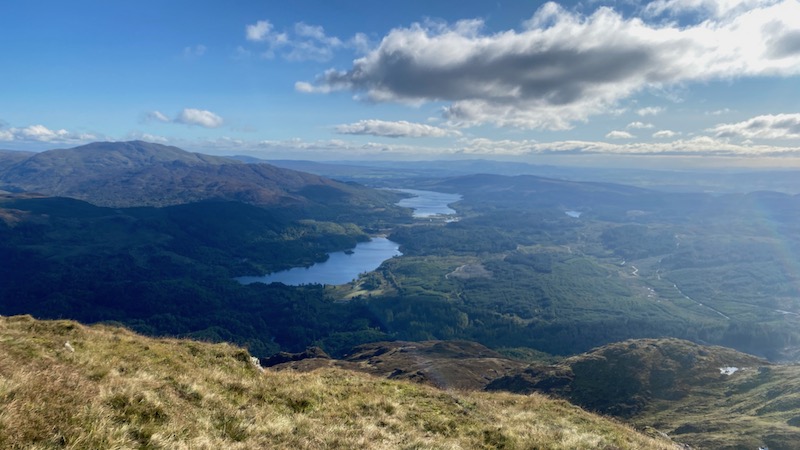 Blessed with many hills and mountains on my doorstep, and so close to Glasgow, Ben Venue in Loch Lomond & the Trossachs National Park is a favourite that offers a good half-day outing. I prefer to start from Kinlochard, near Aberfoyle, rather than the more popular start point of the Ben Venue car park at Loch Achray, simply because the path is less used.

Even so, the year of the lockdown has vastly increased footfall on many hills and mountains in central Scotland. This is a good thing in many ways because it means more people are benefitting from spending time outdoors, but it also means that some routes are too busy.

I try to avoid the most popular mountains or find an alternative and less frequented routes to the summits.

I recently enjoyed this route as a run-walk with my friend Lynsey. It was a sunny morning early in autumn and while the path on the southside of the mountain was fairly busy I am sure it wasn’t as well walked as the route from Loch Achray to the east.

Both routes join higher up the slopes but I much prefer the southern approach.

The route starts at Ledard Farm, on the shore of Loch Ard. After a few hundred metres, a sign points the way through a gate and on to a path that climbs quickly through a beautiful wooded glen and alongside a bubbling stream.

As we ran and walked (depending on the gradient of the path), we chatted and laughed. It felt great to be outdoors on a sunny day in autumn and with the goal of a summit to focus on.

The wooded glen finally emerges into a high glen with higher slopes climbing upwards on either side. The route follows an obvious and well-made glen path, which ascends gently at first and zig-zags over a narrow river a few times.

Remembering to stop to look back over our shoulders, we enjoyed views down the glen and to the loch now far below us. Many trees were beginning to display vibrant early autumn colours of red, orange, yellow and ochre.

Between our non-stop chat, Lynz and I took the time to relish the superb vistas, oohing and ahhing over how lucky we are to live within half an hour of one of Scotland’s two national parks.

Higher up the slopes of Ben Venue, the path becomes steeper and craggier. There are a few short sections where a little scrambling is required, although we rarely needed to use our hands as well as our feet.

Higher and higher with greater views

We pushed on, over-taking people who were enjoying a more leisurely walking pace and occasionally stopping to chat to anyone who fancied a conversation. One man told us he had slept out on Ben Venue in the hope he would locate a missing dog.

Neil Pratt is a member of the local Mountain Rescue Team and while a team search had been unable to locate the dog, Mia, he felt compelled to try again. (Although on this occasion, Mia wasn’t found, the Patterdale terrier did eventually turn up.)

The higher we climbed, the more we enjoyed an array of greater and wider views. Numerous mountain peaks emerged on the horizon and far below we spotted the many lochs of the national park.

Again, it was a delight to see the colours of the landscape as the seasons changed from late summer to autumn. I think that autumn is my favourite time of the year in Scotland because the scenery looks so utterly gorgeous. In addition, we are often blessed with good weather; colder but still bright and clear.

Lynz and I returned on the same route in high spirits before heading to nearby Aberfoyle for cake and coffee at MacGregors. The cakes in this cafe have to be seen to be believed.