How to have a great weekend in Krakow 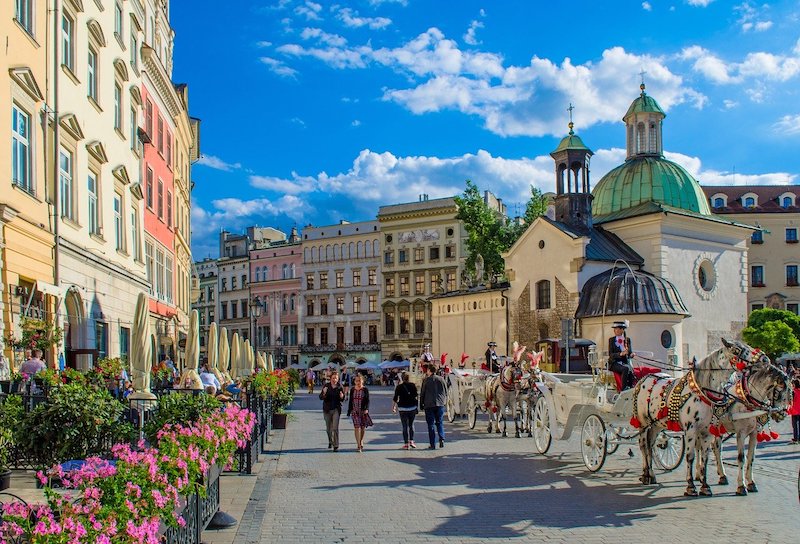 A short weekend break to a city is gaining more and more fans thanks to low costs and the possibility of tasting other cultures. One great option is Krakow. This beautiful city is located in Poland and is reachable from almost every bigger airport in the United Kingdom. What’s more is that tickets are very affordable.

Prior to embarking your Krakow journey, there are some things to check. Fortunately, the weather in Poland is very similar to the conditions in the United Kingdom, although often warmer in the summer months. However, if you are due to visit Poland in autumn do not forget to take an umbrella with you.

After around two hours of flight, you will land in Krakow, more accurately in Balice, where the airport is located (around 20km from the city centre). The airport is very efficiently connected with Krakow via bus or train. Tickets are available in machines located in the airport hall or train station.

Another possibility is taking a taxi. You will be driven directly to the door of your accommodation, however it can be expensive, especially at night.

The last and most secure option is Krakow private airport transfer. The driver will be waiting for you at the arrival hall with a signboard with your name on it, help with your luggage and drop you off at the door of your accommodation. The price is always the same and you do not have to wait.

The second closely located airport is Katowice-Pyrzowice. It is also easily reachable from Krakow. You choose to travel by bus or train. Taxis are also available although the distance is 120km, so it can be a bit expensive. The great option is also Katowice airport transfer.

The most recognisable Krakow’s monument

The main point of the city, and also the most iconic, is Wawel Castle. This old, historic building is situated on the hill towering over the river. The castle is an excellent point to start every Krakow journey.

It is worth pointing out, that Krakow is former headquarter of Poland. Hence, Wawel was inhabited by Polish Kings, so the city’s story goes back to the early 11th century.

Wawel has been a political and administrative centre for years. Due to this there is a great deal of luxury and splendour in the architecture, with towers, cathedral, courtyard and gardens in the Wawel Hill area.

Among restored buildings and a lot of tourists, we can find some fascinating exhibitions. All are associated with a king’s life – Royal Private Apartments, State Rooms, Crown Treasury and Armoury… Here you can see how kings used to live.

No less impressive are the royal gardens, consisting of the upper and lower terrace and a small vineyard.

A dragon in Krakow?

As a curiosity, there is a legend about Wawel’s Dragon. His lair was said to be a cave at the foot of Wawel Hill, on the bank of the Vistula River. Now, you can find a metal sculpture of Dragon located in front of the den. For further tourist amusement, the sculpt breathes fire at times.

With only limited time on a weekend break, it’s great that there are plenty of activities available after dusk. One of them is Vistula Cruise by night.

Even though it may seem, this is not only a summer proposition. It is organised all year round. Krakow looks beautiful all year round, but especially in winter, blanketed with snow and reflecting the night lights.

The river cruise is one of the most underestimated entertainments in Krakow. The Vistula is also called the queen of Polish rivers. In Krakow, it is the boundary between the northern and southern parts.

Cruising the Vistula allows you to notice many attractions, such as Wawel Royal Castle, the Monastery of Norbertan Sisters, St Margaret’s Church and St Salwator’s Church, the Kazimierz Jewish quarter and the stunning Wawel Hill.

While visiting another country, besides sightseeing and exploring a new culture, it’s fun to taste the traditional cuisine. One of the most popular places, where you can try original food and feel like a citizen, especially by night, is located in the heart of the Jewish quarter – Kazimierz.

Try the famous zapiekanki, which is a baguette topped with cheese, white mushrooms and other ingredients on-demand. It is served hot, directly after being taken from the oven.

Why it is so famous?

On the Plac Nowy, in the middle of Kazimierz district, you can find the dodecagonal red-brick building. It used to be the house of a kosher butcher’s shop in the 20th century, now adapted to an outdoor food court. Here, in numerous stalls, you can order various kinds of zapiekanki. It is also a popular neighbourhood with plenty of pubs.

In Poland, motorised food vans are popular. Look out for vans serving Krakow’s traditional dish, Maczanka Krakowska, which is a local alternative of shoarma. Pork meat is marinated for 48 hours, then long-baked at a low temperature and stewed with onion. It is served in a hot bun with other ingredients like pickles, mushrooms, cheese and jams. It depends on your choice.

Maczanka is also called the first Polish fast food, as in primary version has been eaten by cabmen in the 17th century.

Krakow is a great place for two or three days for a short city break.