Great adventure: Running the length of the Isle of Skye 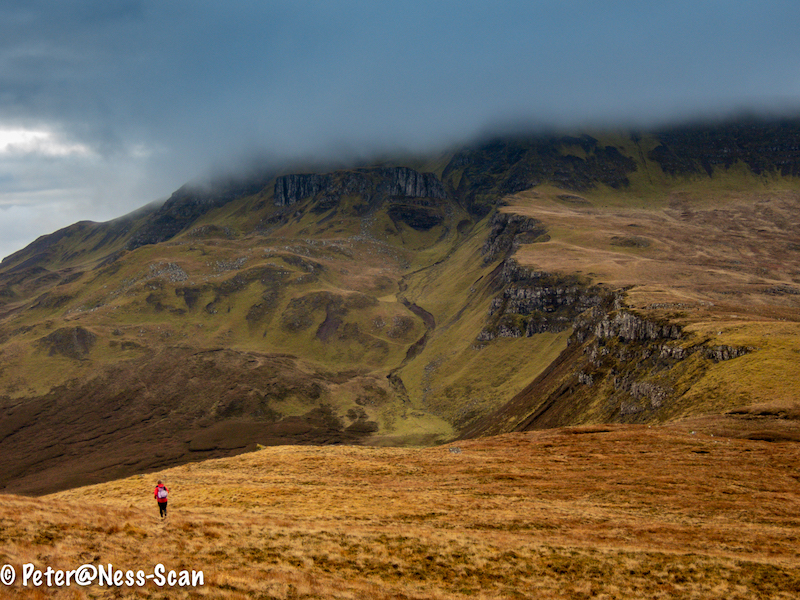 Two friends, Katy Boock and Karen Frake, enjoyed a winter run along the length of the Island of Skye. They followed the Skye Trail Ultra race route and took two days to complete the adventure. They were supported by Katy’s husband Peter Ferguson.

The route starts at Kilmaluag and heads along the Trotternish ridge to Portree, follows a coast road and tracks to the Sligachan, through Glen Sligachan to Elgol, around the coast back north to Torrin and around the coast again to Broadford.

The terrain is a mixture of bog, no path, faint path, good paths, tracks and road.

Katy says: “Navigation is required on the Trotternish ridge because there is often no path and it can be tricky to find the route if it’s poor visibility.”

The adventure took place over two days. Katy left her van in Portree and took the bus to the north end of Skye. She stayed in a “lovely B&B”, The Bridge, in Kilmaluag, on Friday night.

On day one, Katy and Karen set off from Kilmaluag and Katy stopped at Portree and Karen carried on to Sligachan. Katy then drove to meet Karen at the Slig “because I didn’t fancy the long road section for running. It destroys my knees”.

Having the van, also meant they did not have to carry camping kit while running. Katy slept in her van and Karen in her tent and she had the benefit of warm clothes and lots of food when she finished.

Peter travelled by train and bike to meet the pair at the Slig. Peter offered support on day two.

ON day two, Katy and Karen ran to Elgol, where Karen stopped because she had developed a sore knee. Katy carried on and met Peter at the half-way point for that day.

She continues: “I knew there was be a road again, so I’d decided to cycle from there on the road and as much as I could on the coastal path to the finish in Broadford.

“It was an ‘interesting’ route on a gravel bike in places but I was glad of having a light bike when I had to carry it or lower it down the steeper sections.”

She adds: “I do love a good logistics plan.”

Why the Skye route?

Katy says: “Karen and I both love long journeys in the hills and winter is a good time to explore the glens and coastal routes instead of the high places because it doesn’t matter if the weather’s wild. In fact, wild weather can make it even better.

“We had very benign conditions on this trip, especially for November. I’ve done the Trotternish ridge race, which is in June, in terrible conditions twice. There was cloud on the tops on the ridge but that just made the views and skyscapes very dramatic. It wasn’t windy or particularly cold.”

Katy describes the highlights as the B&B, sunrises, the views, the full moon silhouetting the Cuillin, seeing an otter in the sea at Camasunary, exploring some new bits of Skye, the final descent on her bike and the wee greenhouses outside the Portree Hotel. She says: “The wee greenhouses are a splendid idea, where you can be socially distanced and cosy while having a drink/meal.”

She reports no negatives. She says: “If you have the right kit and have planned to be out for a long time, it’s a lovely feeling to be able to spend so much time in the hills. I’m very lucky to be able to do that.”