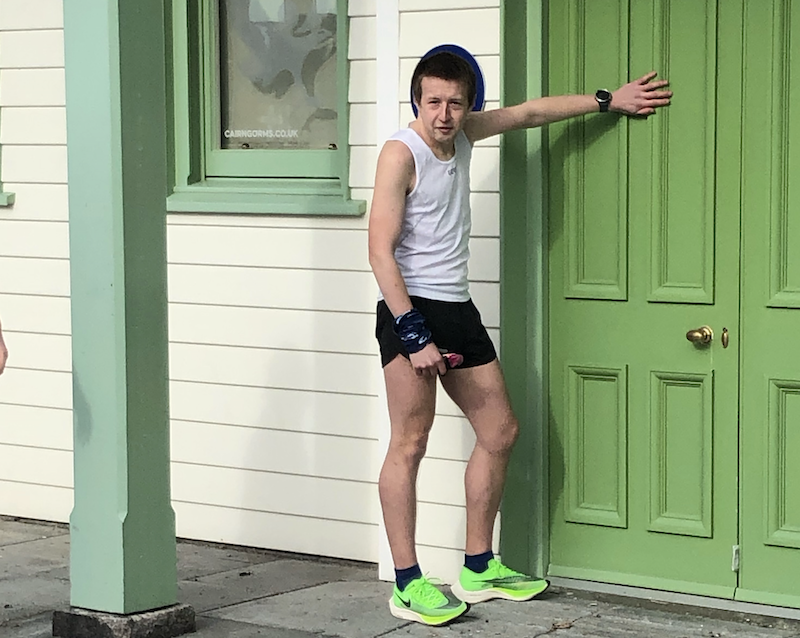 Jason Kelly, 25, has set a new Fastest Known Time for running the Deeside Way. The Metro Aberdeen Running Club athlete completed the 70km route from Ballater to Aberdeen in 4 hours 45 minutes and 46 seconds.

Jason, of Stonehaven, Aberdeenshire, had been hoping to defend his title in the D33 Ultra event this year but it was cancelled due to Covid lockdown. He ran 3:22:53 in 2020.

Setting a new FKT on the Deeside Way

Jason, the assistant manager at Run4It in Aberdeen, said: “My training had been focused around the 2021 race since the start of the year. When the news of the cancellation of D33 came in February, I decided to put the training block to good use and aim to run the full Deeside Way, which is just over 70km (43.5 miles) and go for the FKT.

“I had read a newspaper article in early February about my running club mate Bryan Kinghorn having established the FKT for this route in late December last year and that is what initially put it on my radar.

“Bryan ran it in 6:00:49 in his first ever run above marathon distance and I did some calculations and concluded that I thought I could do it in under five hours.”

He said: “My target was to hit the marathon split at Banchory in three hours, which was on pace for a 4:58 finishing time and then try to pick up the pace from there if I felt okay. The toughest sections are over by this point and the underfoot conditions are at their best heading onwards.

Jason ran west to east. He said: “I think this is the obvious direction as there is a slight net downhill of about 180m in that direction. I did it as a supported run so I could travel light and fast.

“I was supported by a few accomplished athlete friends with Victoria Presly providing me with drinks and gels at five locations. Chris Cowley joined me for the first 24km on foot and the final 10km on a bike. Robbie Simpson rode with me for a few kilometres after Banchory, too.”

The weather conditions were perfect on the day with a light following wind and dry underfoot conditions, which limited the amount of mud. Jason said: “The temperature was just about spot on as well and I ran in a vest and shorts with one or two moments where I even felt fractionally too warm, which is not a common occurrence in Scotland in March.”

‘I was pretty focused on Deeside Way FKT’

Jason confesses that he didn’t think about much or take much in during the run. He said: “I was pretty focused the whole way. It almost seems like a bit of a shame because there are parts of the route that are really nice places to run. But I had business to attend to!

“There was one highlight, however, because my dad who is 58 was also running the full route but doing it unsupported. He set off 30 minutes before me and ended up finishing in 5:22:38, which meant that I went past him with about 7km remaining.

“I tried to give him some words of encouragement but I was pushing really hard and was pretty deep in the pain cave at that point.”

A wobble at halfway

Jason said he had a slight wobble at around halfway though the Deeside Way when he was going through the Scolty Wood section.

He added: “That’s the most undulating section and I just felt a bit flat and lacking energy on some of the small uphills, which was a concern at only halfway. This didn’t last too long though and after my next gel I got back into a good groove and on the downhill out of the forest and into Banchory, just before the marathon distance, I was feeling really strong again.

“The last 10km was really hard work but only because I was pushing the pace pretty hard. I think I could have cruised it in relatively comfortably to make the under the five-hour mark but where’s the fun in that?

“It’s definitely a bit masochistic but I love that feeling of really digging deep and getting to the finish with absolutely nothing left to give.”

Jason reveals that his ability to set a fast time on the Deeside Way is because of “training, training and training”. He said: “I had my best ever year of training in 2020 with 19 consecutive weeks of over 100 miles a week from April to August, which was only brought to a halt by a couple of weeks of illness issues. It wasn’t COVID thankfully.

“I then had a few easier months and managed to get a couple of good race performances in before the next lockdown.

“Since the start of 2021, I had been averaging 110 miles a week with some solid long runs and some good sessions and I was just feeling in excellent shape.

“Working in a running shop, I get asked all the time what the secret is to getting quicker. The answer is that there isn’t one, you just have to put in the work and run a lot of miles consistently.”

Jason is sure other runners can run the route faster. He said: “There are a few guys in the area who could run it faster than me when they’re in good shape.

“The likes of Robbie Simpson has said that he might try it at some point and he could certainly knock a chunk off my time. I think I could probably shave a little more time off as well if I went with a more aggressive early pace but then you run the risk of blowing up and having a miserable slog to the finish.

“I’d like to see a few more people have a crack at it and I think there’s a good chance I’ll do it again at some point. It would be nice to hold onto the FKT for a while though.”

Who is Jason Kelly?

When Jason started running in 2016 at the age of 20, he was two stone overweight. In 2017, he started to take the running more seriously.

In late 2019, he had his first focused attempt at an ultra. He entered the Foxtrail Nocturnal Ultra, which is a six-hour timed night race around a 5km trail loop. He won in a new course record having run 16 laps (80km).

Then came the D33 win in March 2020. Jason said: “This was probably my ‘breakthrough’ ultra performance when I won the race ahead of two recently selected Scotland internationals in the second fastest time in the 10-year history of the race.

“I also had second place finishes at the iconic Lairig Ghru mountain marathon, the Bennachie Ultra and the Speyside Way Ultra in 2020.”

What’s next on the racing scene?

Jason said that the last couple of years have been “all about working towards earning a Scotland selection, ideally for 100km”.

He added: “I think I suit ultras quite well and it has certainly become the discipline I seem to be strongest at. Depending on how restrictions play out in the next couple of months, I may race either the Hardmoors 110 mile in late May or the Moray Coastal Trail 50 mile in early June. However, my main focus will be racing a 100km race this year and hopefully earning a Scotland vest within the next couple of years.”