Runner traverses Kilpatricks and Campsies hills in one outing 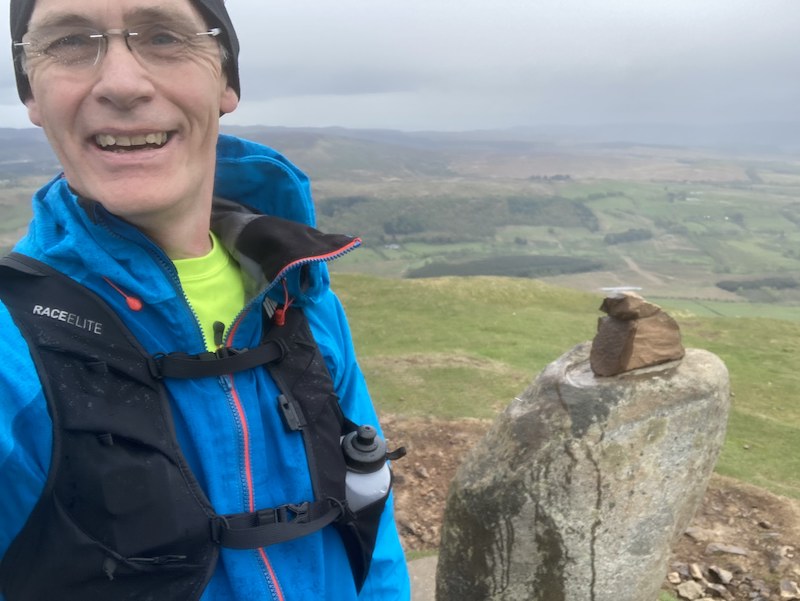 Alan Owen completed an unsupported 33-mile run across both the Kilpatricks hill range and the Campsie Fells. His route, from Overtoun House, near Dumbarton – where he was born – to Colzium Park in Kilsyth included some 6000ft of ascent and took nine hours, 40 minutes (moving time was eight hours).

He took in the summits of Middle Duncolm and Duncolm in the Kilpatricks, as well as Dumgoyne, Earl’s Seat, Holehead, Meikle Bin and Tomtain in the Campsies.

The 53-year-old from East Kilbride has completed a few Scottish ultra races, such as the Devil o’ the Highlands, Glen Ogle 33, The Fling, Jedburgh Three Peaks and the Lairig Ghru hill race.

While training for this year’s Great Glen Ultra in July, he came up with the idea for the long hill run. He says: “Both sets of hills are there in front of me as I drive from my home to work in Glasgow. I thought that joining up the Kilpatricks and the Campsies should make a great day out.

“However, timing never seemed to be right and whenever I have felt fit enough for the route I was too close to an ultra race to recover.

“When I did have time, the usual runners niggles always seemed to get in the way of training and so the route felt too long.

“This month, the random factors aligned to make it possible. I needed a training route for the Great Glen Ultra that would be hard with decent elevation and which would get me plenty of time on my feet.”

Alan explains why he chose to start at Overtoun House. He says: “Overtoun House was a maternity hospital in the 1960s.  I was born there and last weekend would have been my the 90th birthday of my mum, who died a few years ago, so it all seemed to add up.”

Highlights of Kilpatricks and Campsies traverse

At the start, Alan took a couple of minutes to look at Overtoun House. He says: “I knew about the house but I had never seen it.  My mum used to say I liked the hills so much because I was looking out the window at them when I was in hospital.

“It is a nice thought, but as a newborn I suspect I spent most of my time sleeping and looking for food.  So, she was kind of right, because that description fits better with training for ultras.”

Alan enjoyed crossing the Kilpatricks. He said: “Once I was up high, it was fantastic and it felt like a tamed set of hills with paths in all directions.  The view of the Campsies and Tomtain way in the distance from the top of Duncolm was magnetic. It made me want to get on and get there, rather than putting me off.”

Another highlight was climbing Dumgoyne. It was Alan’s first time on the summit. He says: “I always just bomb past it in a car on the way to somewhere else to run or walk. It was a new hill summit for me and the clear views were a bonus.”

It was the section from Earl’s Seat to Holehead that proved to be the most testing. Alan says: “Everything was as I expected until I got to Earl’s Seat. I had never climbed Dumgoyne or been on Campsies this side of the Crow Road before.

“I guessed it was all heather and tussocks after Earl’s Seat – and I was right. I was hoping for more obvious sheep or deer trails to run on but there was nothing I could see at the time.

“Instead, I took as straight a line to Holehead trig as I could. It proved to be much slower than I wanted to go, but to try to go faster would have been a waste of energy.”

Another section that proved arduous was from Meikle bin to Tomtain. Alan says:”I got the route wrong. I changed my mind from my pre-run plan and went with what looked like an easier route (through wee bit of trees) to the forestry track.

“I dropped more height than I wanted to and there were trees down all over the place which meant I slowed to a crawl as I picked my way through them. Plus the rain had started while coming off Meikle Bin and rain always adds to the whole experience, eh?”

Overall, Alan describes the traverse as a great experience, although it took him a couple of hours longer than he thought it would.

Read about my rather short looking Traverse of the Campsie Fells run, too.