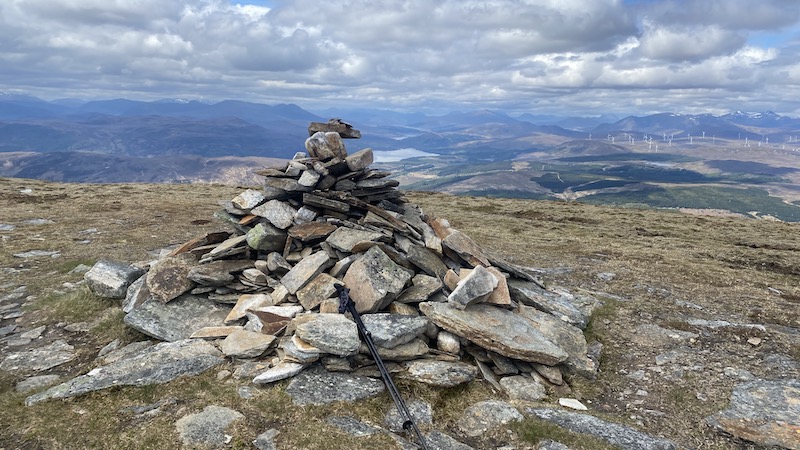 Little Wyvis is the Corbett sibling of the Munro Ben Wyvis. It is a great walk or run if you have a half day to spare. These mountains are now on my doorstep and I suspect they will become favourite outings for fitness – and for our visitors.

The most popular start point is the Ben Wyvis car park but I recommend you arrive early, or save the walk for a fine evening. The car park was full when I arrived with my friend David V and his wife Alicia. We were fortunate that Alicia planned to do her own walk to nearby waterfalls and she was able to drop David and I off.

Later, we discovered there are other start points further south and closer to Little Garve, if the main car park is full.

We had planned a circuit route, similar to this one on Walk Highlands, starting at finishing at Ben Wyvis car park. In the end, we made the decision to descend on wide tracks further south and then called Alicia so she could pick us. This route would only be possible with two vehicles or a pick up at the end.

The start of the route was familiar because it follows the same path as that for Ben Wyvis. I have run the route a few times before. The path is narrow and undulating, rising gradually alongside a burn.

We ignored the path north on the more popular Ben Wyvis route – it splits where a small cain marks the junction – and continued along the burn. The path becomes boggy and increasingly vague the further it ascends.

More ascending and then suddenly we could see the small cairn on Little Wyvis at 763m. The views were fantastic and wide ranging. It is possible to see Inverness and Dingwall with the Black Isle between. This is edged by the two firths of Cromarty and Beauly. To the west, mountains stretched out and out as far as the eye could see.

Little Wyvis descent – and a change of plan

We followed a descent path west, which zig-zagged quite steeply from the summit. The track was wide and very obvious and we laughed at the difference between the rugged route we had taken to reach the peak – and this obvious track.

Checking the map a little further on, we realised we had veered away from the suggested Walk Highlands route, which heads back to the Ben Wyvis car park.

Instead, we could see the wide track we were on descended back to the the main A835 roadside, but further south. We decided that if we could call Alicia, we would continue on the track and enjoy the straightforward run back to the road.

On reflection, the track to the west of Little Wyvis would make a much easier and more straightforward out-and-back route and avoiding the tramping over rugged heather and bog. It also avoids the busy Ben Wyvis car park.

Even so, we thoroughly enjoyed this Corbett. It is a fairly short but very rewarding run-hike and, in good weather, the views are brilliant. We also met no-one else, while Ben Wyvis looked to be busy with walkers.