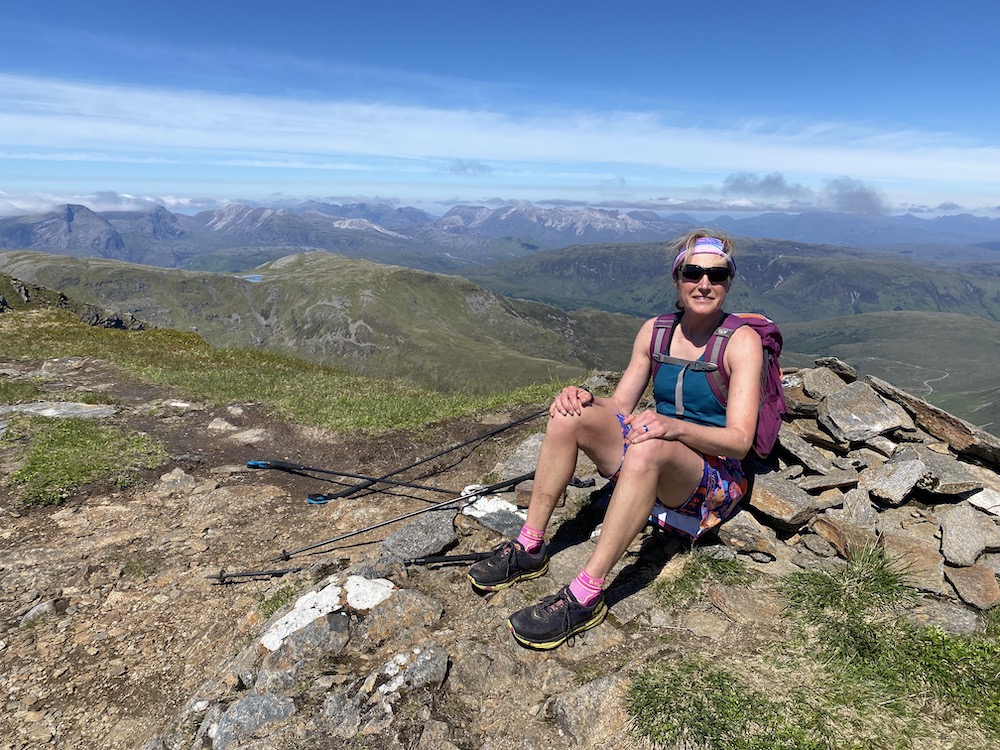 I can’t remember where the plan came from to join together two Munro walking routes into one but it has been on my mind for a long time. I expect it was Hubby G who first put forward the idea for a single outing to the Munros of Sgùrr Chòinnich, Sgùrr a’ Chaorachain and Maoile Lunndaidh.

Because the three Munros can be started from the same place and follow the same forest track for the first section, it does make sense – at least on paper –to tick them all off in one outing.

I’m also very pleased I had left these Munros until we moved to the Highlands. While staying near Glasgow makes many Scottish mountains accessible, the north-west Munros are far easier to reach if they are within an hour of your home.

We were able to make a more spontaneous decision than we might normally. In fact, it wasn’t until the Friday that we came up with the plan to go for the walk on the Monday.

A good weather window and a sense of optimism gave both of us extra motivation. I had only eight Munros left to finish a round and I have finally found the impetus to get on with them.

I’ve never felt in any rush to do all 282 Munros, yet with less than 10 on my mind, I have known for the past few months that they really need to be done!

Sunshine, stunning views and a big day out

G and I decided to mountain bike the first few miles of the route from Achnashellach in Strathcarron. There is a small forest car park just off the A890.

We planned to cover the same ground at the start of our route and while the ride was mostly all uphill on the way out, we knew we would very much enjoy the cycle downhill at the end of a long walk.

As we set off we were unsure if the lingering morning cloud would lift above the mountain summits, but it was only about 20 minutes into the ride when I knew we were going to be walking in very warm conditions all day. The light cloud floated away and the sky turned a fabulous bright blue.

We gained about 240m of height from Achnashellach to near Pollan Buidhe, where we left the bikes. This meant we began the walk section at 300m above sea level.

We could see a very obvious path climbing up the slope of the first Munro of Sgùrr Chòinnich. A short tramp over rough ground and along a river took us to an unusual wire bridge. This helped the river crossing, although it was also possible to cross using stones in the water. A spell of dry weather means the rivers were low.

From here we followed the well-made trail uphill. After a while the track petered out into a hill path but it was still very easy to follow. This path never really gave up its gradient, moving from relatively steep to really steep and then back to steep.

I knew from this point that the day was going to be a bit of a slog. I had enjoyed a full weekend of mountain walking and trail running so my legs felt rather jaded from the outset.

None of the mountains were easily won on this walk. It felt like the summit of the first Munro, Sgùrr Chòinnich, would never come. I usually find that when you start a big day in the mountains, you are always impatient for the first top.

By now the sun was very warm and we were both feeling the heat. We stopped where we could to fill our water bottles from fast-flowing streams. We also enjoyed the chance for short breathers and to take in the stunning views.

The glen and surrounding mountains offered a magnificent vista. Truly, we felt lucky to have taken the day off work to walk in this area.

The first Munro was the smallest of the day at 999m. Although there were tow more to go, I felt ridiculously happy to know I had only seven to walk for a full round.

The second Munro required a descent following a route above airy crags and then another steep push upwards. However, this mountain wasn’t far in distance and it seemed like we were on the second Munro of the day at 1053m in no time at all.

We rested here for lunch. I decided to ration my food a bit because I realised we had not packed enough food and snacks for a long walk. I have no idea why I under-estimated the food we would need but there was little we could do. We had just about enough but nothing spare, which always worries me because I hate being hungry when exercising.

Sgùrr a’ Chaorachain at 1053m provided fabulous views and I spent a while turning slowly around and taking in all the many mountain tops. It makes my heart sing to be amid such an incredible landscape.

We also chanced upon a couple of other walkers. One, like me, had only eight Munros to go to finish his first round. The other was steadfastly refusing to count the number of Munro summits he had reached. (Each to their own, I thought.)

G was enjoying the sun-bathing just a little too much and I had to cajole him onwards. Because he had walked these there Munros before he knew what was coming and I expect he wanted to put off the next section, which he told me would be something of a slog. I was keen to get on.

I also pointed out that his lack of sun lotion meant his bare legs and arms were burning. This was a huge mistake on his part because he ended up very red later in the day. Thankfully, he’d chosen a good sun hat for the walk so that protected his face and neck.

Having walked from Sgùrr a’ Chaorachain to Maoile Lunndaidh, I can see why people usually split these mountains into two outings.

There is a long descent that heads over rough ground and towards a large lochan. Fortunately, the ground was soft and mossy, rather than thick with heather.

Every so often, we picked up trods made by other people or animals. But these always faded out and we simply chose a route that we thought would be the most direct towards the distant base of Maoile Lunndaidh.

We hit a boggy section and tried to find higher ground to avoid getting wet feet. Brilliantly, we then spotted the traces of a more obvious path heading up the lower, steep western flanks of the Munro.

Yet, still, it seemed we had a long way to go even to reach this route. I tried to enjoy the flatter, easier going section of this part of the walk. I was only too aware that we would be starting a long climb to the final summit and my leg muscles were complaining.

The first part of the climb heads up steeply. We ascended more than 250m and then rounded on to a flatter section for a while. Then the climb went on and on.

Looking at the map, we knew we had several high points to reach before a long and gentle ascent to the summit proper. But even so, the knowledge didn’t help the sense off disappointment each time we reached a high point, only to see more mountain ahead of us! We were tired and very hot by now.

First came, Carn nam Fiaclan at 996m, then a slight descent before the walk to Maoile Lunndaidh at 1005m. Seeing the cairn on top of our third Munro of the day was hugely uplifting.

Again we rested for a while, surrounded by a fabulous landscape and under a hot sun.

A long descent and walk-bike to finish

Of course, as with so many Munro days, there was still a long way to go to reach the car. In fact, it turned out to be another 14km. Most of this was on foot and the main part of the descent was on mostly untracked ground.

We walked downhill with muscles complaining. A blister that had formed on G’s foot, burst and became painful. Our sights were on Glenuaig Lodge – and frustratingly it didn’t seem to grow much closer. Once at the lodge, where there is also a small mountain shelter, we knew we would join a flatter track through the glen.

Thankfully, despite being fatigued, we remembered to take the time to look around us. The glen is truly magnificent and a place to relish on a clear and warm day.

We walked most of the last few kilometres along the wide track to regain our bikes in comfortable silence. G and I are good at chatting – and also at being quiet together.

Half-way along, we stoped to share a final two pieces of Scottish tablet. I had been saving these for the final section and they really helped with our energy.

Then, at last, we could se the small hillock behind which we had placed our bikes. A quick swap to bike shoes (and bike shorts for me) and we were off.

It felt so wonderful to be able to take the strain away from walking muscles to pedal downhill. The track isn’t all downhill but the vast majority is and we were back at Achnashellach in what seemed to be no time at all.

In total the bike and walk of 32.55km took a moving time of 5 hours 35 minutes but there was plenty of resting and sitting about in there, too. Total elevation gain was 1,787m.

Another option: If you fancy an even bigger day out see Steven Fallon’s epic route, for example.