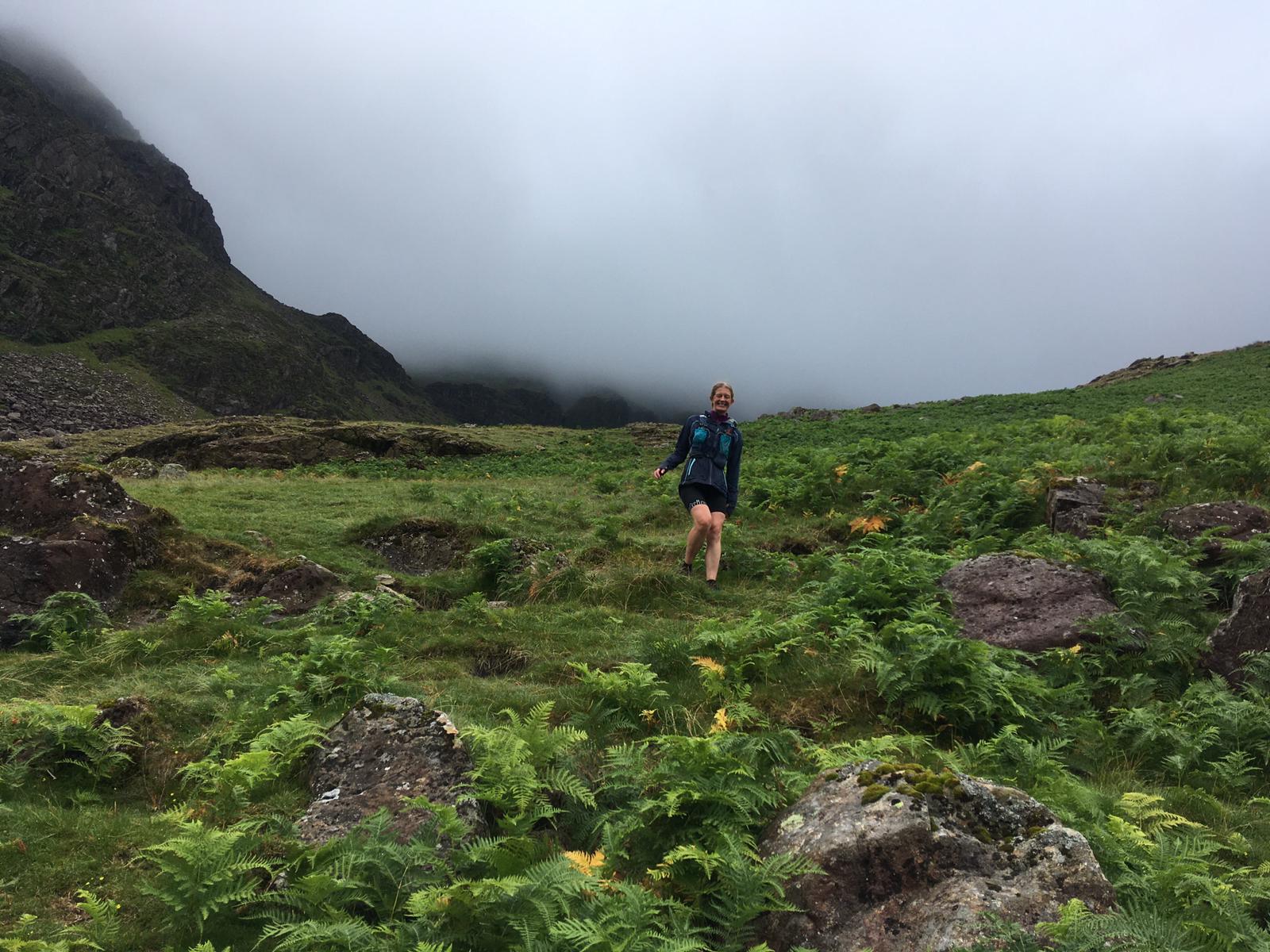 Elizabeth Adams has become only the 113th person to complete a Frog Graham Round.

A Frog Graham is described as the UK’s ultimate SwimRun challenge. It is a run of more than 40 miles in total, with some 15,750ft of ascent, in the north-western fells of the Lake District.

The Frog Graham, like its namesake, the Bob Graham Round, starts and finishes at Moot Hall in Keswick.

It was created by Peter Hayes. See Frog Graham Round for more information.

Why a Frog Graham Round?

Elizabeth has taken part in many endurance events over the years but they usually involve a bike. She says: “My normal adventure is riding for days on end, eating cake and pizza and sleeping.

“Then, a few years ago, a friend suggested that I should challenge myself and do a swim-run event. I laughed it off because those are basically the horrible bits of triathlon, which I’m not very good at. But clearly the idea of a challenge stuck with me.”

Elizabeth moved to Cumbria at the start of lockdown to live with her partner Alan. She says she was lucky to meet a group of people who were going to try to swim through the winter for the first time. At the same time, she started doing more fell running.

She says: “These friends that I made kept me sane during the dark winter lockdown months with icy early morning swims under Skiddaw and evening fell runs.

“I missed my biking buddies and local trails from Glasgow, but I decided that instead of getting frustrated because I couldn’t find these same things here, I had to embrace the amazing things my new playground was offering.

“Then I remembered that challenge thrown down from a few years ago, so I decided to do the Frog Graham Round. I truck it’s a proper challenge and one which showcases the most amazing bits of West Cumbria.”

Elizabeth chose late July for the Frog Graham. Alan and friends Elspeth, Tamsin, Linzi, Emma, Laura and Maisie gave support, such as kayaking or paddleboarding on her swim legs, or swimming or running alongside her.

Elizabeth tells her story: “Like any difficult challenge, the day had its highs and lows.

“Starting in Keswick at 5.30am, the first run legs and the swim across Bass Lake were all great. Claggy weather on the tops made navigation a bit more challenging than usual but with only a tiny route-finding error, I was just enjoying being out in the hills with friends and I was buzzing when I reached Crummock.

“I could see another Frog Graham group swimming ahead but I was reasonably happy with just stripping off and getting into the water on my own.

“I hadn’t worn a wetsuit in Bassenthwaite and wasn’t planning to wear one for any of the swims, just going in in my shorts, bra and trainers instead. It just felt simpler and I hadn’t been wearing a suit for a few weeks in these lakes. I put my backpack in a dry bag which I towed across.

“The Crummock swim is pretty short but somehow this one seemed as long as all the swims put together. I think it must have been the headwind but the people on the other side of the lake just never seemed to get any closer.

“By the time I got across I was feeling pretty cold. In triathlons, you’re told to kick your legs hard to get the blood circulating and avoid feeling dizzy when you exit the swim. So that’s what I did, except that the second I did it my hip flexor went into cramp.

“Getting out the swim I couldn’t stand up straight or lift my leg up over the rocks. It was so painful. I knew I had to get moving again. My body temperature continues to drop quite drastically when I get out the water.

“I really am the hypothermia girl and it was quite windy and cold but with the cramp I just couldn’t make that happen.

“I went from buzzing and having a brilliant time to alternate violent shivers and moaning in pain. The people having picnics on the shore must have wondered what I was doing with all my clothes on and hood up, dragging myself across the rocks.

“When I’d reccied the next section up Melbreak, I decided it was too overgrown to be faster the steep way, and I’d rather walk around a bit to join the big path up and back.

“Given the condition I was in, that was definitely the best plan as it took ages for my hip flexor to get back working. I don’t think I would have got up the steep bit.

“Going up red pike was tough mentally, with low visibility and it was starting to rain. I’m sure it’s a really pretty walk when you can see things but it just seemed to take forever and I was worried about cramping in the Buttermere swim on my own, or just being really cold and having to go back up into cold, wet fells on the other side.

“By that point I didn’t even think I’d make it to the Derwent swim but knew that I was taking so long on this bit, and with the cloudy weather making it darker, it was likely to be a dark and cold swim.

“When I reached Buttermere, I told Alan that I was going to do this last swim and then pull out. I set off into some choppy water and I’m not sure what changed – maybe a tailwind – but I suddenly felt much better and actually started enjoying it again.

“Elspeth and her husband Tom had been slightly freezing on the beach waiting for me but they had been entertained by witnessing a proposal on the beach I was due to be swimming from just after.

“As I drank my coke and ate crisps, Elspeth read out lots of messages of support from whatsapp and I forgot what I’d said about pulling out, as we set off up Robinson.

“Poor Alan had kept watch until I made it half-way in the water then belted round the lake, despite having already run most of a hilly marathon supporting me, ready to console me as I pulled out…only to find the beach empty and then Tom standing there with empty crisp bags and coke bottle for him.

“Somehow the climb up Robinson wasn’t as long as I remembered and we got over the next few fells with only a couple of minor errors due to the clag. We were finally rewarded with a view at Dalehead tarn. This was Elspeth’s first running trip to the lakes so it was nice to actually point out the stunning hills she’d been up earlier in the day.

“I got down to the shore under Catbells just as it was starting to get dark. I was really happy to have Laura with me on the paddleboard with her light and glowstick, while I had a glowstick of my own in my bag and on my goggles so she could keep an eye on me.

“I put on a wetsuit for that swim as doing it without just felt all a bit too daunting after the cold in Crummock. The water temperature in the lakes had really fallen with a bit of rain.

“I’d hoped to be doing this swim in daylight but the wet rocks coming down high stile had made it much slower going, along with the trickier nav – and I think I was just slow on that middle bit because it was a bit grim and miserable.

“I managed to get to the first two islands in Derwent while there was still a bit of dim light  – surprising someone tucked up in their hammock on one of them – and getting up out of the water definitely made the swims feel much shorter.

“Eventually, we reached the other shore to find my buddies for a stagger – still half wearing my wetsuit, with occasional bursts of slightly wobbly running – back to the Moot Hall to get an enormous cheer from people enjoying a Saturday night drink.”

After the Frog Graham, Elizabeth reflected: “There is no doubt about it, it was a massive day out. And the lake swims aren’t to be taken lightly.

“I have a lot of respect for the fells and the lakes. I feel really proud and surprised I’ve managed to do it at all and this was an amazing way to celebrate my new home in West Cumbria.”