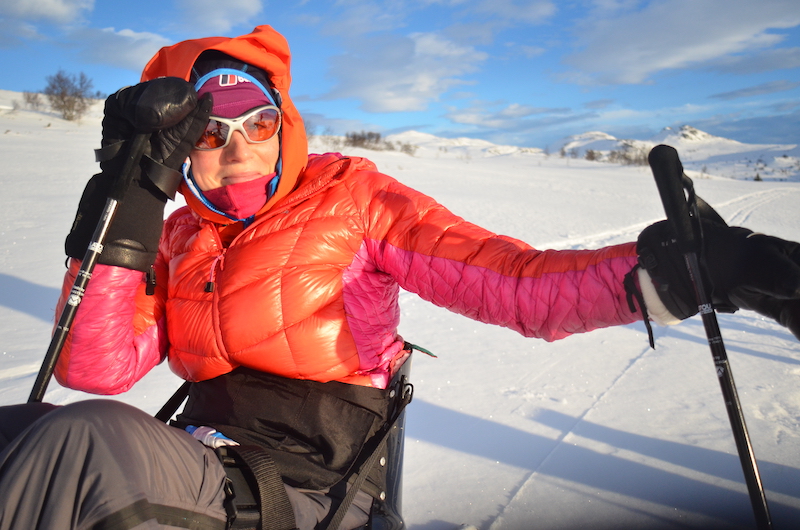 I interviewed Karen Darke about her latest mission, The Pole of Possibility. The article was published in The Scots Magazine. If you enjoyed reading this article, why not buy a Scots Magazine, or a subscription?

If successful in her latest mission, adventurer Karen Darke will achieve two world firsts, yet this is not what motivates her.

Rather, The Pole of Possibility, which is a two-week Antarctic ski journey, offers a new opportunity for the Scottish Highlands-based athlete to inspire in others what she believes are the advantages of adversity.

Karen, who is paralysed from the chest-down after a climbing accident aged 21, is aiming to propel herself 155 miles to the South Pole by her arms only. It will be the first time a female has sit-skied to the South Pole, as well as a world record for the furthest distance travelled to the pole by sit-ski.

The challenge early next year is 50-year-old Karen’s ninth – and final – expedition in an ambitious project, Quest 79, which she launched after winning a hand-biking gold medal at the Rio 2016 Paralympic Games. She had previously taken silver in the London 2012 Paralympics.

Karen, who lives in Inverness, explains: “After an exciting year of sport in 2016, topped by my win, I felt suddenly burned out and emotionally flat. I needed something to give me new meaning and purpose.

“It turned out that my medal was the 79th British medal of the games and I already knew that 79 was the number for gold in the periodic table, so I decided to build on the gold theme to give myself a goal and also to inspire other people.

“More important than winning a gold medal, it seemed to me, is our ‘inner gold’. I believe we find inner gold when adversity pushes us out of our comfort zones. What happens is that we discover what is possible and find new perspectives and solutions through the power of thought, clear intention and when good people come together.”

Another Quest 79 goal was to compete in the 2020 Tokyo Paralympic Games, which took place in 2021.

Karen, who was born in Yorkshire, moved to Scotland to study for doctorate in geology at the University of Aberdeen in the early 1990s. It was while climbing on sea cliffs in Aberdeenshire that she fell 30ft and broke her back. She was told she would never walk, cycle or climb again.

In a book, If You Fall, that she she wrote in 2006, Karen says: “I always thought I’d rather be dead than paralysed… one slip, one moment and everything changes…”

But she also proves that disability is not a barrier to achieving the seemingly impossible for her.

Although she struggled with regaining independence and fitness, her determination and ability to adapt, as well as the support of others, allowed her to combine wheels – and kayak and skis – with the wilderness she craved.

After six months of recovery in a hospital bed, she bought a racing wheelchair. A year later, she completed the 13-mile Great North Run followed by the 26.2-mile London Marathon.

In 1996, she hand-biked across the Himalaya from Kazakhstan to Pakistan, followed by further cycling trips in the Indian Himalaya in 2005 and 2018 and another across the Tibetan Plateau in 2014.

In 2002, she was part of a team that sea kayaked through the Inside Passage from Canada to Alaska. In 2006, she took part in a ski expedition that crossed Greenland’s icecap. Sixteen years after her accident, Karen climbed the iconic overhanging rock-face of El Capitan in Yosemite, California.

Her experiences led to an MBE in the 2017 New Year Honours List for services to sport and this year she was named the winner of the 2022 Scottish Award for Excellence in Mountain Culture by The Fort William Mountain Festival. She has also written two more inspirational books, Boundless and Quest 79: Find Your Inner Gold.

She says: “The mountains, scenery and nature have always felt like the fabric of my being. Since the accident, the outdoors has been my salvation in every respect. It gives me so much, both physically and mentally.

“Also, the adventures and challenges that I have been able to do allow me to show other people the power of what is possible. Just like my latest South Pole trip. It’s a chance to inspire others.”

Karen will be joined in Antarctica, on her seventh continent, by 21-year-old Scot Iona Somerville, who is a graduate of The Polar Academy. The Scottish charity works to build teenagers crushed by a lack of self-esteem and confidence into leaders and role models.

While Iona will travel on traditional skis, until this year she had skied only once before.  Karen is acutely aware of the potential pitfalls following a training camp in Norway with her adventure partner.

She says: “There are some obvious challenges for me because I am paralysed, such as monitoring and managing my body temperature and poor circulation in very cold and windy conditions and also coping with other personal hygiene needs.

“In addition, there’s the design of my sit-ski, which can all too easily fall over to the side leaving me unable to right it myself and then there’s the issue of pulling a heavy pulk [sled] full of all the kit and food we’ll need for the trip on unpredictable terrain.

“But further difficulties are more to do with skills. When I’ve skied before it has been with a team of expert skiers and they were able to support me in ways I don’t think I had fully appreciated. For both Iona and me, there are the new demands because she is a novice skier.

“But, actually, this only adds to the attraction of the trip because it is pushing us to find new ways to succeed and to overcome the unexpected.

“To me, and hopefully those who are inspired, it’s another opportunity to find inner gold through challenge.”