Should cyclists be allowed to ride on pavements?

I try not to cycle on the pavements. To be honest, I’ve never found the activity to be very satisfactory because of the continual need to wind in and out of pedestrians, bins, bus stops and dogs, as well as going up and down kerbs. Occasionally I’ve ridden a pavement, mainly when I’ve forgotten my bike lights and the light is dimming and I know I’ll be a danger on the roads. (Yes, I could walk instead of cycle in this situation but a) I usually need to be somewhere on time b) Have you tried walking in clip-on pedal shoes?!) I know, too, that cycling on the pavement is actually illegal! 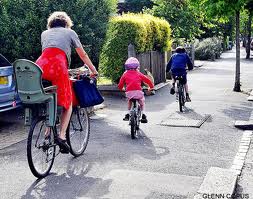 In fact, my view on pavement cycling extends further. I don’t like to see cyclists trying to dodge traffic lights, car queues and various road obstacles by bumping up on to the pavement. I think it gives cyclists a bad name and since bikes are pretty quiet it poses quite a danger for pedestrians. I’ve seen too many cyclists riding recklessly on pavements.

Cycling on pavements, in my opinion should be reserved for very young children. That is, unless there is a proper cycle lane marked out on a nice, extra wide pavement.

Now I hear that Edinburgh City Council is currently considering a plan to let pedestrians and cyclists share footways. As part of its campaign to increase cycling across the capital, the council hopes to begin statutory procedures to permit bikes on sections of the pavement on the A8 Glasgow Road and at Granton.

Apparently, this initiative is part of a project to create a continuous off-road cycle route from South Gyle to Newbridge, and is part of Edinburgh’s “family network” of bike routes.

Cycling will be allowed on extra sections of the footway to improve cycle access to Telford College and to link up with new cycle routes expected with development at Granton.

Various pro-cycling folks are supporting this brave move. Gary Bell, a spokesman for the Better Way to Work campaign, which encourages commuters to take travel by bike, is reported in the Scotsman as saying: “Just as there are inconsiderate drivers who talk on their mobiles and flout red lights, there are some bad cyclists who cycle on pavements. The focus should be on responsible cycling and there are areas of the city where cyclists and pedestrians manage along together just fine.

“There is a perception that roads are dangerous for cyclists, so the opportunity to cycle off-road is ideal. But as people get more confidence, hopefully they will accept the challenge and cycle on the roads as well.”

I can see that cycling “off-road” is a safer option (although I do think that the more people who ride on the roads, the higher the chance of acceptance by other road users.. But that’s a whole other issue.) If we can encourage more people to cycle by creating more traffic-free pathways then it gets my vote. Cycling is healthy and good for the environment.

But what about the walkers?

But I would prefer to see money being spent on creating cycle-specific lanes. These can run parallel to footpaths but I think that for the safety of everyone, cyclists and walkers need to be get apart.  I’m hoping that the new sections of footway in Edinburgh being proposed for dual walking and cycling use will be wide enough to accommodate both cyclists and pedestrians, and, if not, will be widened. The problem is, in my experience, that even where pavements are widened pedestrians still stray into the cycling “lane”, and cyclists also ride in the walking “lane”.

There needs to be some kind of dividing barrier between walkers and cyclists in dual lanes to encourage both to stay on their side of the pathway. The is especially important where pedestrians might by walking their dogs. It’s not possible to count the number of times I’ve nearly come off my bike in a Glasgow park because of an unruly dog, even dogs on leads.

My recent experience of cycling on new Sustrans cycle ways from Oban (read a blog I posted on Regatta website) only adds to my dreams of a day when it will be possible for cyclists to ride all over Scotland on safe, traffic and pedestrian (and dog) free paths. Keep at it Sustrans!

What do you think about plans to allow cyclists to ride on certain pavements in Edinburgh?