The good news is I have raised £660 for the charity, Breakthrough Breast Cancer, by taking part in the London Triathlon 2011. The bad news is I almost never made it.

The good news is that I made it through the much-dreaded open water swim in Victoria Docklands. The bad news is I almost sat down and cried during the torturous run.

The good news is I loved the cycling section of the triathlon. The bad news is my legs ache so much today that I can hardly force myself to walk Wispa the Wonder Whippet!

Here’s how the event was for me: 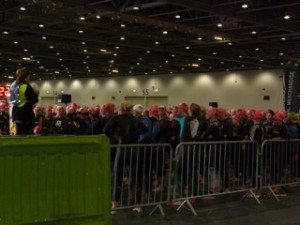 I almost never made it to the start line because of a nightmare drive from the hotel (actually only 4 miles to the event location at the Excel centre) but because of road closures (for the cyclists) and a total lack of alternative signing and our (the G-Force was there supporting me by driving me about all weekend) complete lack of knowledge of London roads, and a Sat Nav that refused to find an alternative route, we ended up south of the river (the event was north) and having to take a drive-on ferry (the only one of the day was 11.30, delayed to 11.45) to reach the Excel centre just 25 mins before the start of my heat. I still had to sort my kit in the transition area and put on my wetsuit and calm down in time for the race briefing. There were tears, retribution, and much gnashing of teeth. 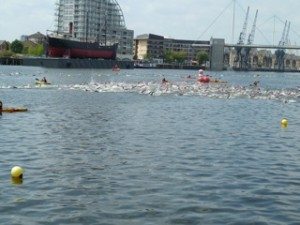 Swimming 1500m in Victoria Docklands, aka the River Thames

The 1.5km open water swim actually went better than I’d expected. As most people who read this blog will know I’ve been dreading the open water swim. The notes for the race also told us to try not to swallow any of the water in Victoria Docklands. I’d been worried about so many other swimmers around me (some 400 started in the swim) and being bashed about. But when the klaxon went I just got on with the swim. I got into a comfortable pace and just kept on swimming. It seemed like a very, very long way and at one point I made an error of judgement about how far the next marker buoy was (we were actually heading for a buoy far further away!) but overall I was quite happy with the way I coped with the swim. 30 mins for 1500 metres of zig zagging along the Thames!

Transition 1 could have gone better. I was doing so well. I’d pulled off the wetsuit, found my bike, pulled on socks and bike shoes, fixed on my helmet, put on my sun glasses and I was heading for the bike exit when a marshall called me back and told me I’d forgotten my race belt and race number. Aaargh. Too much time wasted going back for the race belt. 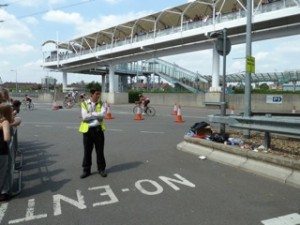 One lap of the bike section completed... 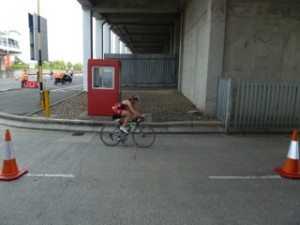 Just a steep ramp to go to complete the cycle section

The bike section was fab. I like cycling, especially on my lovely, shiny Giant racer bike. It is so smooth and after a summer holiday cycling in the Pyrenees, as well as all those training bike sessions, my legs felt great. The 40kms included a few more undulations (up and down fly-overs!) than I’d planned for but I felt comfortable for the whole ride. I passed lots of people and felt as though I was making great progress. Perhaps I could have cycled a bit slower (and then the run might have been better?!) but I didn’t feel like I was over-taxing my leg muscles and so I just kept on going. I finished this section fairly high up the field and in 1hr 5 mins. 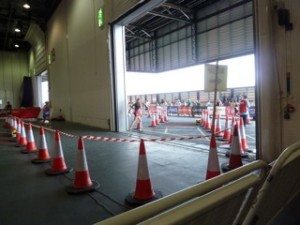 Too many running laps to cope with!

The run was utter torture. After a quick-ish transition 2 (swapping bike shoes for run shoes) I headed out on to the run section. Four laps along the docklands and with the benefit of lots of people cheering us on. I was wearing my Glasgow tri club trisuit so people kept cheering: “Come on Glasgow.” The problem was that “Glasgow” couldn’t get her legs to go any faster than the pace of an arthritic 90-year-old. I kept hoping that after one lap I’d “get my legs back” but they just felt worse. I have never stopped to walk in an event but I had to walk twice during this section of the triathlon. It was so, so hot and my legs felt so, so useless. I knew I was being overtaken by lots of other women and that I was running the worst 10k time of my life but there was nothing I could do to make my legs turn over faster. I felt like stopping, sitting down and crying but I just kept on trying to push through the dispiriting pain. As I expected, after seeing the results, I did a “bad for me” time of 52 mins.

But I finished. I completed the whole race in 2hrs 35 minutes. I actually came 8th in my age group (40 to 44). I was in the top 10% of all age group female competitors (more than 660 in total) so despite a poor run it seems the swim and the bike sections were better than I could have hoped for.

I raised £660 for charity and I’ve learned a lot from this, my first ever Olympic distance triathlon. I think that I would need to do several more triathlons at this distance to really understand how to pace myself. Or how to better manage my nutrition and water intake. Or maybe I should try a triathlon in cooler conditions?

I did it! I was knackered but delighted to have finished my first Olympic distance triathlon

I have a lot of praise for my coach, the Mighty Vickster, who has brilliantly guided me towards being able to achieve a good result overall and giving me the confidence to get to the start line.

Will I do another Olympic distance triathlon? Just now, the answer is no. The torture of the run is still clear in my head! But who knows?!

If anyone would like to raise funds for the same charity, Breakthrough Breast Cancer, please check out their new Perthshire Trek 2011 on September 9/10.