Fabulous cycling in the French Alps

It was at 3km from the top of the infamous Tour de France col of Galibier that I suddenly realised that the only bit of me that wasn’t feeling the pain of the cycling was my nose. And even that part of me was annoying me with streaming  snot. Glancing at the 3km marker sign, which revealed yet another gruelling 1km of average 8% incline, I growled to myself and dug deep within my psyche to keep on pushing my pedals around. To be honest, if I’d tried to stop I would have fallen off my bike because the pressure being exerted on every turn of the pedals was so intense that it was unlikely that I could have been able to unclip before the bike fell on its side with me crushed underneath. Believe me, I’d thought about all of these possible factors during every single one of the previous 18kms, from the start of the Col du Galibier. 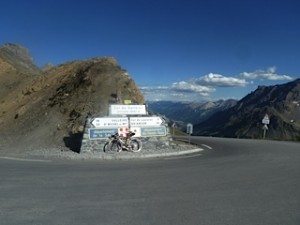 So there I was, still just managing to turn the wheels at a painfully slow speed, and finding that everything hurt. My leg muscles, my butt, my undercarriage, my arms, back, shoulders, the bottom of my feet, my toes and my hands and fingers. They all ached or rubbed in their own crappy way. Even my forehead hurt from the force of etched concentration, as did my jaw. My lips were dry and my throat was sore. The roll call of pain only excluded my nose, and, as I said before, that was streaming because of the sunscreen that had dripped into my eyes from my sweating forehead.

So why didn’t I just call it a day? Turn my bike around and zoom back down the hill at a glorious speed? Well, there were two reasons:

a)    Going back down the hill would also mean retracing my cycling route of more than 100kms back to the campsite close to Bourg D’Oisans in the French Alps.

b)    I am the kind of determined person who likes to finish what I’ve started.

At the top of the Alpe d’Huez

And so I plodded painfully on. But how agonisingly long those last few kms felt. With 2km to go I thought I might collapse and even with just 1km more to cycle to reach the 2645m top I needed to grit my teeth hard and talk fiercely to myself to persuade my legs to keep turning. In fact that final 1km was possibly the steepest of the entire cycling day. It felt almost vertical as I huffed and puffed and bullied myself upwards.

And then it was over! How quickly the relief flooded through my body and how fast the smile spread across my face. Reaching the top of the Col du Galibier felt good. Really good! 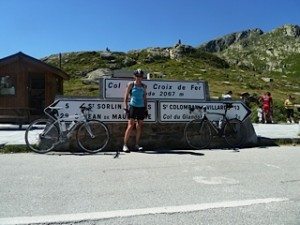 I make it to the top of Col Croix der Fer

The facts about the Col du Galibier

The Galibier is often the highest point of the entire Tour de France route. From the north, the climbing starts at Saint-Michel-de-Maurienne and also takes in another mountain pass, the Col du Télégraphe. The total ascent of the Telegraphe and Galibier is 34.8km, gaining 2120m in height at an average of 6.1%. The climb on Galibier to the summit starts at Valloire and is 18.1 km long at an average of 6.9%, with a height gain of 1245m. The maximum gradient is 10.1% at the summit.

If you don’t know what this means in cycling terms I can sum it up in a few words: Muscle pain, sweat and tortured thoughts. If you’ll recall, I have also cycled many of the cols in the Pyrenees and I don’t think that any of them match the ascent of the Telegraphe and Galibier combined.

But, still, I was on holiday and cycling cols over dozens of miles is meant to be my idea of fun!

A girlie cycling holiday to the French Alps

That day ascending the Galibier has begun as a bit of a challenge. On holiday with five girls – four from the Glasgow Triathlon Club and one from Canada – we had decided to ease ourselves into a week of French Alpine cycling with a 100km “training” day – that also included the Col d’Ornon (almost 1500m) – and then, the next day, an ascent of the famous 21 hairpins of the Alpe D’Huez. For Day 3, we decided to go for a biggie.

When I spotted a route in a bike guide of 174km, via four big cols, we all jumped at the chance to give it a go. (Clearly, you’re thinking, we’re a little mad. And I’m inclined to agree!) The Marmotte route starts from Bourg-d’Oisans, takes in Col de la Croix de Fer (at more than 2000m), plus the Telegraphe and Galibier and is rounded off by a 13km climb of the Alpe d’Huez. The total ascent is 5000m and the route is rated at plus difficile! I can tell you that plus difficile is an understatement – and we didn’t even have enough daylight to do the Alpe!

In total we cycled 160km and more than 4000m of ascent. If I felt almost broken at the top of Galibier it was only after the high-speed descent and then more seemingly endless kilometres back to Bourg that I actually did feel totally broken. The next day I could hardly cycle at all and it took all my effort to take in a short stroll and a little yoga!

But the ride was so, so worth the effort… and the pain. In the end it was myself, Canadian Heather and Turbo-charged Hannah Bananas that completed the 160kms. The others broke the route into two days by hiring a car after the first col (sensible ladies!).

Superb views – and look at that road!

The views going up, over, along, down and around the route are impossible to describe without sounding like I’ve put “gorgeous” into the on-line Thesaurus. But all these words do pop into you’re mind as you pedal along:  Stunning, wowy, beautiful, incredible, impressive, fabulous, picturesque, breath-taking… And more. While there are times when the pain (see above) is almost unbearable, for the most part, cycling in this area in the French Alps is akin to being submersed in your own gloriously scenic kaleidoscope.

But didn’t we miss our cycling boys?

We could have invited a few cycling guys to come with us on our holiday. And we’re very sure they would have loved the trip. But being on a girl-only holiday actually suited us all really well. There was a lot less testosterone and we enjoyed time off the bike at an outdoor swimming pool, chilling out over meals prepared in the self-catering chalet at Les Sables, near Bourg d’Oisans and chatting. Without the men around we had masses and masses of time for girlie chat. It wasn’t necessarily a better holiday because we were all girls, but it was equally as good as any cycling trips I’ve been on before.

Where to stay during a French Alps cycle trip

Cleverly chosen and booked by Animal Magic (who unfortunately felt under the weather with a cold for half the holiday), we stayed at Ferme Noemie, at Les Sables, just a couple of mils from Bourg d’Oisans and the foot of the Alpe d’Huez. While the five girls shared a mid-terraced two-bedroom chalet, I camped in my own wee tent just a minute’s walk away on the campsite.  I would highly recommend Ferme Noemie. The English owners are very friendly and super knowledgeable. The chalets and campsite, plus all the facilities, are clean and modern. The location is brilliant. (It is ideal for both cycling and skiing.) Many holidaymakers appeared to be return customers, which always says a great deal about the standard of accommodation and service on offer. 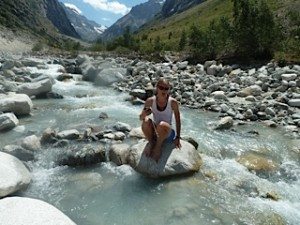 Turbo chills like a, er, lizard or a frog?

Where else did we cycle during our trip?

There are more than enough cycling routes to suit all kinds of road and mountain bikers for a week or more. We mostly referred to the “30 Cycle Itineraries” found in a guide from the Tourism Office. On day five, Turbo and I headed off for a truly stunning (see all descriptive words above and add “truly” to them!) out-and-back valley route via the Parc National to la Berarde. The route included some 1000m of ascent but the views of the tumbling bluey-white river in this valley had us oohing and aaahing so much that we almost forgot the muscle pain! It was fantastic being able to cool off in the freezing water of the river at the half-way point at Berarde. The waters come from melting glaciers another 1000ms or more above out head sin the high, high mountains. 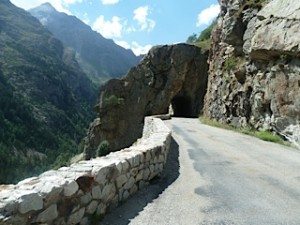 Our final cycle outing was meant to be “leisurely” but ended up being a race up Alpe d’Huez (both Turbo and I beat our first attempt times on this hairpin-crazy mountain), a muscle pummelling ride to the top of another mountain pass, the Col Du Sarenne, before an even more muscle punishing 20kms or so following another undulating road high above the Ferrand and Romanche valleys. Again, this route is gobsmackingly gorgeous but also a tad tiring. 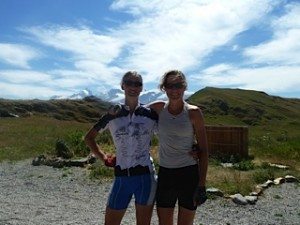 Turbo charged Hannah Bananas and me

Turbo and I agreed that we had had our fill of cycling over the week – but we would love to return for more when we’ve properly recovered (possible sometime in the next decade!).