I did it! I climbed Curved Ridge!

As the G-Force recovered from his “terrifying” 40m Titan Crane Bungee Jump at the weekend, his first words were almost a mirror of my own after I completed the Curved Ridge of the Buchaille Etive Mor, in Glencoe. “I’m not entirely sure I’d recommend that,” he said with a shocked grin on his face. Just minutes later, however, and the brave – or bonkers? – G-Force confessed that although it was stupidly scary standing on the 60m high ledge of the Clydebank crane, near Glasgow, he might want to do it again “just to see if I enjoy the sensation of rushing through the air and feeling as though I might die”.

On the other hand I will not be doing Curved Ridge again! Well, not in the foreseeable future anyway. 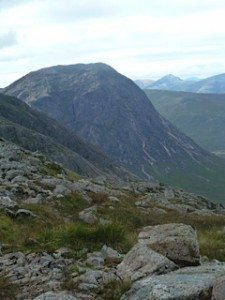 Climbing this ridge has long been on my “could I do that?” list. But I’ve never felt comfortable with heights and I’d been told the ridge was pretty exposed.

Over the past few years I’ve experienced – and coped with – many ridgey and fairly exposed sections of mountains while climbing more than 100 Munros. I have scrambled over tricky sections and learned how to deal with my own fears. I just don’t look down, always ahead, forwards or at the horizon. This has worked for me. I’ve also been fortunate to walk most of these Munros with the G-Force, who is very, very good at helping me to deal with difficult mountain situations. He somehow manages to calm me and instill me with confidence.

So, last weekend, when we found ourselves in Glencoe in glorious autumn weather, the G-Force suggested we try Curved Ridge. He’d always wanted me to do this route and I thought it would be a good challenge. My mind was made up by Smiler Sarah and When-I-Lived-In-New-Zealand Dave. They had come up to Scotland from Scarborough to enjoy one of our Munro bagging weekends and they were very keen to do Curved Ridge. The day before we’d completed some scrambley sections without too much hassle on the Ballachulish Horseshoe.

Curved Ridge is one of the best-known climbs in Glencoe and most people will have looked on in awe at the steep ridge while sitting comfortably in their car driving the main road of Glencoe. It’s a grade two/three scramble in summer. The climbing itself isn’t technical. The hand and feet holds are mostly large and easy to find and there is little to test your climbing ability. But it’s the feeling of exposure that changes how most people cope with this climb. 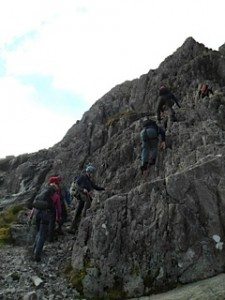 The walk into the base of the ridge gives little clue to the actual climb. Every time I looked up the view of the ridge seemed to have morphed into something else and so it wasn’t until I was actually climbing that I could understand how the route fitted together.

The first steep rise of Curved Ridge has a horrible deep gully to its right. The G-Force decided that although this is an easy grade 2 climb, he would rope us up to make us feel more confident. I think I could have climbed this section un-roped by I respect G’s decision. This ridge is a lot about mind games and it helped to be belayed by rope and harness. As Smiler and I sat there being sorted into our harnesses by When-I-Lived-in-NZ, the G-Force nimbly climbed to a high point and made an anchor. Meanwhile, two happy mountain goat girlies passed us headed for the frightening looking steep rise of Rannoch Wall on the other side of the gully. It made me feel sick to the core of my stomach just to see them climbing up that route!

Once we’d all climbed up to where the G-Force sat, the route eased a bit and we climbed onwards unroped. There were some trickier sections but nothing that challenged my climbing ability, even while wearing winter hiking boots. To be honest, the ridge is narrow and so there is little you can do than follow the line of all other climbers.

At the next steep section, the G-Force again decided to use ropes. I managed the climb but my nerve was definitely going. And then again we reached an easier climb and I relaxed again. Then, up ahead, I suddenly glimpsed a significantly steeper rise in the ridge, with a deep gully/chimney to its right. This, apparently, is the crux of the route (grade 3) and until I could properly see this section I had no idea it even existed. There was no way down and so I knew I was going to have to get on with it. 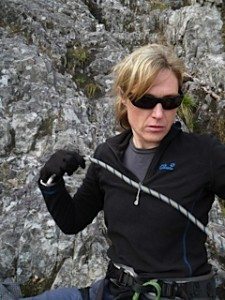 But by now my mind was making me feel nervous and pretty ill. I had glanced out and down about half way up the route and the drop was horrible. It made my stomach lurch and my palms sweat. From then on I’d been unable to look down again. Every time I stopped to wait for the others to climb up I’d only been able to stare at the rock face in front of me. I was feeling properly scared and I just kept saying to myself: “Let’s get this over with.”

I didn’t cry but I felt close to tears when I saw that chimney up ahead. Panic surged through me and I couldn’t believe I’d agreed to do this route when I hate heights. “Just look up. Just keep going. You can do this,” I told myself. But my legs trembled and my mind screamed: “Scared!”.

We roped up again for the chimney section. You need to take the climb head on and avoid going into the gully but there were lots of good holds. As I said, the climbing itself is easy enough and if the chimney was at ground level I’d have mountain goated up it without ropes but it’s the height that messes with your head. It is so, so far down and I felt as scared as I’ve ever been on a mountain. But I got on with it. I could hear the encouraging words of the G-Force up ahead and there were other climbers al around just doing their thing. What else could I have done really?

Further below Smiler was having her own confidence difficulties but David’s patience guidance helped her up the route, too. Every time we met up on the ridge, Smiler and I talked of huge fear but of how thrilled we’d be to reach the top. The G-Force kept saying how proud he was of me. 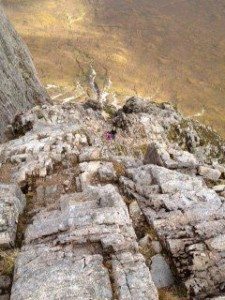 The final section of the ridge should have felt much easier but I was tired and feeling very exposed. I gave myself a talking to and just kept walking, scrambling and climbing up. There are still some bits that have sudden drops and I couldn’t get the feeling of exposure out of my head.

Near the top there’s a choice of an easy walk-off up a grassy gully to the top of Curved ridge or more of a scramble on a narrow path going right towards the col between the top of Rannoch Wall and the North Buttress. For some reason we went right! This scrambling was some of the easiest of the route but I still felt scared! My mind and body very much needed to feel safe on the summit and 10 minutes later that is where I found myself. 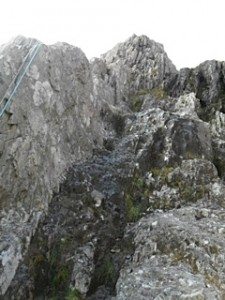 I was relieved – but I didn’t really feel much else. The G-Force followed up behind me, having checked that Smiler and When-I-Lived-in-NZ were ok. He was thrilled with what I’d achieved but I just felt numb. All around me were other climbers smiling and chatting but I just stayed silent. Maybe it was exhaustion after the adrenaline charged climb? I’ve no idea. But all I wanted to do was walk back down to ground level.

The descent on Buchaille Etive Mor

The tourist trail path  is almost the opposite extreme of the Ridge. It’s an easy route that winds down the mountainside. I kept wondering why I’d not opted to walk this path while the others did the Ridge. But then I realised that I wouldn’t have pushed my limits at all. I started to feel pleased with what I’d achieved. I’d climbed Curved Ridge. I never thought I could do that – but I had. And that’s when I began to enjoy the day properly! There is little to beat the sense of achievement that comes with overcoming fear and a huge challenge. I climbed Curved Ridge. I really did!

The G-Force deals with his own terror

And on our return to Glasgow, it was the G-Force’s turn to feel very afraid. I’d been invited to bungee jump from the Titan Crane but I said no. For obvious reasons! The G-Force said he would do this instead. He said that he felt fine about it until he stood on the edge – and then tried to think of every reason why he shouldn’t do it. See the video of his Titan Crane bungee jump. Although I was scared for him, it was actually pretty funny to hear his terror after all that I’d dealt with on Curved Ridge!