Since meeting Super Bagger Tansy through my Munroaming group we have been comparing  notes on which Munros we still have left to summit in our first rounds. Tansy is miles ahead of me and only has 20 or so to bag to compleat. She has a final Munro date in August and she is keen to be hiking Munros as frequently as she can.

Last week she mentioned a trip from her home in Aberdeenshire south to Tyndrum for a day. She had Ben Cruachan and the neighbouring Munro in her sights and she asked if I fancied a sneaky day away from my desk on the Wednesday. The weather forecast was very good for mid-March so I hesitated for only a few minutes before agreeing to meet her near Tyndrum at 7.30am.

The night before the walk I happened to  mention to the G-Force what we had planned and he immediately put the fear of god into me about “the step”! Apprently there is a bit of a scamble on the ridge between Ben Cruachan and Ston Diamh and in winter conditions the G-Force reckoned it might be pretty dodgy. A call to his pal Sensible Scott (an MRT member to boot) confirmed that”the step” might be icy or snowy and a bit of a worry in winter conditions.

Ben Cruachan in the distance.

Fortunately Tansy had another Munro, Ben Lui, that she had not hiked already so we made a hasty change to the plans. And I am very glad that we did because Ben Lui turned out to be snowy and icy enough for excitement but without too many fears and as we looked over to Ben Cruachan we could see that it was occasionally surrounded by swirling cloud and likely to be far snowier than we would have liked.

I had walked Ben Lui many years before but an away-from-my-desk hike to any of Scotland’s stunning summits is fine by me. In any case, Super Bagger has promised that when she has completed she will walk any Munro that I ask her to.

1) Flexibility is the key to safe walking, especially in winter.

2) Always take crampons and ice axes with you on a winter walk even if it looks non-snowy from the bottom. We encountered far more snow and ice near the top of Ben Lui than we imagined and enjoyed safely climbing a few sections in crampons.

A spot of crampons and ice axe walking.

3)  Map reading with a fellow lady walker is gratifyingly easy.

4) Knowing that you have all day to walk an easy-ish Munro allows lots of time for taking photos, chatting and stopping for lunch at the top.

5) Leaving early and being back at my desk for 2pm made me feel amazingly smug. 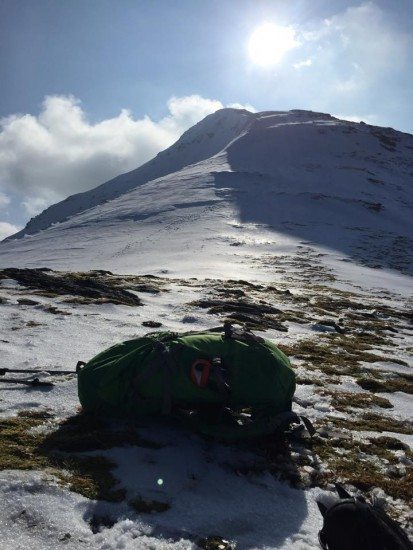 Looking up to the top of Ben Lui.

6) Scotland on a sunny day truly is one of the most beautiful places in the world.

7) On arriving at the summit I suddenly remember when I had previously walked Ben Lui and its neighbouring Munro. It was the overhanging snow cornices that jogged my memory! The G-Force and I enjoyed similar conditions one winter when we first met.

Girl mountain – and a man leg!

8) I am lucky to have a freelance work life that allows for sneaky away days to hike mountains.

9) When Super Bagger and I do eventually walk ben Cruachan it will be a fabulously sunny day without snow and we will great “the step” with far less nerves as we head on to bag Stob Diamh. (Well, that is what we kept telling each other!)