Hiking the Ring of Steall in sunshine

I have walked a number of fabulous mountain ridges in Scotland and been variously lucky and unlucky with the weather. On Saturday, the Munro Weather Gods shone warmly on me and I walked the Ring of Steall in glorious conditions.

This is a walk that I have long been keen to do. I have walked the path into Glen Nevis many times, mainly to summit other Munros (or to try to!), but I had not tackled the Ring of Steall. I am so pleased I saved it for one of the sunniest days of 2015.

I had been told previously that the ridge involved a fair bit of scrambling (that some people, like me, might find it daunting). I had heard that the wire bridge crossing below the Steall Waterfall was a challenge. And I knew that this was a long hike with almost 1,700m of total ascent and four Munros to bag.

I was, I confess, a little nervous about the outing. However, the G-Force reckoned I would be fine and when a trip came up with the Deeside Hillwalking Club (some of whom I met through Tansy through my Munroaming page), I decided that this weekend was the one to go for it. I hadn’t even looked at the weather forecast until the night before but, thankfully, it was promising.

What is the Ring of Steall?

The Ring of Steall is located in a Lochaber mountain range called the Mamores. It takes in the Munros, An Gearanach, Stob Choire a Chairn, Am Bodach and Sgurr a’Mhaim. There are ridges, one named the Devil’s Ridge, and arêtes to deal with but none of it proved too challenging.

There is also a wire bridge to tackle, over the river that is fed by the fantastic Steal Waterfall nearby. Rather than being scary, the bridge was a fun start to the ridge walk. For some reason, I’d imagined the bridge to be located high above a gorge but, in fact, it’s fairly close to the river and only a little daunting because you need to traverse and length of wire.

See this video of my traverse.

I am not particularly Munro bagging fit right now but after two weeks of cycle touring in France I am in generally good shape. I found the total ascent to be well within my capabilities and it was only the long descent from Munro Four that caused me any leg pain. (However, the day after the outing my thighs were still burning!)

The walk is around 10 miles long so it was great to have the Deeside walkers to chat to as we climbed up and down and up and down. The G-Force gave up a treasured day of climbing to join us, too. His worries about his fitness were totally unfounded as he could often be seen pushing on at the front of the group.

I enjoy group walking. There is always someone who is walking at your speed at any point in the long outing and who you can pass the time with, chatting about this and that. It’s a great way to meet new people and to discover all sorts of things about their lives.

We regrouped every so often and stopped for snack and lunch breaks. 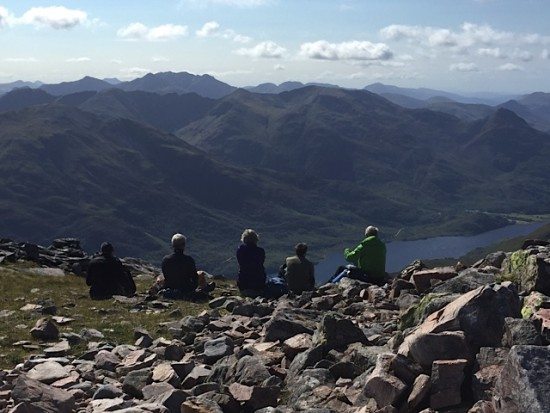 But the best thing about this ridge walk is the incredible views. At any moment there were stunning scenes of recognisable mountains, such as Ben Nevis, the Grey Corries, Aonach Mor, Aonach Eagach, Stob Ban etc to drink in. ON a superbly sunny day, the panoramas were even more magnificent.

The fantastic summit of ben Nevis in the middle distance.

I have walked most of the Munros in this area and it was great reliving all those outings with the G-Force as we hiked the ridge from Munro top to Munro top.

We also witnessed what we thought was an MRT helicoptered rescue on the north face of Ben Nevis. We all watched transfixed as the helicopter circled the ben and then hovered over the top of the dramatic cliffs. It turned out, on later enquiry, they were changing their rescue ropes for the winter season. The MRT member that I chatted to at the Ben Nevis Inn that evening told us that they had done a rescue on the ben that day: A Ben Nevis Race runner had popped a knee on the descent so they had whisked him off to hospital.

The final Munro of the four was Sgurr a’ Mhaim, and the tallest of the day’s outing. This meant we had a steep and long descent from the summit to the start point. I find that the going down is far more arduous than the up and my legs were squealing in pain by the time we finished.

Thankfully, the Deeside walkers had the wherewithal to park a car close to the base of this Munro, thus saving us all a two-mile walk back to the Glen Nevis car park along the road. I could have hugged the person who told me this as we approached Munro three of the day.

We rounded off the fantastic outing with a meal at the Ben Nevis Inn. I have rarely seen so many walkers milling around the bottom of the ben as we did on Saturday evening. But, it’s no wonder given how amazing the late summer weather had been.