The two-day Original Mountain Marathon (OMM) took place in Tweedsmuir, Scotland, this weekend (October 24 and 25) and was enjoyed by a variety of participants in a range of categories, from Elite to Short Course. I asked first-time entrant Jacqui Byrne what she learned during her first OMM.

A bit of OMM history

Formerly known as the Karrimor International Mountain Marathon (or KIMM), the OMM is held in a different region across the UK every year. It was first held in 1968 and continues today.

Every three to five years, the event comes to Scotland in such places as Comrie, the Lowther Hills, Cowal, Arrochar Alps and Galloway.

The OMM has also expanded worldwide with events in Japan (next month), Iceland in May 2016 and an Alpine OMM in August 2016.

It was Gerry Charnley, a mountaineer and orienteer, who designed the KIMM to test orienteering skills in extreme circumstances. The full-length OMM course is a double-marathon length race.

The course is not disclosed until the race begins, so each team must have good navigation skills. Some have called the OMM the forerunner of modern adventure racing.

The aim of the OMM is to collect as many points from your chosen checkpoints over two days of eventing. You must be self-sufficient, carrying all the kit that you require for camping overnight.

22 things learned during the OMM

Jacqui Byrne, of Sheffield, took part with Stuart Smith in the Short Score category. Stuart is a trainer with NAV4 Adventure, a mountain running skills, trail and ultra navigation company based in Cumbria. Jacqui is a keen hill runner and gained her NNAS Silver award early in 2014 and has done several marked and unmarked trail ultras, the Grand Tour of Skiddaw being her latest race, but has never taken part in a mountain marathon before.

Her response when Stuart asked if she would like to do the OMM short score with him was: “Fantastic!”

She adds: “I had a look at the website and thought, ‘Great!’ Five hours Saturday, four hours Sunday, maps, find as many controls as possible. What a fantastic way to get into mountain racing and with an experienced navigator/fell runner so there was no chance of getting lost”. She also thought: ‘I’ve run in the Lakes plenty, all I ultimately have to do is keep up with him.’ ”

Here’s what she found out during her first mountain marathon event.

OMM attracts a big field: Thousands of people entered and took part in the OMM in Tweedsmuir. Jacqui and Stuart stayed in Moffat, while the start was in the Tweedsmuir hills.

There’s a category for all: There are eight race categories and everyone competes over two days with an overnight camp.

No luggage transfers: The OMM is a self-sufficient race so that means carrying all your gear for two days and an overnight. This includes clothes, food, tent, stove, sleeping bags and all the overnight camp stuff while racing.

Lightweight is not always the best: Jacqui had a good look at what other racers were carrying. She commented on how lightweight some of the elite racers gear was and how she would not have managed in such low temperatures with similar kit, it was definitely worthwhile to carry heavier kit in order to stay warm.

Take plastic bags: Stuart advised Jacqui should take plastic bags for the overnight camp to keep their feet dry. Jacqui commented that this was something she would not have thought of and was grateful for the insider tip.

Make sure the bags are good quality: “Well, the plastic bag trick would have worked if mine had not leaked,” says Jacqui. “Next time I’m taking those super thick M&S bags!” 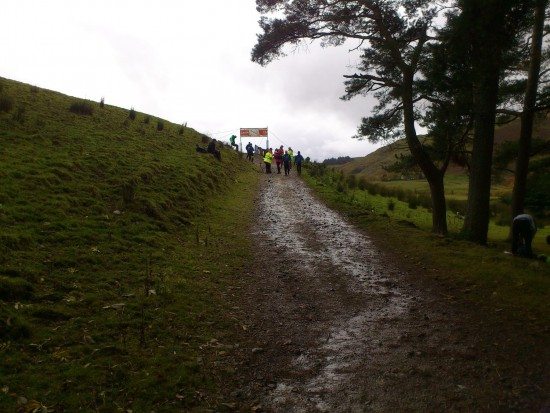 Just try to keep up: Jacqui had been practising her navigation in the Peak District before the event and hoped to share in the navigation with Stuart but she quickly realised this wouldn’t happen as if they had slowed down to her level of navigation they wouldn’t have gained so many points. This was fine with her however as she learned a lot from watching Stu and realises it’s all about practice, practice and yet more practice!

She says: “I saw Stu fly off over a crest of a hill and I realised that as he was flying he was taking a bearing, running on the bearing, checking the bearing and all without even breaking pace. I thought, ‘Just watch and learn and keep the **** up as best you can!’ ”

Starter’s orders: The dibber for the event is attached to your wrist on the Friday evening at registration. It stays there until the end of the event on Sunday.

Expect tough terrain: Jacqui was surprised by how tricky the terrain was during Day One of the OMM. She says: “It was really wet, technical, steep, bracken/bog/hummocky stuff, which made it very hard to get any running rhythm going for long at all. Plus there were shin and knee-deep streams to cross so my feet were wet from the start of the day.”

You can still smile: Although the event was very challenging Jacqui was able to enjoy some highlights including “amazing views from the top of hills and seeing a winter hare”.

Meet the stars: Jacqui was thrilled to meet with some of the elite runners. She says: “At one point we were sat outside our tent chatting with Kim Collison. Later we chatted with Jim Mann and Adam Perry about the race.”

Hunger is huge: Jacqui couldn’t believe how hungry she felt on Day One. She says: “I had thought, ‘Ah, five hours of running, that won’t take too much to fuel’ and based on my previous ultra experience it shouldn’t have.”

But she hadn’t realised how much energy she would expend so quickly on the tougher terrain. She says: “Added to this the uphills were so steep that I couldn’t breathe let alone eat on them. Then the downhills needed so much concentration to stay upright with the backpack on that I didn’t eat on then either. It got to a point where I was swaying around and after I’d fallen about five times in 10 minutes I stopped to eat.

“I just don’t think you can imagine the effort that you’ll be expending when you haven’t done one of these events before.”

Good fuelling: In retrospect, Jacqui learned that she should have taken more food with her. She says: “It’s a common problem of mine in races not to eat enough, but on something like the OMM it’s definitely important to get used to eating regardless of whether you’re going up or down hill as, unlike in a trail ultra, there is no time to stop to eat.

“I also could have done with more food for the overnight camp. In future I’ll soldier the extra weight in order to have a full belly.

“ My emergency rations consisted of half a large bar of Fruit and Nut chocolate – about 500 calories worth. There probably are lighter options but I’ll find that out for next time.”

As tough as a tough trail run: Jacqui reckons day one of the OMM Short Score course left her as tired as a 40-mile trail run.

Jacquie dressed in all her OMM layers.

Layers to love: Jacqui was amazed by how many clothes she needed to wear just to keep warm in camp on the overnight section of the event. At one point she had on: A long-sleeved race top, Icebreaker baselayer, Tog24 layer, Montane Prism jacket, Montane Minimus, Skins, race tights and waterproof trousers.

The cold of night: Despite having “a brilliant sleeping bag and bivvy bag”, and sharing a tent with Stuart, Jacqui still needed two pairs of leggings, a long-sleeved running top, a baselayer, a fleece and a woolly hat to stay warm overnight. She says: “It’s flipping cold up there (Scotland) at night. I had a fairly decent sleep on and off.”

You’ll start early: On day two a bagpiper wakens racers at 5.45am. This allows plenty of time for striking camp, eating breakfast and preparing for day two of racing.

Stuart and his tent.

Be prepared to make changes: On day two Jacqui found the going just as tough to start with. She says: “The first hill really nearly killed me it was so steep. I couldn’t look to the side or behind me because I was getting dizzy from the height of it. And it went on forever.

“The controls that day were also quite spread out and there was a large out-of-bounds area due to a deer hunt and men with guns.

“Stuart and I got to the first control then had a look at the options. I knew I was too tired from Saturday to climb down to what was option one and all the way back up again so we bypassed that and planned a different route.”

Enjoy the good scores: On day one, Jacqui and Stuart scored 130 points. They gathered 100 points on day two. Jacqui commented that their scores were quite respectable. Overall, they came 36th out of 84 pairs which is a great result for a first try.

Some runners run fast: In the Elite category, men’s pair Kim Collison and Adam Perry triumphed in a time of 13:31:51 while Nicky Spinks and Jean Brown were first females (vets) and 14th overall in 19:33:41.

Superb atmosphere: Jacqui described the OMM as a “brilliant race, atmosphere, people, setup, event and more. I’ll definitely be back next year and now that I know how tough it is I can prepare properly!”.

Find out more at OMM.