Travel by bike: La Sarthe a Velo route in France 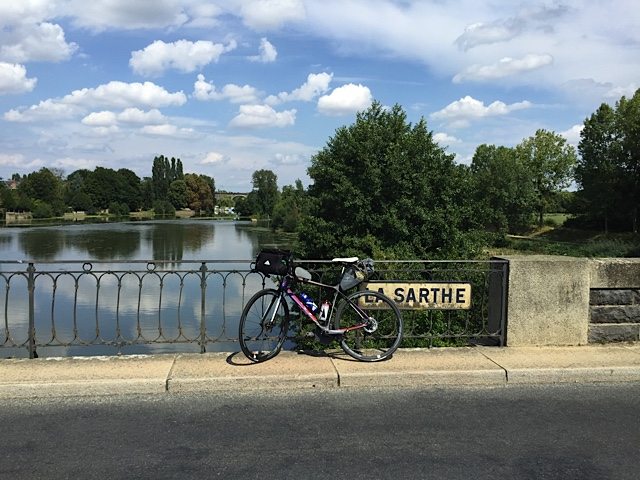 Last summer, I cycled solo in the north of France. Here is my travel article about the cycle route, La Sarthe a Velo. 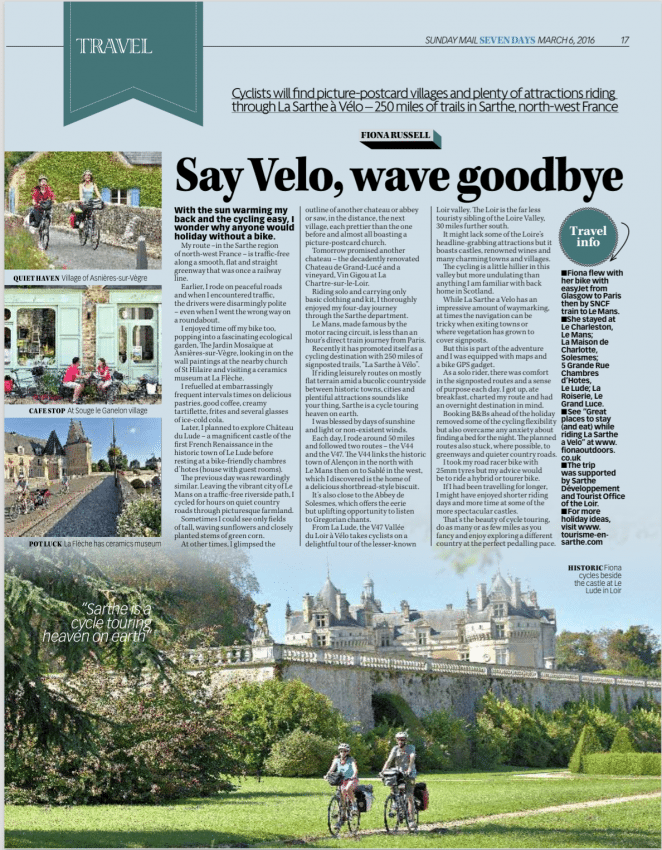 With the sun warming my back and the cycling so easy-going it feels like I’m cheating I wonder why anyone would holiday without a bike.

This afternoon the route in the Sarthe region of north-west France is traffic-free along a smooth, flat and straight greenway that was once a railway line.

Earlier I rode on peaceful roads and when I encountered traffic the drivers were disarmingly polite (even when I went the wrong way on a roundabout!).

I’ve enjoyed time off my bike, too, popping into a fascinating ecological garden, The Jardin Mosaïque at Asnières-sur-Vègre, looking in on the wall paintings at the nearby church of St Hilaire and visiting a ceramics museum at La Fleche. 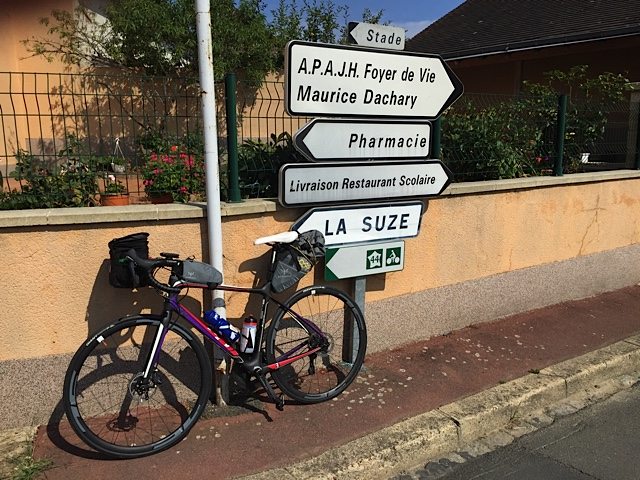 Later today, I plan to explore Château du Lude, a magnificent castle of the first French Renaissance, in the historic town of Le Lude before resting for the night at a bike-friendly chambres d’hotes (house with guest rooms).

Yesterday, was rewardingly similar. Leaving the vibrant city of Le Mans on a traffic-free riverside path I cycled for hours on quiet country roads through picturesque farmland.

Sometimes I could see only fields of tall, waving sunflowers and closely planted stems of green corn.

At other times I suddenly glimpsed the outline of another chateau or abbey, or saw in the distance the next village, each seemingly prettier than the one before and almost all boasting a picture-postcard church. 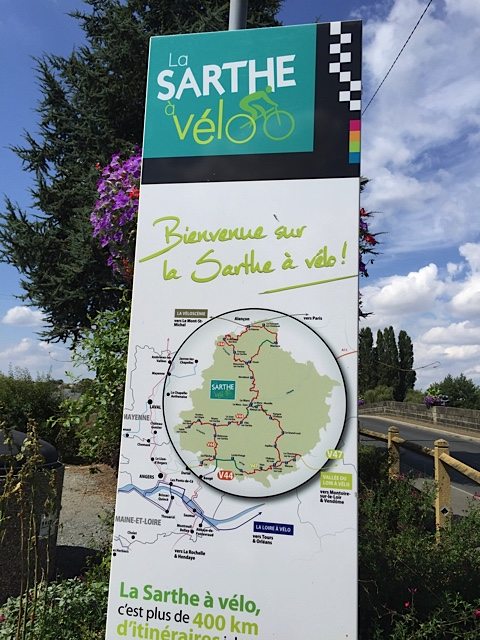 Riding solo and carrying only basic clothing and kit, I am thoroughly enjoying my four-day journey through the Sarthe department.

Perhaps best known for the largest settlement, Le Mans, made famous by the motor racing circuit, the region is less than an hour’s direct train journey south-west of Paris.

More recently it has promoted itself as a cycling destination with some 250 miles (400km) of signposted trails entitled La Sarthe à Vélo.

If riding leisurely routes on mostly flat terrain amid a bucolic countryside and between historic towns, cities and plentiful attractions sounds like your thing, Sarthe is a cycle touring heaven on earth.

Luckily, I have also been blessed by days of sunshine and light, or non-existent, winds.

Each day I ride around 50 miles (80km) and follow two routes, the V44 and then the V47, to give them their shortened names. 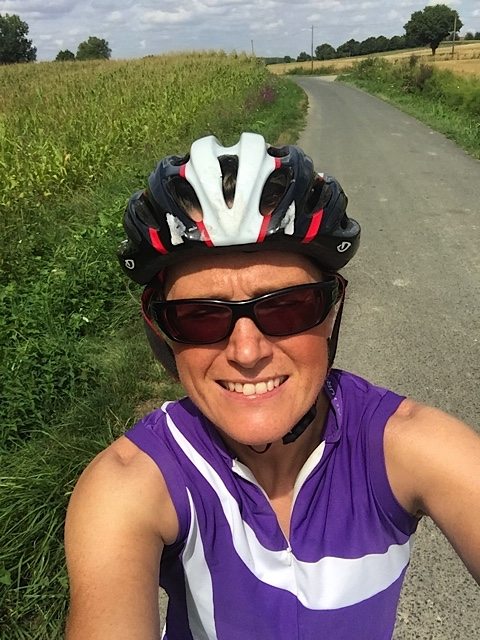 The V44 links the historic town of Alençon in the north, with Le Mans, then on to Sablé in the west, which I discover is the home of a delicious shortbread style biscuit.

It’s also close to the Abbey de Solesmes, which offers the eerie but uplifting opportunity to listen to Gregorian chant.

From La Lude, the V47 Vallée du Loir à Vélo takes cyclists on a delightful tour of the lesser-known Loir – without an “e” – valley.

The Loir is a far less touristy sibling of the Loire Valley, located some 30 miles further south.

It might lack some of the Loire’s headline-grabbing attractions, but it still boasts castles, renowned wines and many charming towns and villages.

The cycling is a little hillier in this valley but more undulating than anything I am familiar with back home in Scotland. 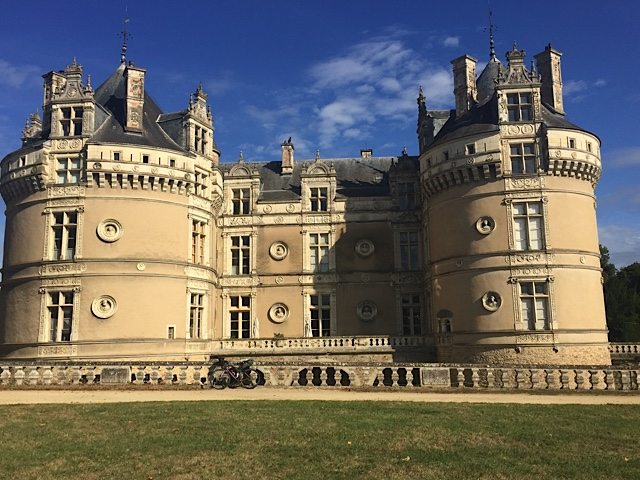 While La Sarthe a Velo has an impressive amount of waymarking, at times I find the navigation can be tricky, for example, when exiting towns or where vegetation has grown to cover the signposts.

But, for me, this is part of the adventure, albeit occasionally frustrating, and I am well equipped with maps and a bike GPS gadget.

Occasionally I have to resort to checking my next direction on the handy compass app on my iPhone.

As a solo rider, there is both comfort in the signposted routes and also a sense of purpose each day.

I get up, eat breakfast, chart my route and have an overnight destination in mind.

Booking B&Bs ahead of the holiday removes some of the cycling flexibility but also overcomes any anxiety about finding a bed for the night.

The planned routes also stick, where possible, to greenways and quieter country roads.

I took my road racer bike with 25mm tyres and although there were some sections that would have suited a mountain bike I didn’t once suffer a puncture. 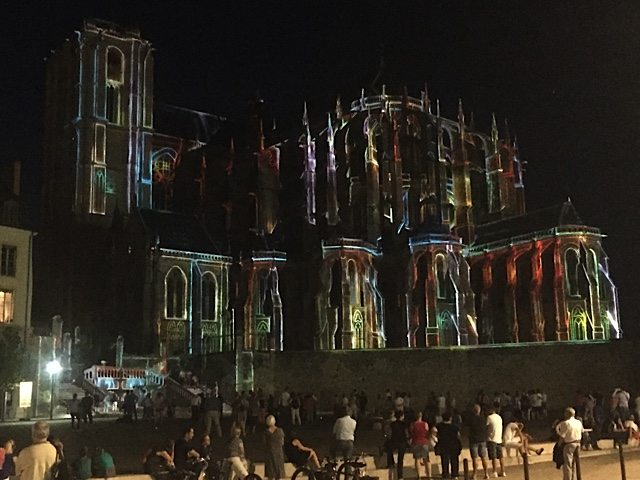 My advice would be to ride a hybrid or a tourer bike and to avoid very skinny tyres on a racer bike.

My planned routes proved to be just about the right amount of time for satisfying cycling and and stop-offs at cafes and landmarks.

If I had been travelling for longer I might have enjoyed shorter riding days and more time at some of the more spectacular castles.

That’s the beauty of cycle touring: Do as many or as few miles as you fancy – and enjoy exploring a different country at the perfect pedalling pace.