The long-ish drive to Glenfeshie, near Kincraig and just south of Aviemore would have been unremarkable if we had not have got lost and then seen a badger crossing the road. I can’t recall if I have seen a wild badger before (I think not) and the G-Force said he definitely had not. Badgers look much more graceful than I imagined.

So our diversion along the wrong side of River Feshie as we tried to reach the car park at Achlean didn’t seem so bad, although it did add half an hour to a three-hour journey from Glasgow.

Still, we got a good night’s sleep in Fern the Campervan before our friends Rebecca and Al arrived at 9am. Rebecca’s first words, after saying hello, were: “I can’t believe the weather! South of Dalwhinnie, from Glasgow area, there are stunning blue skies and here we are in cloud. I am so sorry for my weather forecasting.”

She needn’t have worried, however, because the cloud lower down the glen created a stunning above-the-cloud-view as we climbed the first Munro. I love walking above the clouds and looking down over a marshmallowy sea of clouds. 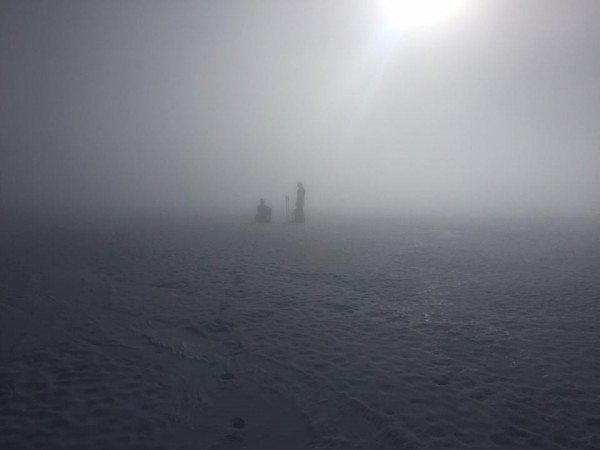 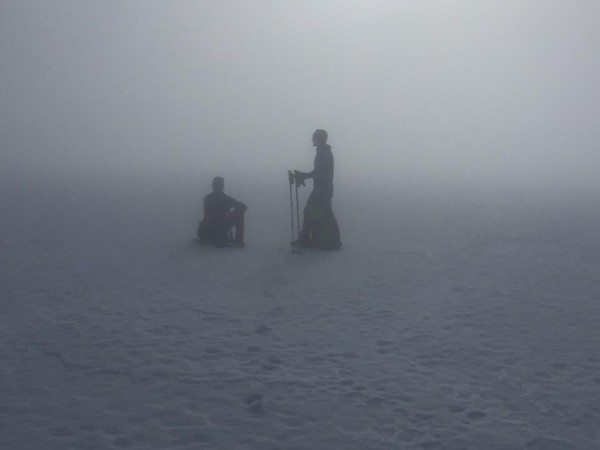 The hike up to Sgor Gaoith is rarely steep. The route follows tarmac from the car park before joining a trail. A small pile of stones indicates the turn to the left from the trail to begin the walk up the mountainside.

As we walked we talked. It’s a great joy of walking in good weather, being able to catch up with friends and meet new friends (I have known Rebecca for many years through work but it was the first time we had met the lovely Al, her partner.)

Any chance of following a trail disappeared as we climbed higher and met with far more snow than I had imagined there would be. The weather has been quite warm recently and I thought the snow would have melted but this is the Cairngorms and it does tend to be chillier than the central belt!

The snow cover and low cloud meant that Rebecca and I could practice our navigation. We are keen to head off to walk Munros on our own and I think we are more than ready for that but the protective men wanted to be sure! This might seem a little patronising but I don’t think so. Good navigational skills are vital for Munro bagging safely and both Rebecca and I admitted we had been lazy in the past about properly navigating (mainly because they guys tend to lead the way). We enjoyed the process of navigating and keeping the guys right on this walk! 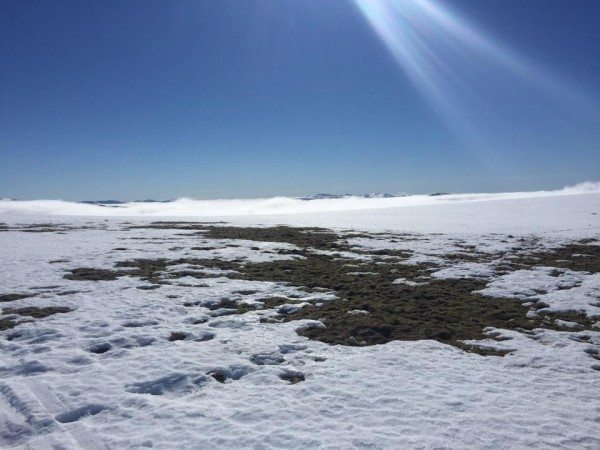 I am not sure at what height we suddenly popped out above the clouds. I think we were too excited to think about checking! I have been treated to this type of fabulous view before but it was the first time for Rebecca and we properly oohed and ahhed together. I think we might even have jumped up and down in excitement! 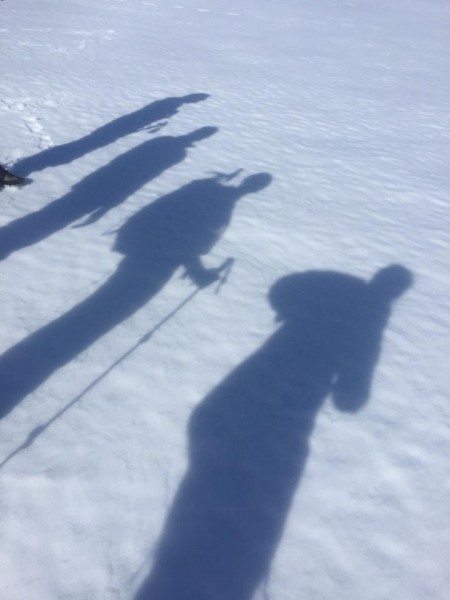 There’s a high point at 1049m, Carn Ban Mor, en route to Sgor Gaoith at 1115m. I left my rucksack here because we planned to return this way. Throughout this section the views were truly spectacular with a bright blue sky above us and thick fluffy clouds below us. Numerous surrounding mountain tops peaked out of the top. 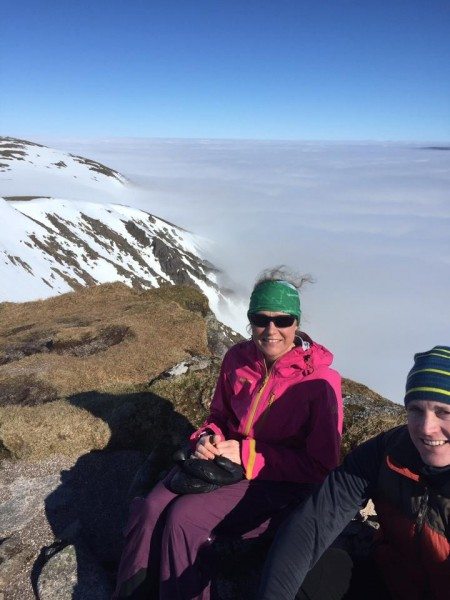 We stopped to enjoy the views at Sgor Gaoith and I enjoyed a minor celebration. This was my 200th Munro!

As we retraced our steps to Carn Ban Mor the cloud thickened and we had to use a map and compass and follow a bearing to re-find our rucksacks.

Sadly, the rest of the day was mostly spent in clouds. The conditions, with snow covering most paths and tracks, made it very tricky to navigate although between the four of us we walked roughly the right route.

When walking on snow you can usually make more an A to B route, rather than sticking to a trail. After descending Sgor Gaoith in a south, south-westerly direction we began the long and gentle climb to Mullach Clach a Bhlair at 1017m.

We spent ages trying to find a track that would serve as a “motorway” to the summit in the summer but this weekend it was covered in snow and very little was in evidence. 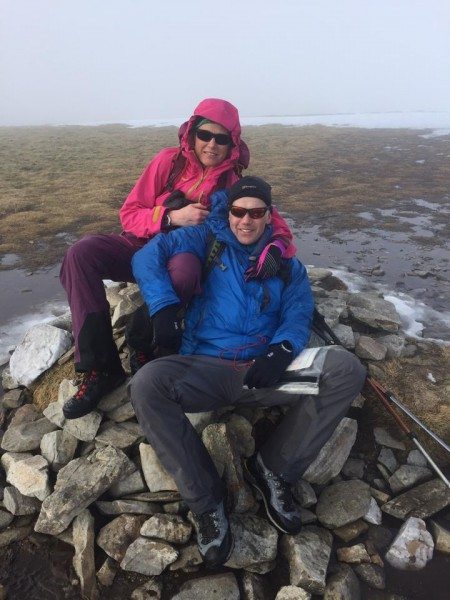 While the entire 14.5 mile route to bag both Munros looks like a fairly easy outing on the map, on the ground and in snow, it ended up being a long day. After a quick stop on the second Munro summit (my 201st Munro and Rebecca’s 219th. The guys have already walked a round) we headed west towards the River Feshie, where we then walked (what seemed like forever!) along the eastern banks and back to the car park. 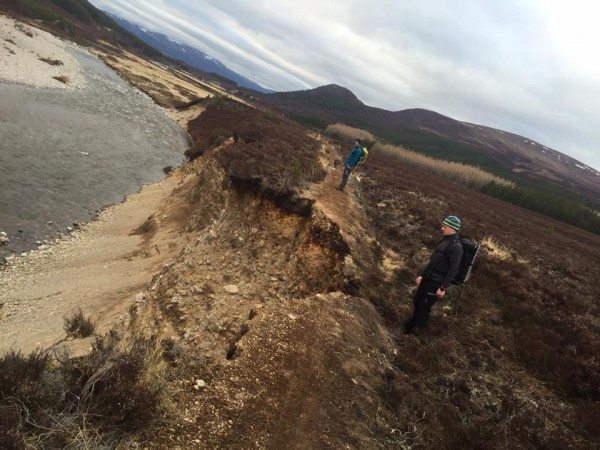 Large chunks of the bank had been washed away and on various sections we needed to walk away from the river side to negotiate big riverbank landslides. It is frightening to think how powerful the water flow must have been when it washed away the land along the edges of the river.

After a long day and at least 14.5 miles we were delighted to reach our cars – and then head to Dunkeld for a much needed re-fuel at The Meeting Place. It was a superb day of Munro bagging and one with lots of great memories.

See the route on Munro Central 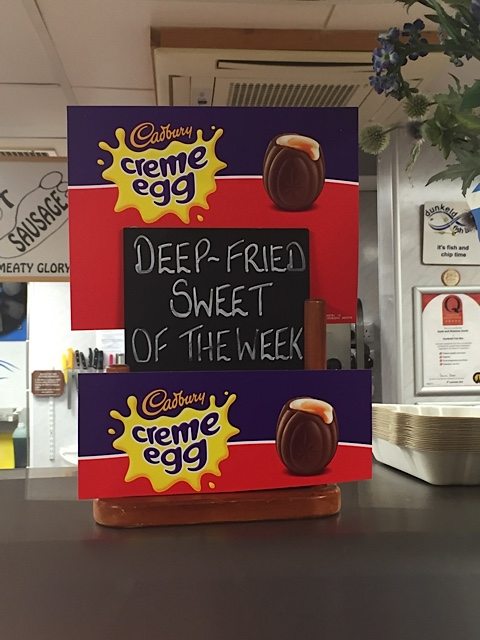 One thing I have forgotten to mention is the deep-fried Crème Eggs! On the way to Glenfeshie on Friday night, the G-Force and I stopped for chips at Dunkeld Fish Bar. The owner was very welcoming and very chatty.

When I pointed to a sign that said they sold battered and fried Crème Eggs he told me they had sold two boxes of them in the past week. I said I didn’t think I could stomach one of these so he told me about all the chocolate bars they have battered and fried over the years, including Toblerone, Mars bars (obviously), white chocolate bars etc. He reckons these sweet treats are very popular.

Having once tried a small bit of battered Mars bar and found it to be way too sweet I am not at all sure but if you fancy something different I would recommend this great gem of a fish bar. The chips were very good and they are very imaginative with their battered chocolate bar ideas!