More fear on the Cuillin Ridge 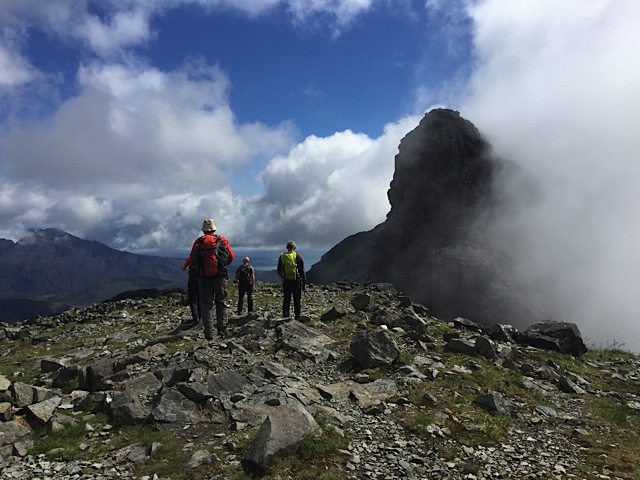 It was only about 11am by the time we had all summited the In Pinn on a recent trip to the Cuillin. Having finally managed to eat something and calm my nerves I decided I “might as well” join the other guys to do two more planned Munros, Sgurr Mhic Choinnich and Sgurr Alasdair.

To reach Mhic Choinnich we needed to descend Sgurr Dearg on steep boulders and scree before making our way upwards again. I had thought that with the In Pinn over and done with I could relax a bit. However, I had no idea of what was to come.

Descending from the In Pin.

The climb and scramble to reach the top of Sgurr Mhic Choinnich was far more exposed and scary than I had been prepared for. I was thankful for cloud cover because this saved me from looking at the drops, ridges, ledges and horrible height too frequently. Every so often the clouds parted and I was left reeling at the exposure.

Sgurr Mhic Choinnich rises up ahead of us.

Although there is nothing about the scrambling sections that are majorly technical it’s the sense of raw exposure that puts so many people on edge. I could feel the bitter taste of fear rising up from my stomach again.

Too may times I thought I would freeze mid way through a steeper section and I dearly wanted to turn back and head for home. I swore a lot to myself and out loud. I wanted to be brave but I found it impossible.

I tried to tell myself that nothing could be as bad as the In Pinn and yet the higher we climbed the worse my anxiety became and by the time we were on the top I was completely rigid with fear.

I couldn’t see how I would be able to move from where I was sat, stiff and jabbering on about being totally out of my depth and completely, impossibly stuck. I swear that I wondered briefly if the only way back would be by helicopter.

The guys tried to calm me and they offered so much support and kindness but I was in some kind of shock.

Sgurr Mhic Choinnich. I really, really did not want to be there.

I decided then that I would need to try to descend this Munro and return to the van without doing Munro three with the others. I never wanted to be back on the Cuillin Ridge. Ever.

The G-Force told me he would rope me to him and we could see where we got to. With mounting hysteria I told him that was the most stupid Idea I’d ever hear because if I fell he’d fall, too, or if he fell, I’d fall as well. I wouldn’t listen to reason. (I noticed later that the official guides had their clients roped to them, so it seems that is the sensible thing to do.)

Somehow I was persuaded to set off again and to descend my second Cuillin Munro. I felt no satisfaction with my achievements, only awful and crippling anxiety.

As we passed a guide, Lou Reynolds, (working for Skye Guides), who I’d chatted to at the base of the In Pinn, the G-Force wisely asked her to explain what it would be like to walk to Sgurr Alasdair as compared to making a full descent of the third Munro, Sgurr Mhic Choinnich. She said she could not advise me personally but she explained that it would be tricky and there would be exposed scrambles and a ledge, known as Collie’s Ledge. She said it would be a tough undertaking, just like the descent of  Mhic Choinnich. She said it would be exposed either way.  I still wasn’t sure.

However, I guessed I would regret it the following day if I didn’t try.

I decided I would head towards Sgurr Alasdair but if I didn’t like it we’d turn back.

The incredible views (I can appreciate them now!)

The bid for Sgurr Alasdair

To start with the descent path towards the bealach between Sgurr Mhic Choinnich and Sgurr Alasdair seemed okay. Tommy led the way with Johnny just behind, then me and G and Danny and Billy. They guys chatted and seemed in awe of the views. I didn’t dare look to my right where I sensed there was a huge drop.

Then things went quiet. No one spoke and I wondered why. I just tried to focus on each step ahead and I kept my eyes level, rather than looking down. We rounded a long curve in the mountain and the rocks seemed to suddenly widen. 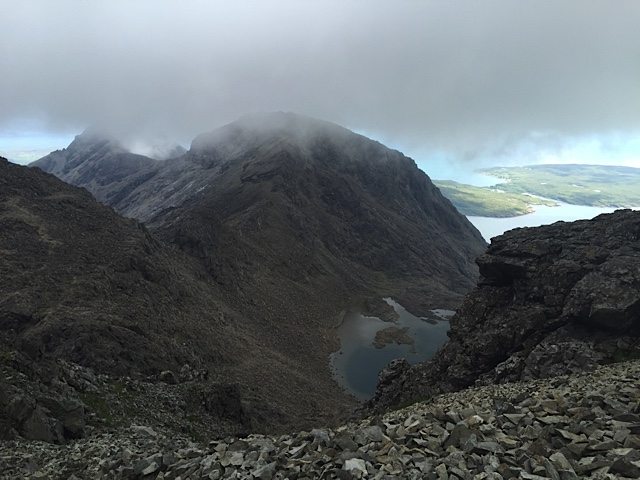 Apparently we had just walked Collie’s Ledge and no one, least of all G, could quite believe I’d got on with it. Looking at photos of that ledge once we’d returned home makes me feel utterly sick. It’s a very narrow path on the side of the mountain and the drops below are ridiculous.

Collie’s ledge from the distance.

The rest of the descent and ascent was completed with a mix of sheer fear and incredible hope. I dearly wanted to have bagged three Munros – the three that are said to be the hardest of the Cuillin Ridge – but every step I took made me feel sick and anxious.

The huge amount of adrenaline created by a day of fear was getting the better of me. Apparently I kept saying over again: “What, we have to go up there? We need to go down there? Aren’t we a near the top yet? I can’t believe I am having to do this.” They guys put up with a huge amount to help me to overcome my fears and I am very thankful for their kindness.

Back climbing between Sgurr Mhic Choinnich and Sgurr Alasdair.

In particular, Tommy was there at each step, on every scramble and during tricky descents. He helped to guide my hands and feet and to give me the confidence to go on. I am incredibly grateful to him.

G was utterly amazing. I wasn’t too kind to him at times because I was so afraid and I was quite rude verbally but he put up with me and encouraged me to go on. He was roped to me as well and this must have taken a lot of courage.

Finally I could see the last section of Sgurr Alasdair. At first it looked quite easy, just a short scramble. But when I was on the scramble the exposure almost overwhelmed me. I wanted to touch the top and then get the hell off of it. Which I did. I still feel incredulous at what I achieved! 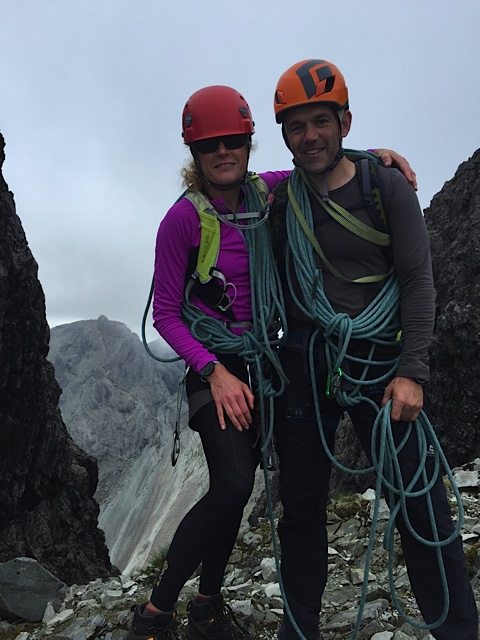 I felt a little relief as we headed to the scree chute descent.

We made our descent via a scree chute. It wasn’t easy and I felt quite exhausted. The overall hike wasn’t beyond me physically but I was drained mentally. 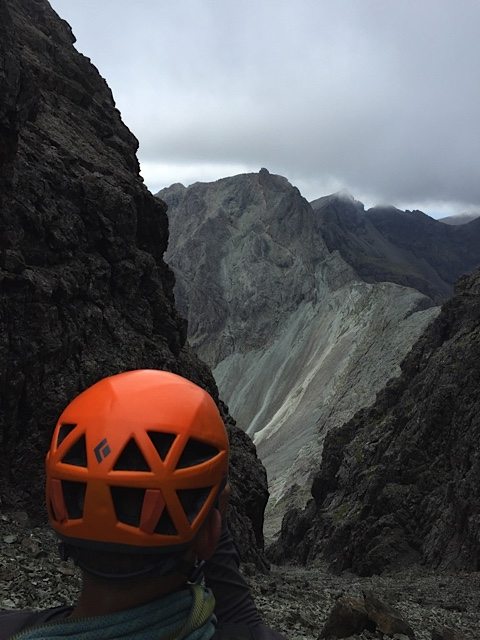 Eventually we reached the stunning lochan located far below in the corrie and we rested for a while. I paddled into the cool water and looked up at the impressive Cuillin around me. The amphitheatre of rock and ridges is truly breath-taking.

Now, at last, I could allow myself to smile properly. For the rest of the exit walk I chatted away happily. I enjoyed the views over the Skye coastline and I looked back and up in awe of what I’d managed to do.

I know I still have eight more Cuillin Munros to hike and I am sure they will each pose difficulties for someone like me with a fear of heights but I feel as though I might well be able to compleat a round of Munros. I have 75 still to do and one day I think I will be walking my last Munro with friends.

My huge thanks to G, Tommy, Johnny, Billy and Danny for an extraordinary day in the Cuillin on Skye. Billy has only one Munro left to do to compleat his first round and I wish him all the very best with that.

Enjoying a lie down and a glass of Champagne back at the campervan.