A work day on the Munros: The Brothers Ridge 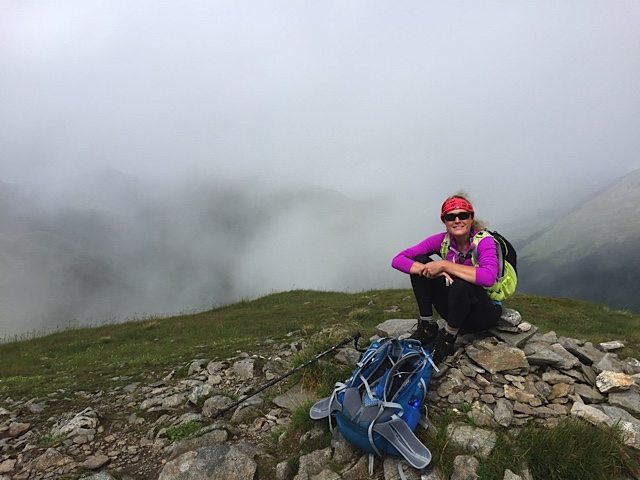 Sometimes there are amazing advantages to a freelance working life. Friday was one of those days. I got away from my desk to walk three Munros in Glen Shiel: Saileag (956m), Sgurr a Bhealaich Dheirg (1036m) and Aonach Meadhoin (1001m), also known as the Brothers Ridge. The weather was far better than forecast, I enjoyed great company (a fellow journalist) and the walk was easier than expected.

This is the glen where I first “got” the concept of walking Munros. A long day on The Five Sisters (three Munros) – the neighbouring ridge of the Three Brothers – some seven years ago left me excited. I suddenly realised why so many people that I knew enjoyed walking big mountains and over long and challenging days.

I had no idea then that I would become a Munro bagger – and that seven years later I would find myself on the Three Brothers walking my 210th Munro. 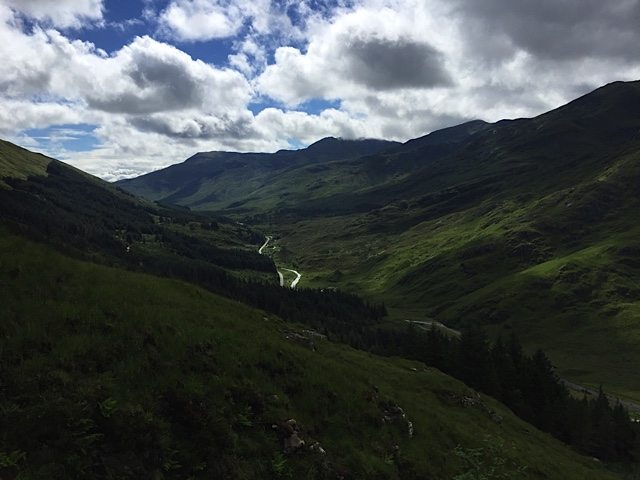 Making the most of a weather window

I met Rob, a fellow Munro bagger, on Ben Cruachan in February. He is a member of the Milngavie Mountaineering Club and I enjoyed walking with the group. We realised we both had some of the same Munros still to walk to finish a first round and we pledged to walk a few together.

Five months later and we finally had the same spare day and the same goal: The Three Brothers. While the weather had been pretty good all week in Glasgow, the forecast for Glen Shiel wasn’t so encouraging but we decided to take our chances. You just never know how Scottish weather will turn out on the day.

After all, it was a Friday away from the office for both of us and a walk – even in the rain – would feel like a treat. The rain was heavy as we left Glasgow and continued through Glencoe and Fort William, but as we turned the corner and caught our first glimpse of Glen Shiel the sky looked promising. We could even see blue and not clouds! 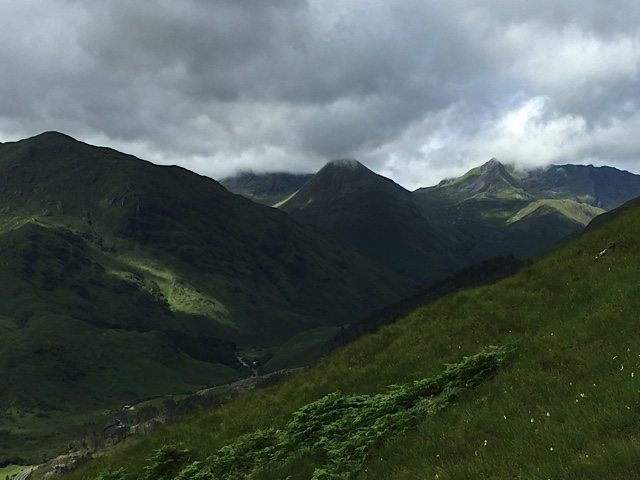 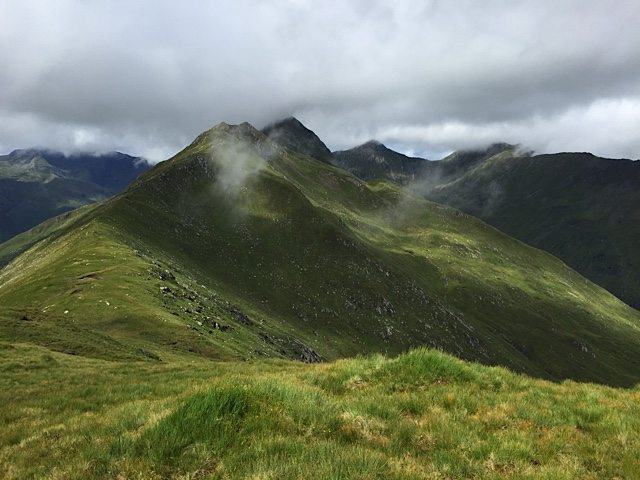 How to walk the Three Brothers

This is an A to B walk that starts or finishes at the Cluanie Inn. There was a rumour that the inn would offer residents (and maybe even people who planned to eat a meal there after their walk) a lift to the end of the ridge some 7kms down the road. (This would be charged, obviously.) However, when Rob called them the day before they said, without discussion, that they were too busy to offer a lift. Hmmm.

Rob had secured such a lift the previous summer but maybe you have to have a booking for an overnight and not just a promise of eating and drinking in their hostelry.

The other options are to hitch a lift or catch a bus. There are few buses and the only convenient one would be the 10.38  CityLink bus from Cluanie west along to the walk start. (The bus is the one heading for Skye. We were told by the hotel that it can be 10 minutes early or half an hour late or sometimes on time!).

We arrived early at the Cluanie and thought we would try hitching a lift. You could also leave the hitch hike or bus until the end of the walk but I thought it was better to get all the hassle out of the way at the start.

Just as we were giving up and preparing to flag down the bus a lovely American couple, visiting Scotland from North Carolina, stopped in their hire car. They seem utterly charmed to pick up two Scottish walkers. “You have such a pretty accent,” the lady told Rob. They were off to Skye for the day and they chatted happily about their tour of Scotland, which they told us is “so beautiful; so fantastic”. They seemed amazed by our walk plans – and almost disappointed that we were not travelling further along the road with them.

We would have happily chatted to them about the wonders of Scotland as they drove but we had a walk to do. 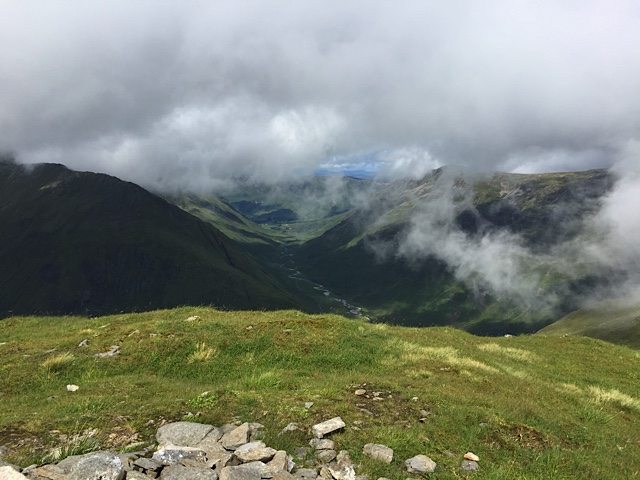 The walk to The Bros Munro 1

The climb up starts steeply and without a warm up. It heads directly to the bealach and without letting up. Rob and I set a fair-to-middling pace and chatted as we hiked, revelling in the thought that maybe, just maybe, the weather forecast was wrong.

As we hiked the sun beat down and we shed layers to cope with the heat. From the bealach, the route goes east (the Five Sisters ridge is west) and flattens out before more of a steady up. I had a nostalgic moment at this point, trying to recall my walk of the Five Sisters Ridge so many years ago. 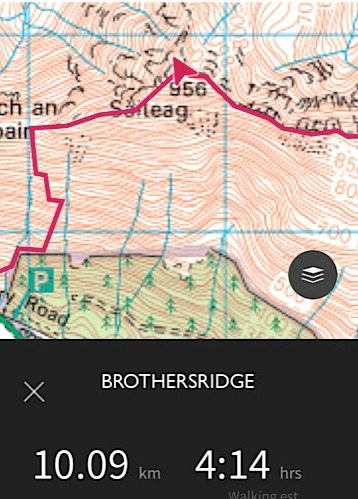 It felt like Saileag summit was upon us before we had really put in much effort. As I glanced at my watch I wondered if the estimated time of six to eight hours on the website WalkHighlands was a bit of an over-estimate. 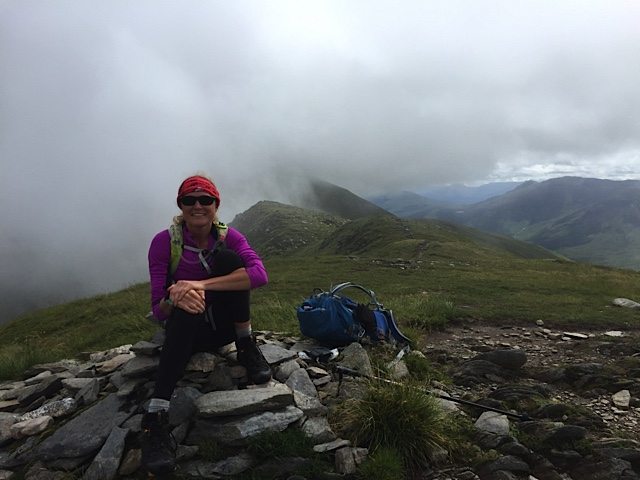 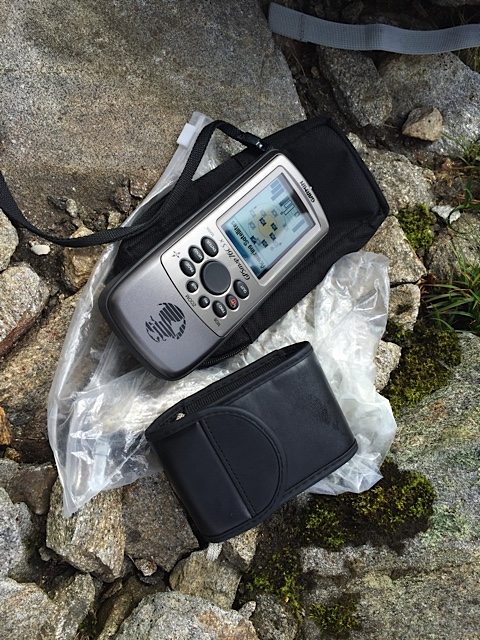 Rob’s vintage GPS gadget. It still works a treat but it looks rather heavy!

The views from the summit were stunning. From every direction there were numerous mountain peaks and fabulous deep glens.

Rob is the editor of the Scots Magazine and so we had a lot to talk about. When you are walking with someone you don’t know too well and with shared interests you find the time flies by.

Or, perhaps, these Munros are not too tricky, which would explain why Munro 2, Sgurr a Bhealaich Dheirg, came along quite quickly. The route leaves the ridge for a short while to head over a narrower, scrambly section (this is not too tricky) to reach the slightly outlying Munros. 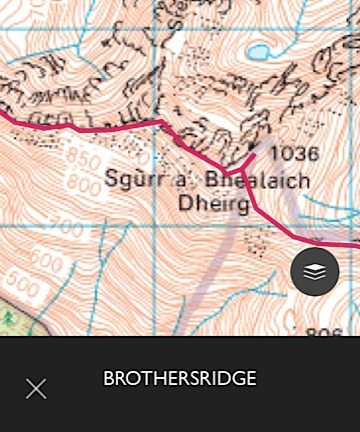 The weather continued to be sunny and clear and we enjoyed our lunch perched on this Munro at 1036m. 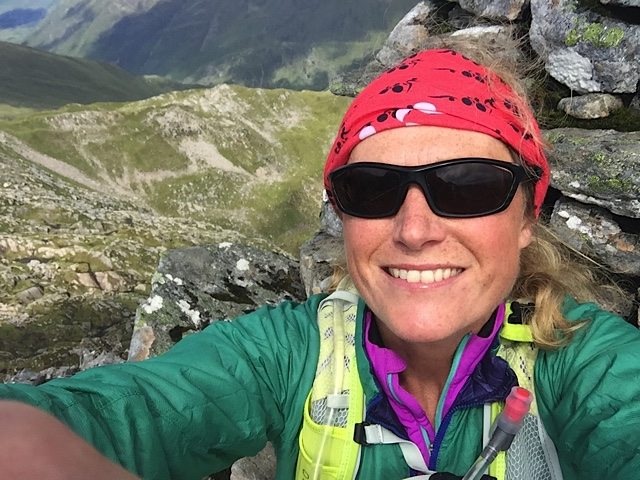 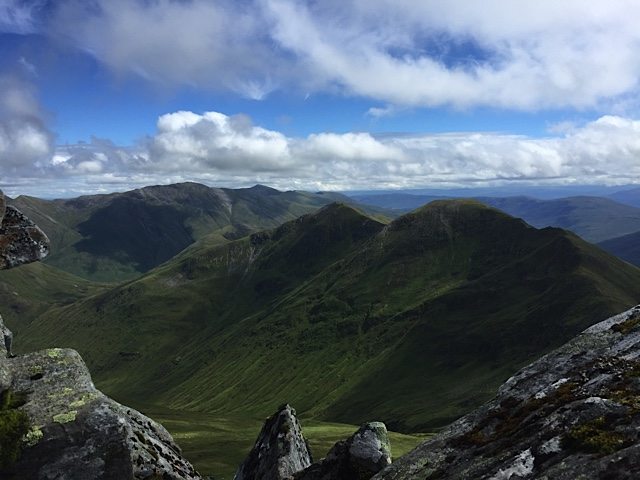 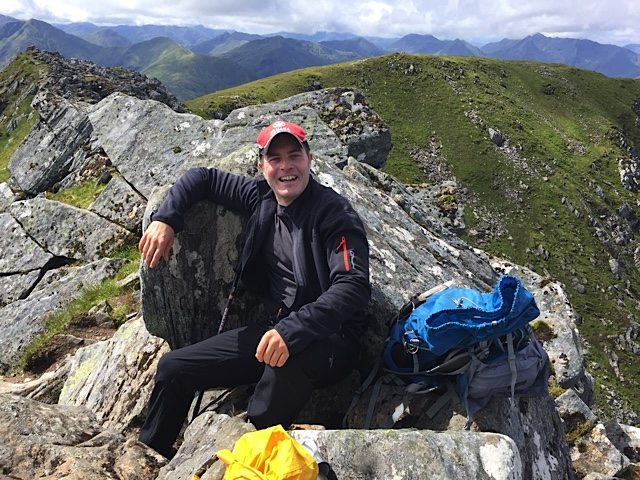 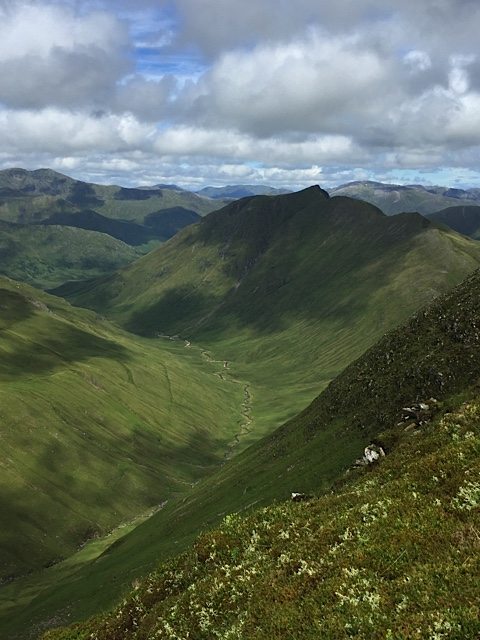 More ridge and a third Munro

The third Munro was further along the ridge. Following a relatively easy down and then another short climb, we reached Aonach Meadhoin at 1001m. We congratulated ourselves on my 210th Munro and Rob’s 245th. 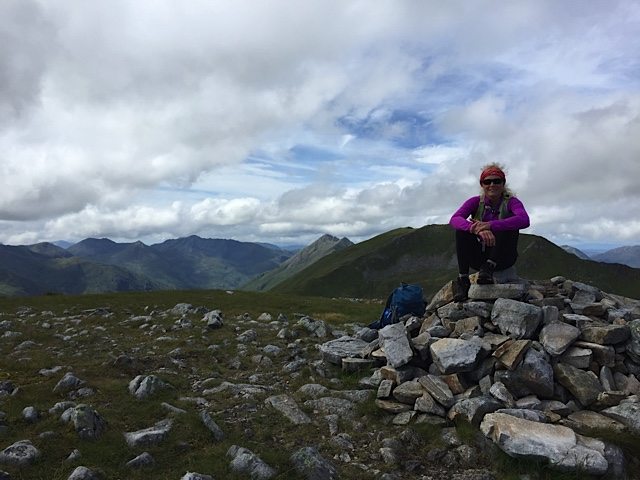 As is true of pretty much all Munro outings, the walk out is always far further than you think it will be. To reach the Claunie Inn, walkers need to climb another two smaller summits, first Sgurr an Fhurail (987m) and other (unnamed) top of 864m, before the proper descent. 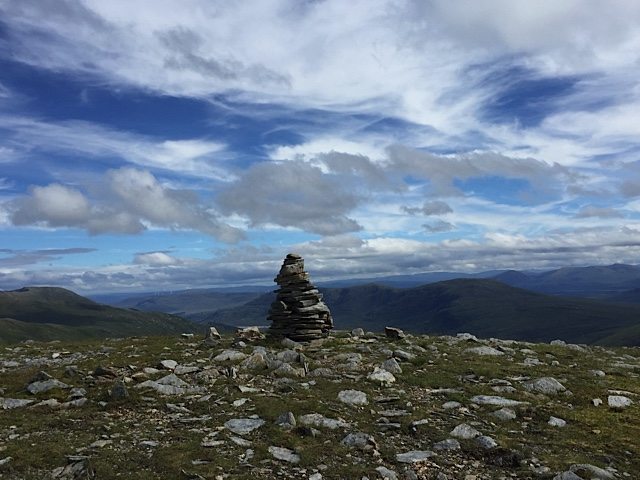 The inn was always in sight and we talked, as we walked, about food and drink. Rob reckons that during the second half of a Munro hike the chat always turns to these topics. I had my sights on a Crabbie’s alcoholic ginger beer and Rob was clearly thinking about a bar meal.

It seems arrogant to suggest that these are three fairly easy Munros but we completed them in 4.5 hours and without ever feeling like we were going too fast. We set a steady pace, stopped to sort layers, take photos and eat snacks and lunch. Yet we still finished the walk in a relatively short time. (If you had to walk another 7kms back to the car at the end it would feel like far more of an effort!)

The night in between another Munro day

Rob planned to head home to his partner and I had arranged that the G-Force would drive up in Fern the Van for an overnight before more Munros. I’d planned to sit and do some work while I waited at the Claunie Inn but they told me their wifi wasn’t working.

Rob and I drove to the Ben Nevis Inn instead. He enjoyed his much needed bar meal. I had a starter and a Crabbie’s. Rob left and I sat for a couple of hours in the comfy sofas of the Ben Nevis Inn catching up on work emails and writing. The G-Force arrived just in time for last bar meal orders and we enjoyed a few drinks before heading to the van to sleep.

The best days in the Scottish mountains are those that without expectation turn out to be really rather brilliant.