A book has been published that celebrates a new list of mountains called The Archies. The Archies are Scottish mountains with a summit of at least 1000m and a height drop of 100m between the top and surrounding land.

Dr Paul Fettes came up with a plan to walk all the Archies for charity and now he has written a book telling the story of the challenge and with details of all the 130 Archies.

You can see a pdf of my Sunday Mail column about the Archies book.

What are the Archies?

For decades walkers have ticked off the famous Munros and Corbetts – and now there is a new target, The Archies.

Identified by metric, rather than imperial, measurement, The Archies are all the mountains of Scotland with a summit of 1000m or more.

The 130 Archies are also defined as having a 100m height drop between the top and the surrounding land.

This new list of Scottish mountains is the brainchild of Dr Paul Fettes, who has also published a book, The Archies.

Paul, a consultant anaesthetist at Dundee’s Ninewells Hospital, said: “When Sir Hugh Munro defined his list of Munros in the late 19th century he used the imperial measurements of the time.

“So his list was the Scottish mountains with a height of at least 3000ft.

“The same is true of the Corbetts, which are defined imperially as between 2,500ft and 3000ft.

“But it makes more sense today to use the more modern metric measurement and 1000m seems like the perfect height for a list of mountains.” 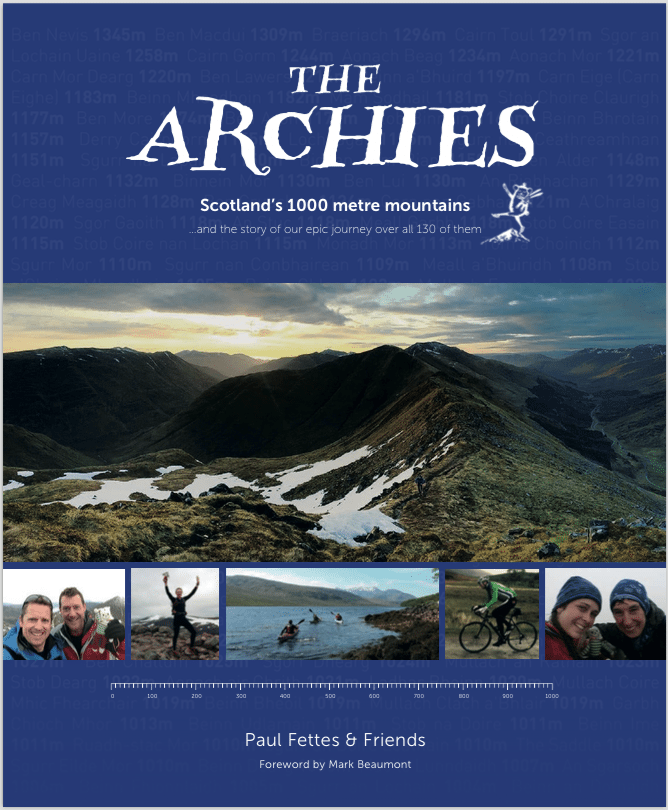 It was two years ago that Paul and a group of medical staff at Ninewells came up with the idea for a challenge to raise funds for the Archie Foundation Tayside Children’s Hospital appeal.

They completed a relay by running, cycling and kayaking between the Archies over just 16 days. The challenge comprised more than 1700km in distance and at total ascent of almost 10 times the height of Everest.

The challenge mascot was a toy rabbit called Rabbie, which was passed between relay members.

Paul said: “We averaged nine mountains a day and it felt like a huge challenge but it was also very enjoyable and rewarding.”

The group raised £33,000 for The Archie Foundation, which is the official charity of Tayside Children’s Hospital at Ninewells.

Paul said: “After completing the fund-raiser I decided I wanted to spread the word about a new list of Scottish mountains. I thought the Archies might become a great goal for people who like to bag hills.

“The list seems perfect for the modern walker and it includes many great mountains, including the most northerly Archie of Bidein a’Ghlas Thuill (An Teallach) at 1062m, near Ullapool and the most southerly Archie of Beinn Ime at 1011m, near Arrochar.

“That’s when the idea of a book came about and it’s brilliant to see it in print.”

The Archies book tells the story of the charity challenge with details the individual journeys of each of the runners in their own words.

It features beautiful images of Scotland’s stunning scenery, as well as maps of the route and social media posts from the challenge.

There is a foreword by ARCHIE Foundation patron Mark Beaumont.

Paul added: “By listing The Archies, the book also provides a new way to classify Scotland’s highest mountains in a way that is consistent with the metric maps that have been in use for several decades.

Readers of the book will receive a free A3 map of all the Archies with their copy, so that they can “bag” them too.

The book, which costs £19.99, can be purchased online from www.archie.org and from good bookshops.

All profits from the book sales go to The Archie Foundation’s appeal to raise £2 million for the twin surgical suite project at Tayside Children’s Hospital.