Jamie Aarons was the first woman home in the new Ochil Ultra 450 mile race 2017. Her win was all the more remarkable given her recent ill-health.

Jamie reports that she approached the Ochil Ultra with “a healthy dose of enthusiasm combined with a healthier dose of trepidation and caution”.

She said: “The race first caught my eye as an inaugural event not far from my doorstep, on trails and up hills that I would like to get to know better.

“It was advertised as a marked, point-to-point route and I could get back to my car via public transportation if other options failed. With checkpoints every 10 miles and the mention of snacks at the finish it seemed rude not to enter.”

However, the race was just two weeks after Jamie was discharged from five days in an Italian hospital after pulling out of the epic the Tor des Geants race. She was forced to stop at 130kms due to rhabdomyolysis.

She was admitted to hospital with higher creatine kinase levels than the medics had ever seen.

A week after coming home to Scotland her blood results showed normal levels again and Jamie decided she would do the Ochil Ultra but in the knowledge she may need to pull out at any stage.

Running in her comfort zone

She said: “Prior to the Ochil event, I overwhelmed myself with post-rhabdo recommendations, most of which boiled down to ‘don’t be an idiot’.

“I was not keen to get ill again so I was very sensible by my standards.

“I was there to see some new trails, support a new ultra, and ideally make it at least part of the way. I was more than prepared to stop before the finish and I had a magazine and snacks in my running bag just in case.

“I genuinely didn’t care if I made it to the finish line and getting to the start line was a pleasant surprise in itself.”

Throughout the race, Jamie paused regularly to check how she was feeling, especially her quads. These were the muscles that were most painful in the TdG.

She added: “Also, at the risk of providing too much information, I forced myself to pee far more often than I would typically so that I could check for anything that showed up a return of the illness. Dark pee is a major marker of rhabdo.”

Jamie enjoyed the first nine miles of the race on a combination of trails from Stirling Uni, then quiet road and trail of varying levels of mud to get up and over Dumyat.

At the first checkpoint at Tillicoultry, a spectator told her she was the leading lady.

Jamie said: “I forced myself to wipe all sense of competition from my mind. It actually panicked me a bit that I was going too quickly if I was in the lead.

“But I felt within my comfort zone and I was really enjoying the trail, the chat with other runners and the sunshine so I just promised myself that I would never look over my shoulder during this event.” 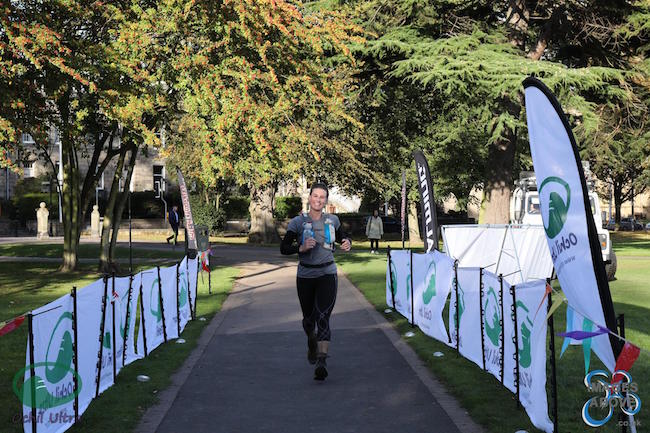 The second checkpoint, at almost exactly 20 miles, was full of relay runners preparing for their change-over. This was also been the starting point of the 30-mile race, which had started before Jamie’s arrival.

She said: “The race was very well timed and organised to get a 50-miler, 30-miler and relay all running simultaneously without mass confusion.”

At this point, Jamie met Angela, one of the aptly named support angels who, continued to pop up at checkpoints for the rest o the race.

Jamie said: “Angela came to my assistance at the Glen Devon CP to sort through my drop bag, fill a bottle with coke and send me on my merry way.

“I spent the next few miles wondering if she was someone I knew, such was her kindness. I think, in fact, she was an incredibly thoughtful stranger who met me at every checkpoint from then on, ready to fill bottles and sort snacks. She even gave me a lift back to Stirling from the finish.

“It’s people like Angela, the marshals, and so many of the other runners who make me love ultras. The hills and trails are a bonus.

From Glen Devon, Jamie broke the race into five-mile chunks and at each point she reassessed how she was feeling. She said: “I reminded myself that I didn’t have to finish and certainly shouldn’t finish if I didn’t feel well. But I felt okay.”

10 miles to the finish line

She approached the first 40 miles not worrying about where she was placed or whether she would finish however with “just” 10 miles to go a desire to finish kicked in. She said: “The last CP was 40 miles, with just 10 miles to go, and I’d be lying if I said I wasn’t suddenly determined to finish.

“Seeing Angela was like seeing an old friend and I stopped briefly to collect my head torch – mandatory kit from checkpoint four onwards – stock up on grapes and cheese in my pre-made bag and take on plain water.”

After a one-mile road section, a marshal told me I had 1.1 miles on tarmac. Jamie said: “He really was that specific, which I was thankful for because I was looking forward to a bit of a walk up the next hill. If he had not told me this I think I would have ended up walking a lot of the tarmac rather than jogging.”

Jamie ascended Meikle Hill, above Perth, heading into forest and then, when the trees parted she was treated the view with a rainbow filling the sky.

She said: “I don’t tend to get particularly emotional while running but the fact that I was there, with this view, on these legs and only a few weeks after being connected to a hospital bed made me feel absolutely joyful.

“And just when I thought it couldn’t get any better, a relay runner from the local area passed me with the news that I had less distance to go than I thought. He also told me that it was predominantly downhill for the next few miles into Perth.

“Downhills have been my nemesis in the past but this came as great news and my legs still felt pretty good. There was a flat road section coming into the finish that was probably the least scenic part of the day, but that was countered by turning into the finishing park and seeing the blow-up arch of the finish line.

“I was so pleased to have crossed the line feeling fit and healthy.”

Jamie jumps for joy at the finish line of the Ochil Ultra.

Praise for the Ochil Ultra

Jamie has only praise for the Ochil Ultra. She said: “It was a brilliant mix of terrain and it was incredibly well-marked. The marshals were cheery, encouraging and helpful, giving runners overviews of upcoming turns and distances.

“The GPS trackers were exceptional at giving real-time information on runner location, which came in handy at the finish where a monitor was set-up so we could follow the progress of folks still out on the course.

“In addition, all the drop bags were brought back to the finish from the four checkpoints, which is a great help for those who are indecisive and want to put extra kit in bags just in case.”

Jamie was also very impressed with race director Ben Finch. She said: “Ben welcomed every single runner through the finish line with a cheer and a smile.”

Also read the race report , which includes other results, and find out more at the Ochil Ultra.