During a trip to Comfrie Croft, I spotted a map of various local walks. I asked the very helpful Amanda at reception about the walking routes because I was planning to head off for an afternoon run.

I really wanted to run from Comfrie Croft, rather than drive to the start of a run. There is a trail that heads from the Croft along to the village of Comrie so that would be my starting point. 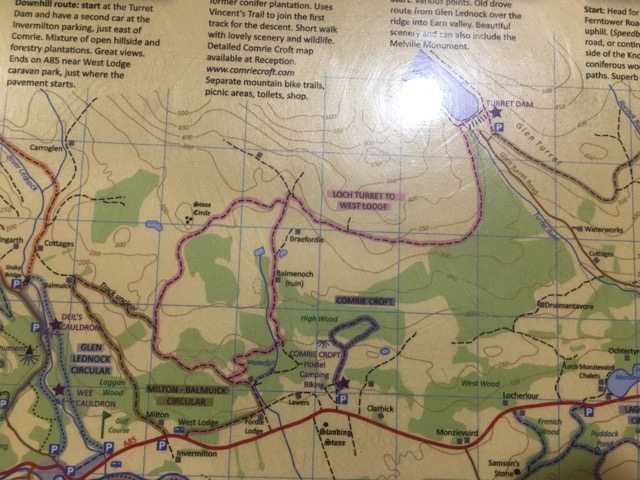 But the route (the pink one) that really took my fancy was to Loch Turret, high in the hills behind Comrie Croft and on the north side of Strathearn. I really liked the idea of going in search of the loch amid remote countryside and, from what I could see on the map, it would be easily possible in an afternoon. (I am laughing to myself as I look again a this map because it is clear to see there is a road to the reservoir, too, but let’s ignore that!)

If you want to walk the route I took from Comrie Croft I would suggest you dedicate a day to the activity. I planned to run.

A warm up on the bike

Bikes to hire at Comrie Croft.

First, though, the Comfrie Croft mountain bike trails looked too good to miss. I hired a bike from on-site Comrie Croft Bikes and set off from the back of the croft to explore the trails. (There is also a bike skills park and pump track close to the main car park for brushing up/testing your skills.)

The loops are spread out on the side of the hill, which allows you to progress your skills and determination as you go. I started by riding uphill on C1 and then descending on B1. Then I rode up again, a little higher this time, and descended on B2.

I loved the bumps at the top of B2. It was like a roller coaster for riders. The descent is filled with fun berms and more bumps, which made me grin.

Then I rode uphill again. I met another mountain biker who was new to Comrie Croft and he told me how much he was enjoying the routes. He said: “It’s great how you can ride up a bit, then do a downhill loop, then ride up a bit more and so on. I am off to test myself on the red route now.”

I decided to do another blue, B3, which was a more challenging than B1 and B2 but still manageable, even for someone with my poor mountain biking skills.

Then I tried a section of the red route, accessed from C3 climb. When it got too difficult I simply pushed the bike a bit.

By the way, the view as you come out of the trees on the B3 descent is fabulous. As I had been riding, the sky had brightened and the vista over rolling Perthshire hills under a blue sky was beautiful.

I enjoyed a few more laps and then descended on the blue route all the way back to the base so I could swap wheels for running trainers.

If you are riding at Comrie Croft you can make use of the bike wash, showers (small charge) and toilets.

In search of Loch Turret

This would make a great walk as well as a run.

My route from Comrie Croft to Loch Turret Reservoir and back.

There is a path that heads out of the back of Comrie Croft en route for Comrie village. I took this and felt at once enchanted. The trail heads through woodland and then passes a wonderful waterfall. In fact, even if you only walk as far as the waterfall I highly recommend you follow this trail.

The way is signposted to reach Comrie, about 2.5 miles, but at a big house with a French flag I headed uphill, rather than towards the village. (Thanks to Amanda for telling me to look out for this.)

This wide track quickly ascended, forcing me to slow to a slow trot. The track carried on zig-zagging up and up, before crossing a bubbling burn on a cute stone bridge and then continued further into the hills.

It wasn’t so steep that I couldn’t run but it was steep enough to make me breathe hard.

At frequent intervals, flustered grouse would dart out across my path and rush off with their feathers ruffled. They made me laugh.

At a large metal gate I stopped to look out across the wonderful view of rolling Perthshire countryside and above me I heard the sound of two birds. They were crying loudly and I saw them circling high above the trees. I am pretty sure they were red kites. I stopped to enjoy the fantastic sight as they swooped and rose on the thermals.

Through the gate I could see two small lochs (or ponds) with numerous waterfowl gathering close by or on the water. A large lodge building was set above the lochans and I headed towards the building before taking slight detour around the buildings of “Braefordie”, to the west.

At no point did I need to veer off a path or track and I enjoyed the sense of being surrounded by remote hills and mountains yet always on a well-trodden trail.

Above Braefordie, the path began to contour east. There was still a lot more up than down but the gradient was a little easier. I started to notice stone signs, presumably marking a water way or pipe from the high loch reservoir.

Every so often I would look up and ahead, in the hope of seeing Loch Turret but each time I referred to my ViewRanger map app I realised I had a little way still to go.

I kept telling myself it would be “just around the corner” and when it wasn’t I would persuade myself I should run on a bit further to see if it might be around then next corner.

At 7k I still hadn’t reached the loch and I wondered about giving up but I really, really wanted to see the reservoir and I didn’t want to give up.

I ran along the side of a thick forest, through a stone walled field of quizzical sheep (what was this mad woman doing running the hills on her own?) and continued on an ascending track.

I checked my watch and the distance and I figured that a lot of the return run would be downhill so I pushed on – and on.

Eventually that final corner did come. Up ahead I saw a dam wall and as I climbed still higher I could see over and across the large expanse of loch water. It was truly a gem of a place, with many mountain and hills creating the perfect high ground back drop.

I didn’t have time to stop for too long and I was aware that my energy levels were ebbing so I took a few photos, gave myself a quick congratulations and headed back down the track.

It’s strange, isn’t it, how the track back can often seem far longer than the one you have climbed? It makes no sense because on the way up you are working harder and walking/running slower.

To start with my legs felt the relief of running downhill but after about 30 minutes the non-stop jolting made my thighs and knees a bit sore. Still, I thoroughly enjoyed the chance to take in the fantastic scenery from the opposite direction. There is so much to see on a return leg of an out-and-back run/walk and it’s possible to imagine you are in a new setting.

As I ran downhill there were a few ups and they felt harder than the long up earlier in the afternoon, but mostly it was wonderfully downhill. I finally reached the small stone bridge and refilled my water bottle with fresh stream water. It felt deliciously cold and refreshing. I had eaten all the Jelly Babies I’d taken for snacks.

Finally, I made it back to the flag house and headed back along the path towards the croft, again stopping to marvel at the waterfall. As I retraced my steps through the quiet woodland on the edges of the croft I wondered what everyone else had been doing that afternoon.

I had met not a single person on my search for Loch Turret and I doubted many people had enjoyed such a fabulous afternoon of running.

PS: Oh, and it turns out that I have walked in the area before although I had never been able to see much. Above Loch Turret is the location of Ben Chonzie, a Munro that I have walked at least twice. Chonzie was also Hubby G’s last Munro of his first round. However, my previous explorations in this area were in wet and snowy conditions so I had not been able to marvel at the scenery in clear and bright weather.

PPS: It also turns out that I could have driven to the Loch Turret car park! See Auchnafree walk from Loch Turret. But if I’d done that I would have missed out on a great run that felt like I was properly exploring the hills.

I do love an adventure on foot. See Comrie Croft and Visit Crieff.