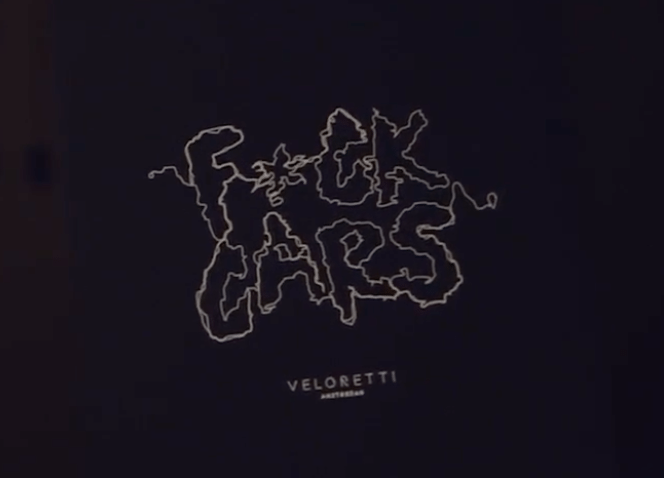 Veloretti, an independent Dutch bicycle brand, has launched a campaign to promote cycling in Europe’s cities. The company has declared it wants to become the voice for these silent sufferers and is using a provocative statement: F*ck cars.

Do you think this is too crude and brash ? Or is it the right way to go about challenging the frustrating war between drivers and cyclists on so many roads?

Certainly the message is clear but I wonder if it’s going to have the opposite effect of further annoying drivers.

When a car brushes past a cyclist, you’re likely to hear a tirade of expletives and this is precisely the message that Veloretti has decided to convey in a short film.

But instead of saying it out loud, they chose to say it with a bike, of course.

The film follows a hacker who uses his yellow bike as a digital paintbrush and the streets of Amsterdam as his canvas.

While he is zig-zagging across a city that is far from the Amsterdam we know from postcards, a mesmerising machine tracks his GPS data in realtime, and reproduces the exact path of his ride on a blank sheet of paper.

It’s only at the end of this 76.8km-long bike ride that we discover the result of his performance: A bold white-on-black “F*CK CARS”.

The technological choreography between bike and machine features a track from the UK-based artist Rival Consoles.

The film will be part of an online campaign demonstrating once and for all that bicycles own the cities.

Ferry Zonder, Founder of Veloretti said:”‘We started Veloretti not just to create the ultimate riding experience, but because we believe in cycling as the sustainable mode of transport for the future and hope to encourage people all over the world to take up cycling as an integral way to improve our environment and the way we interact with our urban landscape.”