An 87-year-old cyclist is thought to be the oldest man to ride from Land’s End to John o’ Groats. Even more impressively, Donald Wells cycled his 18-year-old folding Brompton bike on the 1000-mile journey the length of Britain.

Despite many challenging cycle trips around the world, Donald said the Land’s End to John o’ Groats cycle was the hardest thing he has done because of its “sharp, unforgiving hills”.

Donald, from Hampshire, took five weeks and two days to complete the route at what he described as a “leisurely pace”.

Tony Rathbone holds the current Guinness World Record for the eldest man to make the journey in 2014, aged 81. Donald and his son are investigating whether he will now be recognised for being the oldest record breaker. 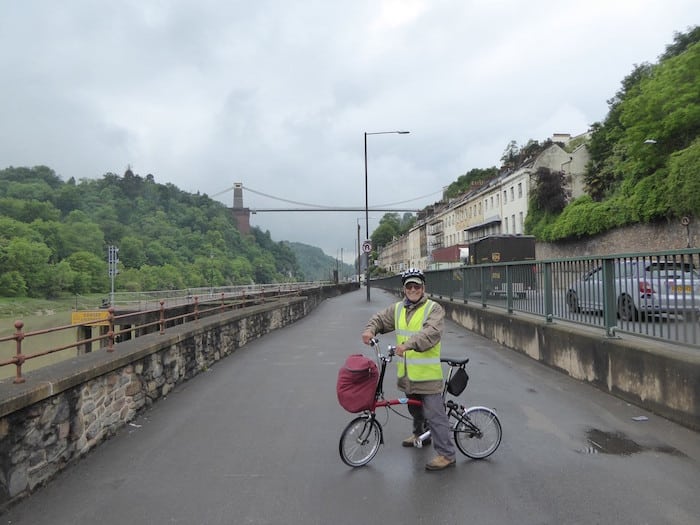 Donald in Bristol on his ride of the length of Britain.

Donald is a keen lifelong cyclist and member of the national cycling charity Cycling UK. He has been enjoying solo long-distance cycling trips since his wife passed away 23 years ago.

Donald took very few supplies on his latest cycling journey, stopping at petrol stations, cafes and local supermarkets for food. He slept in hostels, hotels and even endured a night on a park bench when he was unable to find a place to stay.

The only comfort that Donald will admit to is that he replaced the saddle on his much-loved Brompton before the start of the journey “for a more comfortable ride”.

Donald said he cycles for the sheer enjoyment of it. He likes to keep active and is part of a walking group at home.

He said: “I’m pleased with what I did but it’s just like any normal cycle ride for me, I don’t see it as anything particularly daring.

“I felt fine after I finished the ride – no aches and pains. I don’t rush and tear around. I take it easy.

“I suppose it’s what’s I’ve been doing all my life. I feel at home on a bike.”