Where there is a new cycling route or trail, you will usually find a record setter. This month, it was The Hebridean Way that became the focus for keen cyclist Nikki Sommers.

The accident and emergency doctor rode the 185-mile route non-stop along the length of the Outer Hebridean archipelago.

Most people take four to six days to cycle the 10 islands, including six causeways and two ferry crossings.

Nikki took a total time of just 14 hours and 18 minutes.

Nikki Sommers starts out in the dark.

She said: “It was a great route and very beautiful in many places but the wind and rain made some parts of the ride very testing.

“I was delighted when I finally saw the lighthouse at the Butt of Lewis after all the many hours on my bike.” 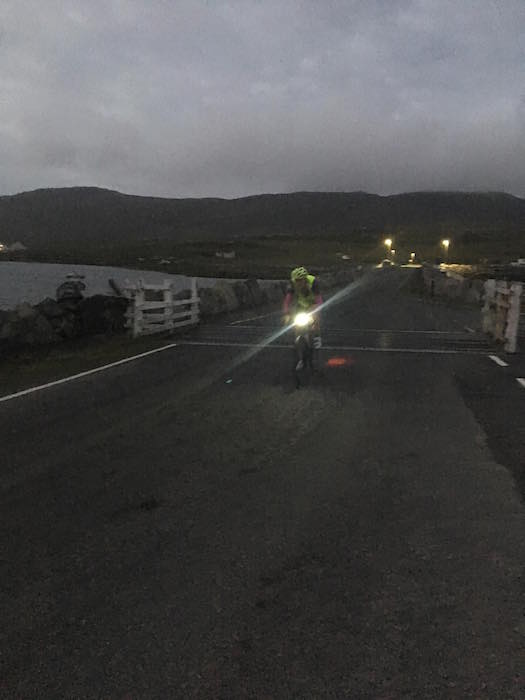 Nikki Sommers comes off a ferry.

The 30-year-old set out on September 2 at 5.45am from the community centre on the southern Hebridean island of Vatersay.

She cycled the length of Vatersay and neighbouring island Barra to complete the first 13 miles.

The first ferry took 40 minutes to travel between Barra and the third island of Eriskay.

Enjoying a tailwind, Nikki, from Sheffield, rode across Eriskay and continued north through South Uist, Benbecula, the small tidal island of Grimsay and North Uist.

Nikki Sommers tries to warm up.

She said: “It was great to have the wind at my back and as I headed north across South Uist I was easily hitting 26mph.

“But then the route starts to wiggle around the west coast of Benbecula, through Grimsay and North Uist, which meant horrendous cross winds.”

By 10.30am, as forecast, the rain arrived and Nikki describes a section cycling across the top of North Uist as “a low point”.

She said: “The wind gusted with such strength that I nearly fell off my bike a couple of times. I had to cling on hard to stay upright.”

Despite the challenging conditions, Nikki arrived at the ferry port on the eighth island of the trip, Berneray, an hour faster than expected.

She had cycled another 77 miles in just four hours and she was delighted to be met by her supporter husband Tom Ripley in their vehicle.

Nikki said: “I’d debated doing the route unsupported but because it was a Sunday I didn’t think I’d find enough places open to buy food and water.

“Tom supported me at various points along the route with food and dry clothes to change into.”

The Berneray to Leverburgh ferry took around an hour and left Nikki with some 95 miles to ride through the islands of Harris and Lewis.

There was also more than 7,500ft of ascent to be faced.

Nikki said: “I hadn’t been looking forward to the hills of Harris but they seemed to speed by easier than I’d expected.

“I was somehow managing to maintain good speeds despite the climbing.

“But then at about 140 miles I started to flag and as I turned west across Lewis I hit rock bottom.

“The wind had changed direction and I was battling more crosswinds. I was also on a road that that seemed to be non-stop uphill.

“At one point I got off my bike, sat down in Tom’s car and wondered what on earth I was doing.”

Nikki ate some of her food, including Scottish tablet, which boosted her energy. She also welcomed the return of a tail-wind.

She said: “Amazingly, the last 30 miles or so sped by, with my average speed climbing back up and the sun came out.

“I arrived at the lighthouse at the very top of Lewis to a beautiful sunset.”

Nikki finishes the Hebridean Way in a speedy time.

Her riding time was 10 hours 36 minutes, while the total time of 14 hours 18 minutes is thought to be a new “fastest known time” (FKT).

When The Hebridean Way was opened in March 2016, Scottish adventurer Mark Beaumont completed the 185 miles in less than 24 hours.

His promotional ride saw him in the saddle for 12 hours of total riding time.

Nikki is delighted with her new FKT but she believes the route could be completed in less time.

She said: “I had a long wait for the second ferry and if you commit to a quicker time between ferries you could knock off 90 minutes there, but I wasn’t confident enough to risk it.

“All I can say is that a record has now been set and it is waiting to be broken.

“There are a few rules in that cyclists must use the island ferries not speed boats, and they need to specify if they are supported or not.

“I have cycled the Hebridean Way before at a much more leisurely pace and really enjoyed it, however I also love a tough challenge and The Hebridean Way was a great non-stop ride.”

I write about Nikki in my Sunday Mail column. See pdf.

Find out more about cycling The Hebridean Way.