I ran along the John Muir Way to this stunning beach at Dunbar in East Lothian.

I am training for an ultra race of 50k. I decided to do this in celebration of my 50th birthday, although I am wondering why I set myself what now seems like a ridiculous target. Have a read of Training for an Ultra: The Menopause Pains.

I wrote that post mid-week and just as my period started. This helped to explain why I was feeling exhausted for the previous week. I confess I doubted if I could be bothered to try another run after the Saturday long run from hell. Tuesday’s intervals session also felt so ridiculously tough.

After that I decided I needed a couple of days of rest and recovery. I don’t find it easy to ignore a training session and I was frustrated not to join the Wednesday night hill run with the Westies but I knew I should be sensible.

On Thursday morning I went for an easy 30-minute run. I chose a different trail and I enjoyed the change of scenery. The 30 minutes felt ok, if rather slow.

Friday was to be my long run day of the week. With a Hen Weekend on the cards (my fabbie friend Vicky is getting married) I made another sensible decision: Run before the party madness and cocktails a three-day Hen Weekend kick in.

Running along the John Muir Way.

The weather was warm and sunny and a friend, Kerry (a former professional triathlete!), joined me for the first 50 minutes. It was amazing how much easier the run seemed when I was chatting with Kerry rather than thinking about the distance.

(I have no doubt Kerry could have done the whole run with me but she hasn’t been training specifically for this distance and so she decided she would run fewer kilometres than me.)

I can see how important it is to have mental determination, as well as physical strength, with ultra training. So many times I question the enormity of setting out for long, long runs and there are plenty of times while running that I want to stop, sit down and call a taxi.

Anyway, thanks to Kerry, the first hour whizzed by and then she waved me off and I continued to run towards Dunbar. I do like running in new places and I very much enjoyed the scenery. As I got closer to Dunbar I could smell – and then see – the sea.

The wide beach at Belhaven drew me onwards and while I “only” needed to run a total of 24km for this training session I was attracted to the sand and the sea so I ran a little more than the required 12km. 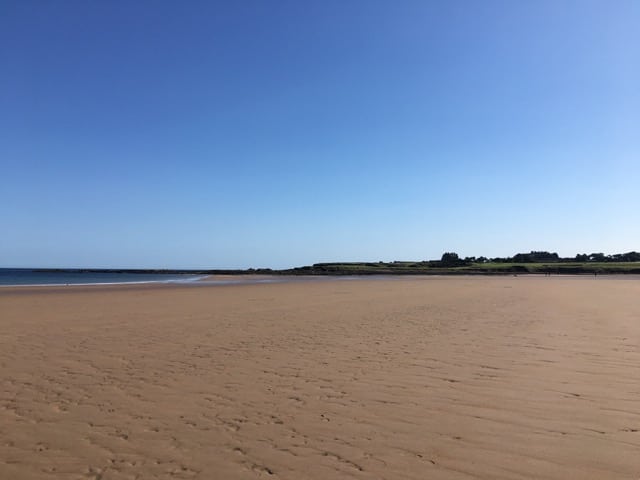 The draw of the beach at Dunbar, East Lothian.

I pottered around on the beach for a while and became a little lost in the sand dunes but eventually found my way back to the John Muir Way route.

By now I was feeling tired but not as exhausted as I have in previous long runs. Admittedly, there was very little ascent so it was an easier long run than the weekend before but I still felt a small shoot of positivity in being able to plod through all the kilometres with greater ease than even a month ago.

Being accountable to a coach (thanks John Hampshire) has been very beneficial to my training so far. I am sure that if I’d been trying to set myself the goal of longer runs I would have found many excuses not to run.

I enjoyed the sight of a beautiful buzzard flying above me and lingered a little to take photos (although they turned out to be a bit rubbish on my iPhone!).

There was more of a headwind (although gentle) on the return leg and as I finally headed into East Linton again I was starting to feel quite tired. I fuelled myself fairly successfully on jelly babies and Active Root Green Tea and Ginger sports drink.

The cottages were another 1.5 miles along a river trail and after getting a bit lost in East Linton that final stretch felt like it went on forever. I was determined not to stop though and I even jogged (very slowly) up the last hill on the road to where the Hen Weekend Squad was gathered.

The run had been manageable and much more positive than the previous 10 days and so I felt quite a bit of relief. I still think I am asking myself a lot to train for a 50k ultra run in just eight weeks but I think I am now making a wee bit of progress.