South West Coastal 300: In a nutshell 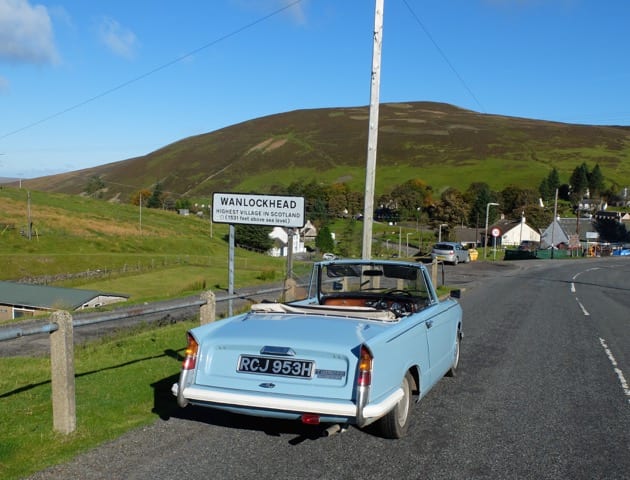 I enjoyed a three day drive in the new South west Coastal 300 route in a classic Triumph Herald. This article appeared in the Sunday Mail. 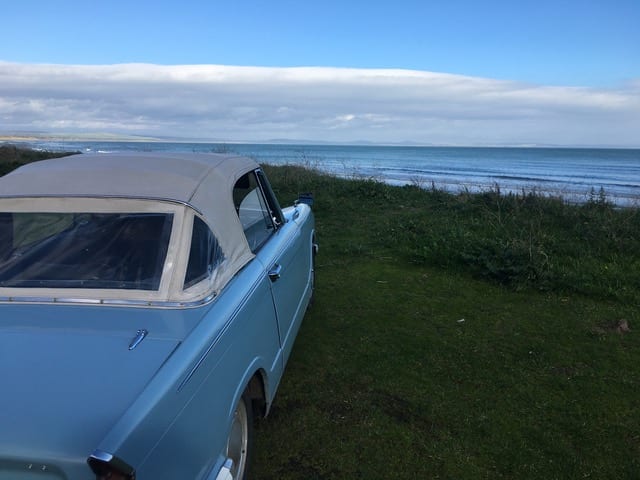 Opening the door of the 1969 Triumph Herald and lowering myself into the seat of the beautifully refurbished car, I am transported back 40 years.

I feel a wave of nostalgia as I smell the old leather seats, run my hand over the smooth wooden dashboard and clock an array of ancient-looking dials and gauges.

My nan had owned a dark green Herald and with my two siblings we enjoyed many wonderful school holiday adventures to Essex beaches and attractions.

I know immediately that Bluebelle, the hired classic car, and I will enjoy each other’s company on our three-day drive of the new South West Coastal 300 route.

Although, first, there is a list of Bluebelle’s quirks and foibles to get to grips with. Once fully instructed by Paul, the owner of Kippford Classic Car Hire, I pull out the choke (remember those?), start the engine and drive off to join a coastal road that hugs the Solway Firth coast in Dumfries & Galloway. 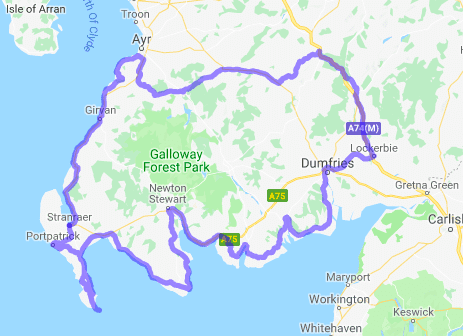 The SWC300 is the third in a series of circular road routes to be established in Scotland, following suit from the now world-acclaimed North Coast 500 and the more recently founded North-East 250.

Based on an already popular motorbike route, but with several additional sections, the 300-mile driving loop heads through Dumfries & Galloway and dips into both South and East Ayrshire.

It reaches the most southerly point in Scotland at Mull of Galloway and visits the county’s highest village, Wanlockhead, nestled in the in the Lowther Hills at 1531ft above sea level. 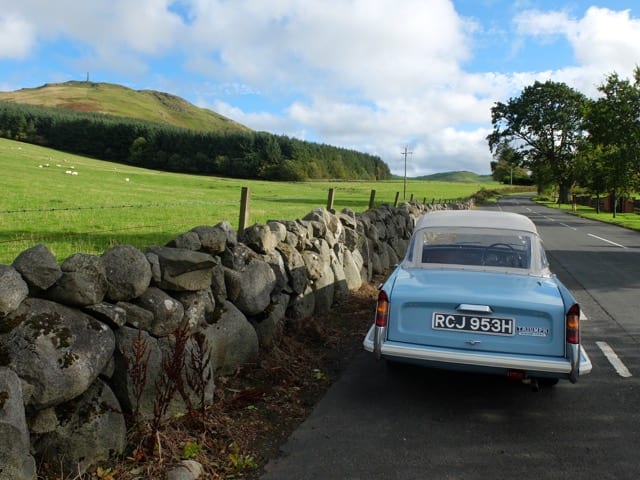 The SWC300 heads through the village of Straiton where there are many walks to enjoy.

The SWC300 is seen by local tourism businesses as a 21st century lifeline to attracting more visitors to a less-frequented area of Scotland.

Ian McAndrew, who is part of the SWC300 organising committee and owner of Blackaddie House Hotel in Sanquhar, said: “The route circles a huge area of Scotland and we have many providers who will happily cater for many, many more tourists.

“I don’t believe it will ever feel busy in Ayrshire and Dumfries & Galloway so it is a win-win for visitors and businesses alike.” 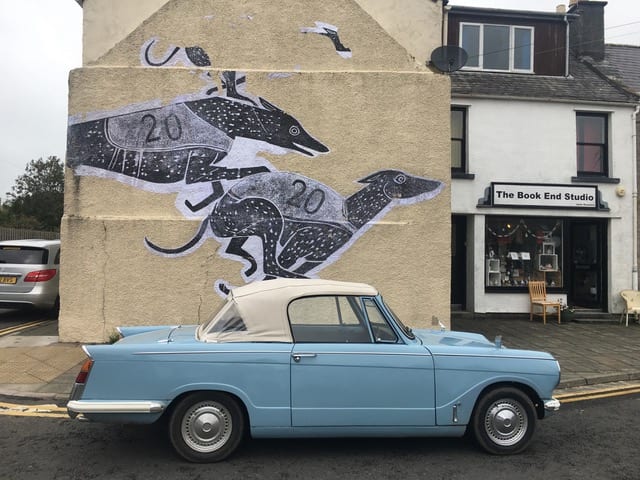 Decorated homes in Wigtown, as part of an annual book festival.

While it would be possible to whizz around the route in one long day of driving, this would be missing the point of the SWC300.

There are so many pretty villages, historic towns and fascinating attractions to visit that, in retrospect, a week would be more suitable for the full loop.

In the Triumph, I travel at a speed that at first feels long-gone old-fashioned yet turns out to be entirely appropriate for a drive-and-see holiday.

No one seems to mind me pottering along, either. They nod and smile at wee Bluebelle, as we make our leisurely journey along a route that sticks as much as possible to quiet country roads.

When I park up, people stop to chat to me, recounting how their first car was a Herald or that they recall a parent or grandparent owning own. I feel like a minor celebrity. 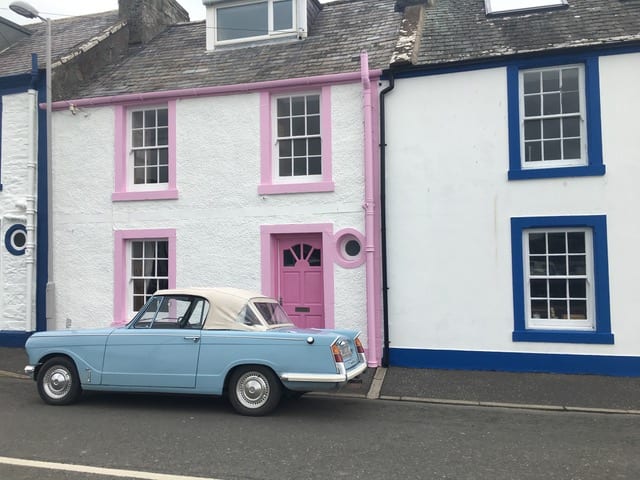 Parked in the Isle of Whithorn while I go for a stroll.

Inevitably, there are some stretches of the SWC300 that are busier with traffic but the majority of the route is peaceful and picturesque.

Each day, I aim to pick a selection of places to visit, such as the national book town of Wigtown, the “Isle” of Whithorn, Mull of Galloway lighthouse, Portpatrick, Culzean Castle, Alloway and the Robert Burns’ attractions, Wanlockhead, Lockerbie and Dumfries.

For a little more nostalgia, I add a stop at the town of Moffat to my destination list. I once took my nan there on a day trip when she moved to Scotland with my family in the 1980s and Moffat Toffee Shop is a childhood favourite of my daughter. 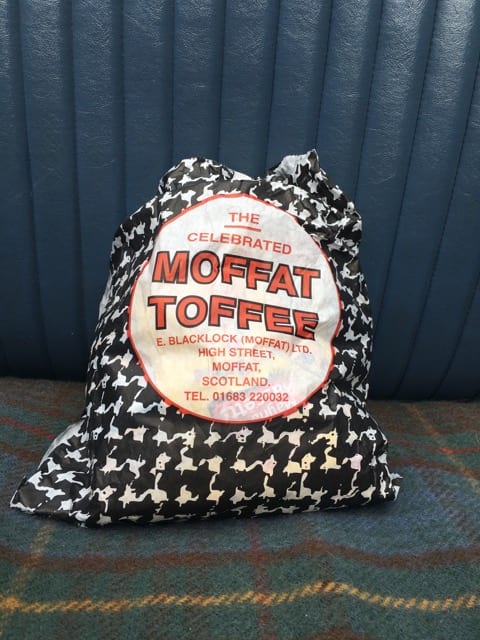 Yet, en route to each of these places, I am frequently diverted by signposts pointing the the way to other tourism gems, including secluded bays and tiny harbour villages, castles, cairns, monuments, a gemstones museum, a smokehouse and a centre for mining.

A signpost Ayrshire announces a section of road called Electric Brae, which is a “gravity hill”, where a freewheeling vehicle will appear to be drawn uphill by a mysterious attraction.

If I had my mountain bike with me – I am sure Bluebelle would not have approved of this on her back seat – a number of 7stanes trail centres, including Dalbeattie, Kirroughtree, Glentrool, Ae and Mabie would easily beckon.

There are more signposts, this time green rather than tourism brown, that point the way to a spider’s web network of waymarked walks through a gloriously shapely landscape.

The 212-mile walking trail, the Southern Upland Way, cuts through the area from the coast at Portpatrick to Wanlockhead and on to Cockburnspath on the east shore of Scotland.

Road cyclists can also enjoy signposted ways just for them, such as the Machars Cycle Routes.

I also learn many brilliant facts in this region, such as there are 115 steps to the top of Scotland’s most southerly lighthouse at the Mull of Galloway. 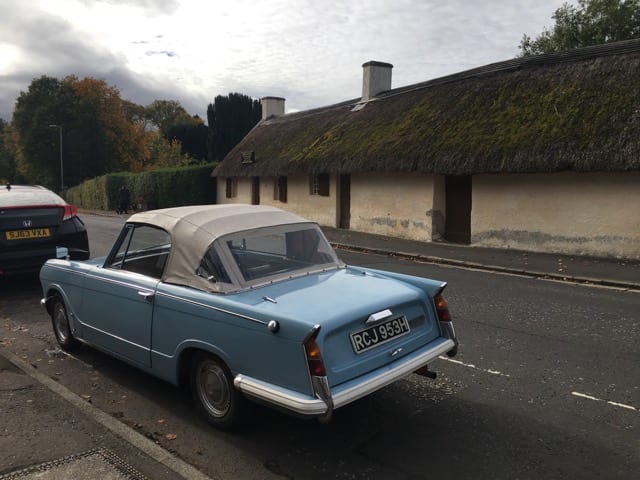 The Royal Burgh of Whithorn is also home to St Ninian’s Priory Church, which was founded by the pilgrim as the birthplace of Christianity in Scotland.

Stranraer’s North West Castle is the first hotel, not just in Scotland but in the world, to have an indoor curling rink. 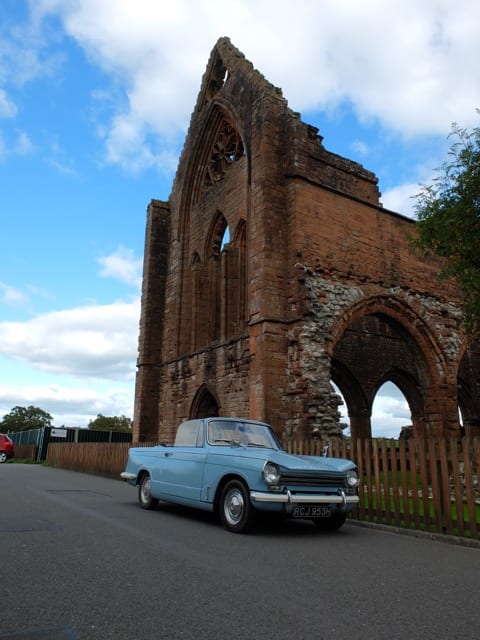 And Sweetheart Abbey, near New Abbey, was named Dulce Cor in memory of Lady Dervorgilla, who founded the building in tribute to her beloved husband, John Balliol.

At the end of my SWC300 journey, and after delivering Bluebelle back to her owner, I rejoin the world of driving at speed in my modern vehicle on the busy M74 back to Glasgow.

I wished I could have stayed longer in the region that must surely be one of Scotland’s best-kept secrets. 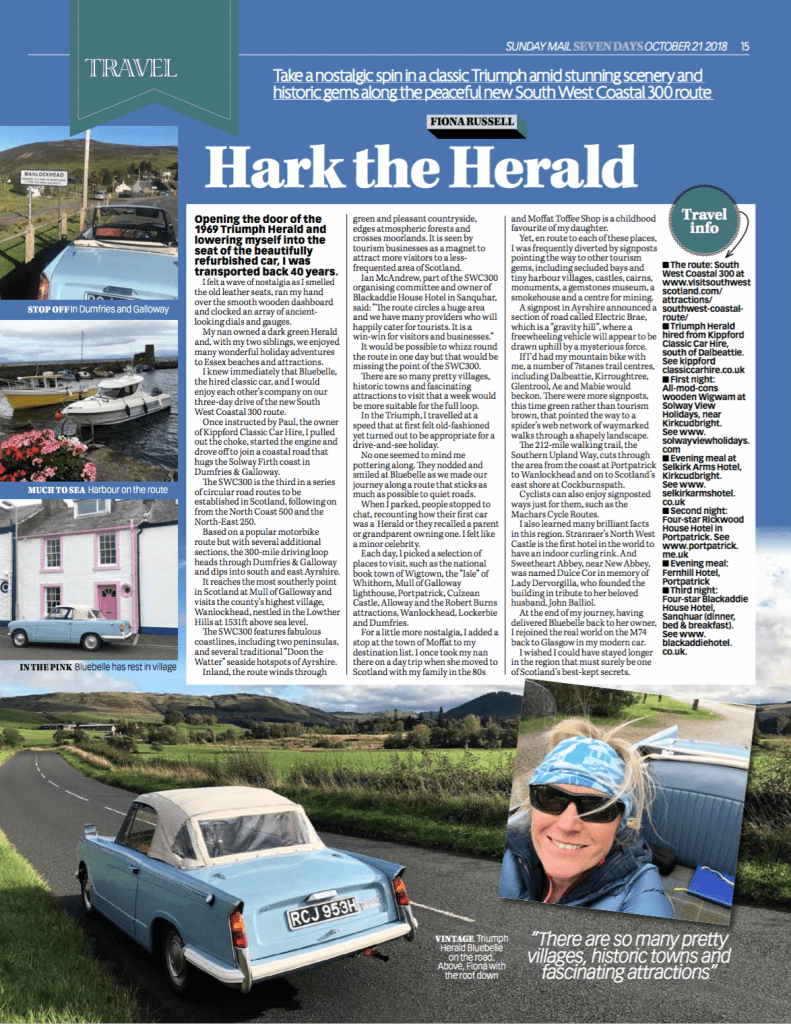