Skiing in Scotland: Where is the steepest, longest, highest, oldest, newest…?

A skier in the Ciste Gully at Cairngorm Mountain.

Scotland’s “proper” winter has been a big bonus for the five ski resorts. Thanks to excellent snow coverage and what feels like more bluebird days than normal, the ski centres have been busy with skiers and snowboarders. To date, it’s been the busiest season for three years – and the resorts are still offering good skiing.

I have enjoyed some superb Scottish skiing and it got me thinking about what skiers can expect in each of the resorts. I went in search of a list of the steepest, longest, highest, oldest, newest and even more facts and figures…

Black is the steepest grade of slope in Scotland and Europe. (In Canada and America, they call these slopes Black Diamond or Double Diamond).

But every black is different. There are some black slopes that have a short section of steep and others that are almost entirely steep and gnarly.

Scotland is considered to have some of the toughest blacks and in many cases “black is blacker” than European resorts.

There are plenty to choose from in Scotland, including:

For many years, the debate has been whether the Tiger or the Flypaper is the steepest. According to measurements, The Flypaper is 10 degrees steeper than the Tiger. But did you know that West Wall and the black run off Glas Maol in Glenshee can be as steep as The Flypaper when the snow builds up from the east?

A skier tearing down the Ciste Gully at Cairngorm Mountain.

It will depend on your level of skiing as to which of these longest runs you try.

There are 2.2 miles of easy green skiing to enjoy at CairnGorm Mountain – that’s from the top of the Ptarmigan T-bar to the Day Lodge.

Meanwhile, Glencoe’s newly marked and pisted blue run is 2.6 miles from the summit to the car park.

The longest intermediate run (graded red) in Scotland is Trident Gully from Glas Maol in Glenshee, which is a shade under a mile long.

Nevis Range is home to the highest pisted area, situated on Aonach Mor at 1,221m (4,006ft) above sea level.

The answer is surprising I think. CairnGorm’s West Wall Poma is more than a mile long.

Looking down at the funicular railway.

CairnGorm Mountain is the location of Scotland’s only funicular railway, which is also the the widest gauge funicular in the world. The rails are two metres apart, compared to a standard railway gauge in UK of 1.435m.

I am a bit of a facts geek and so I thought I’d share a bit more information. The funicular, which opened in 2001, is 2km long and ascends the northern slopes of Cairn Gorm, the UK’s sixth tallest mountain.

CairnGorm is also home to the UK’s highest post box and phone box.

The Nevis Range Mountain Gondola is the only one of its kind in Britain. It is built on the north face of Aonach Mor, the eighth highest mountain in Britain.

Easiest to reach without a car

Nevis Range is only seven miles from Fort William train station, with a bus service to the resort.

CairnGorm is a close second, being only 10 miles from Aviemore train station from where there is also a bus service.

Glencoe Mountain Resort was originally known as White Corries and was the first commercial Scottish ski area thanks to the construction of the first overhead ski lift on Meall A’Bhuiridh in 1956.

Skiing has taken place on Aonach Mor since the 1930s but it wasn’t until December 19, 1989, that the mountain was opened as the Nevis Range we know today.

With 740 hectares spread over three valleys and four mountains, Glenshee claims this title for pisted slopes. It has 25 miles of groomed pistes served by 22 lifts.

All the centres have modern piste machines but only CairnGorm can claim three Pisten Bully 600 piste machines, including two winch cats, as well as the UK’s only half-pipe cutter. 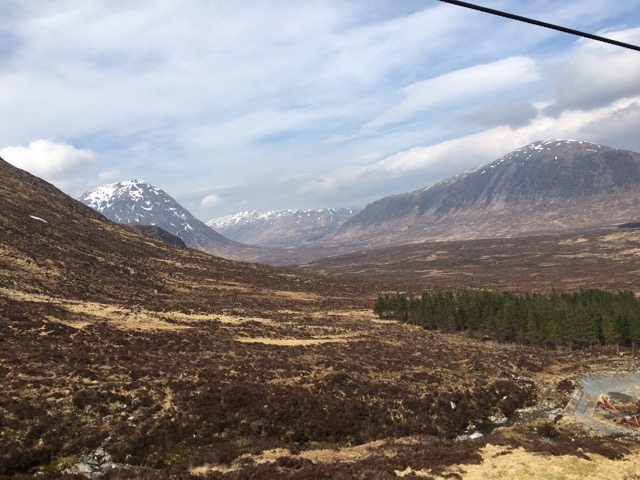 View of the Buachaille and the wider glen from the Glencoe chairlift.

This is a bit subjective and I reckon it’s the Access Chairlift at Glencoe because of the superb view to the iconic mountain, Buachaille Etive Mor. The uplift also offers wonderful views of a long waterfall as you ride upwards and a stunning of the wider glen as you descend.

Another to highly recommend is the view towards Ben Macdui from the Snowy Owl Chair at The Lecht 2090.

It is located at CairnGorm Mountain, although it doesn’t make an appearance every winter because it takes a lot of snow to build up to the full half-pipe.

Each of the five resorts is family friendly with under-fives skiing free with a paying adult.

However, The Lecht is acknowledged as the most family focused, especially for toddlers and primary school aged kids.

Glenshee has the biggest area of family friendly terrain for a snowsports family with different levels of skill, as well as easily accessible race pistes with a café to watch from.

CairnGorm has family/beginner areas opposite the Day Lodge at the bottom of the hill and also offers higher altitude beginner areas in the Ptarmigan and Ciste bowls.

Okay, so many people associate apres-skiing with hot chocolate or gluhwein (mulled wine) but this is Scotland and the best soup to be found is claimed to be at Glenshee. Why not see for yourself?

CairnGorm serves the highest Starbucks coffee in the UK at the 620m elevation Storehouse.

The Lecht and Glenshee both vie for this title.

Glenshee wins by a whisker: The A93 that leads to Glenshee rises to 646m and the café is slightly higher than the roadside.

The Lecht road – the A939 – rises to 640m with the day lodge café sitting slightly lower than the road.

However, the Day Lodge also has a café bar on its top floor…so who really knows?