It had all being going so well during our running adventure around Loch Ossian, Corrour, in the Scottish Highlands… Until we returned to the Hostelling Scotland Youth Hostel to be told the train had been cancelled…

The start of a great Corrour adventure

For several weeks, I had kept a close eye on the forecast for conditions in Corrour, a remote area of moorlands and mountains in the west Highlands. Suddenly, a wee window of dry but cold weather for Monday morning in early December arrived and I made the decision that I would go.

With my friend Vicky signed up for the trip, we both set our alarms for 6am on the Monday. Within 15 minutes of getting up we were dressed in running kit and warm jackets and heading to my van (windows de-iced already) with pre-packed rucksacks.

Even at this time in the morning, the drive from just north of Glasgow to Crianlarich was annoyingly pedestrian due to slow-moving lorries along the west-side of Loch Lomond. The A82 is not a road you can rush.

There was a mild feeling of stress in case we missed the 7.46am train from Crianlarich to Corrour, but as it turned out we were 20 minutes early.

Vicky at Crianlarich, waiting for the first train to Corrour

You’ll know of Corrour because…

Corrour featured in the iconic 1990s film Trainspotting. The railway station – the highest in the UK – was the scene of the movie characters, Renton, Tommy, Sick Boy and Spud, who “arrive in the great outdoors” at Corrour.

In fact, Corrour is located between Rannoch and Tulloch stations on the Glasgow to Fort William West Highland Line. The area is accessible only by train, or on foot or bike on a rough track. The nearest public road is 17 miles away.

The stop before Corrour from the south.

The train leaves Corrour… and we are left in the wilderness area of Corrour.

In winter, there is a limited train timetable in operation. There are four trains heading north and three heading south. (Note: There are more train options in summer.)

There is a lot of confusion about the first train north. It’s the sleeper train that starts in London. You can’t book this on-line. However, a phone call to the sleeper train customer service confirmed it’s ok to simply get on the train and pay. I was assured the train would stop at all stations including Crianlarich, Tyndrum, Bridge of Orchy and Rannoch before Corrour.

The train was set to get to Corrour at around 9am, which gave us a window of 3.5 hours to run a circuit of the seven-mile loch. This would be more than enough time.

I had also called the very helpful on-site hostel manager Jan. She said that although the hostel is closed on a Monday and Tuesday in winter she would allow Vicky and I to leave our rucksacks of warm kit and snacks inside the hostel while we ran.

Corrour is a popular destination for walkers intent on bagging three of the 282 Munros (Scottish mountains with a summit for more than 3000ft) and surprisingly, given its remote location, it is home to a station restaurant (open March to October), a range of self-catering lodges and cottages and the Hostelling Scotland Loch Ossian Youth Hostel.

For the train journey alone

The train ride from Crianlarich to Corrour is just over an hour and gave a fantastic views of moorland, mountains and lochs. We saw numerous red deer close to the railway line and watched as the sun came up, painting the sky in striking colours of pinks, reds and yellows.

Eating our pre-packed breakfast on the train.

Stunning sunrise views from the train.

I highly recommend this train journey, as well as the full Glasgow to Fort William outing, for superb vistas as you sit in the cosy warmth of a train carriage.

Why run around Loch Ossian?

Having visited Corrour before to walk two Munros, Sgor Gaibhre and Carn Dearg, I had greatly enjoyed the wild beauty of the area and I was keen to return. (The other Munro, Beinn na Lap, is ear-marked as my last Munro of my first round. I have 42 Munros to go.)

I also know of people who have mountain biked in this remote area. For example, Fersit to Corrour Station.

And, more recently, I discovered information about a Run Around Loch Ossian Challenge. The story goes that former hostel warden Tom Rigg started the challenge with his sub-hour run of the seven-mile Loch Ossian circuit. He did this in 1977 and started a log book of people who ran it under the hour. 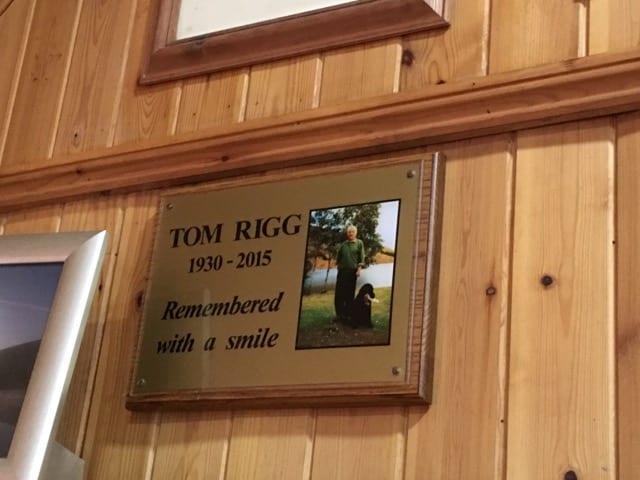 Tom Rigg came up with the idea of running around Loch Ossian in less than an hour.

Tom’s first entry in the Run Around Loch Ossian logbook in 1977.

While I had no desire to run the loch as fast as possible, I was interested in seeing the log book and finding out more about the challenge.

I also liked the idea of running a fairly easy and flat route around a loch in such a remote yet beautiful location at 400m above sea level.

Which is how Vicky and I found ourselves at Loch Ossian Youth Hostel one Monday morning, feeling extremely fortunate to be experiencing calm, warm-for-winter and bright conditions.

Walk from Corrour station to the hostel

The walk is a mile and the views were superb on a chilly but bright winter’s morning.

The run around Loch Ossian

I am going to let this story of a run on a wide tracks and well-defined paths for a seven-mile circuit of Loch Ossian be revealed by photos. (It is a mile from Corrour Station to Loch Ossian Youth Hostel, so you could make it a nine-mile outing. We walked between the station and hostel – and ran around the loch.)

The terrain is well-maintained – muddy in places – Landrover tracks. The route is flat to undulating. The north-westerly side seemed hillier but we had already run from the hostel at the south-easterly point, around half the loch by the time we reached this stretch so maybe we were tired. Most profiles of this route make it seem completely flat but it definitely isn’t.

There is an almost-hidden Corrour estate lodge at the far end of the loch that we tried to get a good view of. The original Victorian lodge was destroyed by fire in 1942. It was replaced by a small, shingle-clad bungalow.

The current owners bought the estate in 1995 and proceeded to build a new lodge, designed by the architect Moshe Safdie, which was finished in 2003.

It is built of granite, steel and glass and is set between the surviving arms of its Victorian predecessor on the bank of Loch Ossian. The Corrour website states: “The lodge’s geometric composition echoes the grandeur of its surrounds; pyramidal glass towers connect it with the wilderness beyond.”

This is all we managed to glimpse through the trees.

The route continued around the loch and felt a little hillier.

Vicky and I thoroughly enjoyed the run, views, weather and challenge. As we returned to the hostel we were both on a high. It felt even more fantastic to be enjoying the adventure while many other people were at their desks in an office. 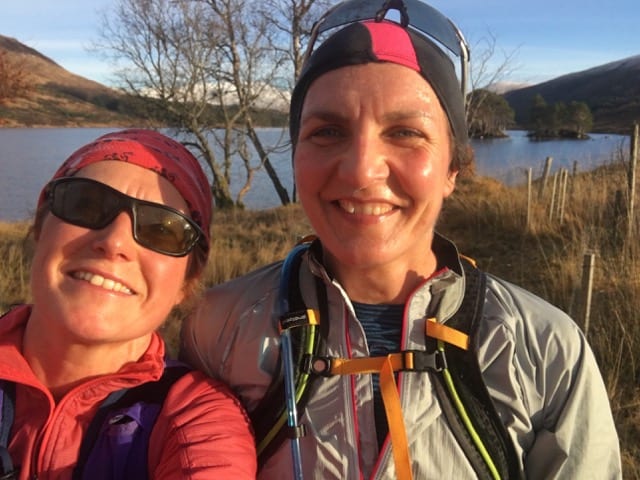 Vicky and I after our around Loch Ossian run.

Long shadows of a winter’s afternoon.

We were having a picnic outside on a bench in the winter sunshine when we discovered that my well-laid plans would need to be adjusted.

Jan delivered the news that he 12.30pm train out of Corrour had been cancelled by ScotRail and then next train was not until 6.25pm. Jan has a good communication link with Scot rail because she relies on the trains for access to and from Corrour.

Vicky and I looked at each other a little doubtfully. We both had plans for that evening… but since there was nothing we could do (the walk out would have been rather long!), we decided to fully embrace the opportunity to do, well, absolutely nothing!

We both managed to relay messages to the people affected by our unplanned situation stranded in Corrour – and then we simply chilled out.

We were warm and dry – Jan kindly lit the stove in the hostel – and we had a flask of coffee and the leftovers from our lunch. We chatted, laughed, got to know Jan, chatted some more and played a game of Scrabble.

Vicky trie to make the most of her Scrabble letters.

The extra hours also afforded me a lengthy look through the Run Around Loch Ossian logbook. There were quite a few names of running club and people that I recognised.

We also enjoyed the views close to the hostel and we thought about climbing my last Munro, but then I decided I would rather save it for another adventure.

In the end, the enforced wait for the next train turned out to be a thoroughly enjoyable afternoon with a great friend.

And, if we had not become stranded in Corrour, we would not have witnessed this amazing vista over Loch Ossian.

The 6.25pm train from Corrour

We were joined for the mile walk back to Corrour Station by Jan. As we walked in the dark, we found out more about the life of a manager of a remote hostel. It seems like a strange and potentially lonely job but she revealed that it’s often interesting and always busy with people, even in winter.

Corrour might be remote but the train offers quite amazing access and an incredible sense of adventure. They fact that you can’t always be sure the train will return, makes it feel all the most exciting, in my opinion.

Why not stay a night or two?

There is the Loch Ossian Youth Hostel open year round (closed Mondays and Tuesdays in winter) and various lodges and cottages available as part of Corrour Estate.