John McSporran on one of his 100 ascents of Ben A'an.

A Scottish photographer has completed a three-year challenge to climb Ben A’an 100 times. John McSporran chose the 1489ft (454m) hill in Loch Lomond & the Trossachs Park because it’s close to his home and “because it’s not particularly high,” he said.

John McSporran on his first summit of Ben A’an.

Ben A’an, also known as the “mountain in miniature”, is a popular hill walk and takes the average fit person about 60 minutes to get to the top.

It’s steep in places and depending on the weather can pose a challenge. 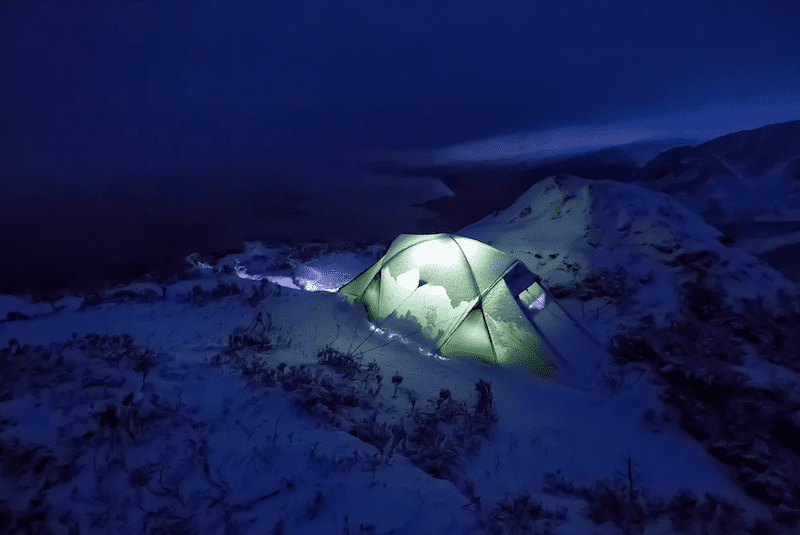 Wild camp in the snow on Ben A’an.

The original name for Ben A’an was Am Binnean. It was anglicised into the English by Sir Walter Scott in his famous book, The Lady of the Lake.  Am Binnean means the pinnacle or small pointed peak.

John, of Aberfoyle, Stirlingshire, said: “The hill is a steep lung-bursting climb at times. There is no ‘ease yourself into it gradually’ like many of the Glencoe Munros or even Ben Nevis.”

John’s fastest ascent was 38 minutes, and he has also reached the top after a leisurely two hours of strolling with friends.

He has made his ascents in the daytime and also at night.

He has watched spectacular sunrises and sunsets from the summit.

John has encountered every weather that Scotland can create, from snow to driving rain to hot sunshine.

He has wild camped on top in a winter storm and he was also fortunate to see a “fog bow’” wreath as sunrise struck the mountain top in mid-winter.

Wildlife spots have included eagles and ospreys swooping around the hill top.

During his challenge, one of his Ben Aa’n photos reached the finals of Mountain Photo of the Year.

John said: “Ben Aa’n is a great walk at all times of the year and you always see something different.

“It offers a superb viewpoint, especially at the top, where there is an almost 360 degree panorama, taking in mountains such as the Arrochar Alps, Ben Lomond, Ben More, Ben Ledi and Ben Venue.

“On a clear day, it’s also possible to see as far as the cities of Stirling and Edinburgh.

“Several lochs are also in view below, including Loch Katrine, where the steamship Sir Walter Scott cruises.”

John has met thousands of people on the mountain during his 100 ascents.

He said: “Everyone is very friendly when walking on Ben Aa’n and they are always willing to say hello.

“Among memorable encounters I’ve met a 50-member choir all the way from Holland, who sang hymns on the top.

“I met 200 members of a Glasgow mosque on a charity climb, including women in full burqa.

“I once saw a family trying to push a pram up the near vertical rock steps and a guy climbing it in stiletto heels for a bet.”

Sadly, John also ended up injured on the hill after falling 100ft. He ruptured his medial and cruciate ligaments.

He said: “I was my own stupid fault. I was paying attention to getting a photograph and not where I was standing.

“I patched myself up and managed to limp off. The upside was I protected my camera equipment, which survived undamaged.”

The injury stopped his Ben Aa’n challenge for a while but after surgery in July this year he climbed the hill for the 97th time.

John said: “When choosing a hill I took a few things into consideration, but, really, as a landscape photographer there is a lot to like about Ben A’an.

“For me Ben A’an is not a ‘glass half full’, it’s a glass overflowing type of hill.

“I have greatly enjoyed walking it so many times and the chances are I will continue.”

This article appeared in my Sunday Mail outdoors column. See the pdf.