Ischgl: History, skiing and wonderful views on the Smugglers’ Circuits 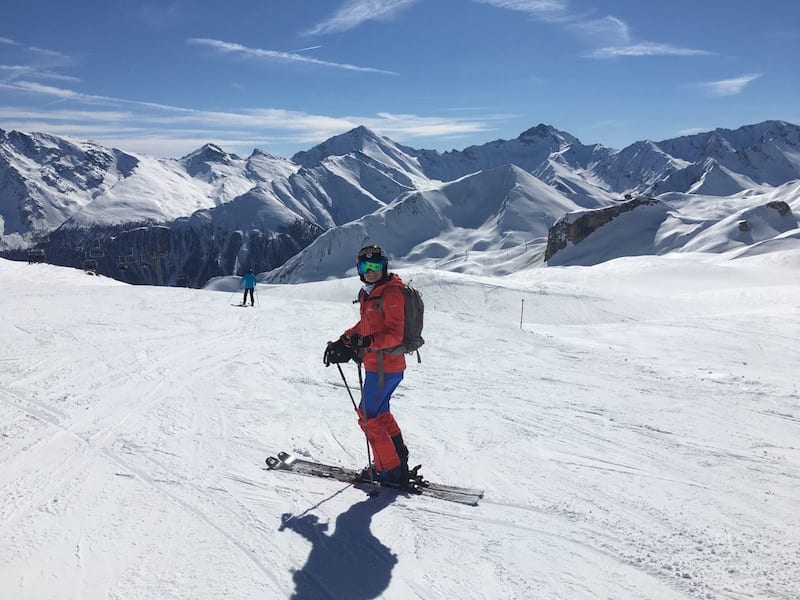 The Austrian ski resort of Ischgl has created three skiing circuits, the Gold, Silver and Bronze Smugglers’ circuit, to help skiers and snowboarders to explore the wider ski area of Silvretta. As newcomers to Ischgl, G and I made use of the signposted routes to discover the full extent of the pistes and lifts.

Arriving at a new ski resort with a wide choice of slopes and lifts can be mesmerising. I had read that there are 239kms of pistes to ski in the Austrian resort, including 34km of difficult (black) runs, 143km of medium (red) runs and 47km of easy (blue and green) runs.

G and I had a look at the piste map and there it all was, laid out in front of us. We knew we could head out and choose a few ups and downs, via a variety of lifts and slopes at random, and we would, no doubt, have a good time.

But what if we missed out a section of the resort, or somehow didn’t visit one of the best runs, or didn’t see the best views?

Instead, we spotted another piste map: One that showed the three Smugglers’ routes. The Gold, Silver and Bronze circuits take skiers and snowboarders on a waymarked circuit of the wider resort.

Similar to mountain biking or hiking trails, the Smugglers’ circuits provide a destination-to-destination route for newcomers to Ischgl and give a great overview of what’s on offer.

Who were the Ischgl Smugglers?

Ischgl sits on the Austrian-Swiss border and close to the Swiss resort of Samnaun. As well as sharing their ski slopes, the resort has a long history with smugglers.

In times past, Austrians would pack their bags and rucksacks with butter, cheese, furs and other goods to take to Switzerland – and return with products such as coffee, flour, rice, sugar, spices and tobacco to sell in Austria.

What are the Smugglers’ Circuits?

Bringing the Smuggler theme into the 21st century, the waymarked routes allow skiers to collect kilometres, rather than smuggling goods. The routes are marked on a piste maps and also signposted on the mountain.

An app, downloaded on to your smartphone, tracks progress by GPS and allows you to record your route.

If you successfully complete the gold, silver or bronze circuits, you can enter various prize draws to win items, from headbands to lift passes.

Your circuit is also entered into an on-line league table. Making it to the first place in the smuggler’s circuit ranking brings the chance for more prizes (plus a great feeling!).

One of the longest ski circuits in the world, the route extends to 59kms with 35.7km an altitude difference of 12,926m. (including cable cars and lifts).

The route extends to 49kms with an altitude difference of 9490m (including cable cars and lifts).

The route extends to 40kms with an altitude difference of 8282m (including cable cars and lifts).

Highlight of the circuits:

There are 13 “checkpoints” on the Gold Smugglers’ Route.

We liked the look of the Gold Smugglers’ Circuit for several reasons. Firstly, we had fresh legs; secondly, were keen to get a full overview of the resort; thirdly, the weather was sunny and fine; and fourthly we had the advantage of being guided by Matthius, from the Ischgl ski school.

Of course, we did not really need a guide to follow the waymarked route but when you are familiarising yourself with a resort it is great to have local knowledge.

Matthius grew up in Ischgl and it was obvious he knew every nook and cranny of the resort.

We enjoyed his extra info and stories (while riding the gondola and chairlift) and following his speedy lines down every slope.

Over the following few days we also explored the silver and bronze circuits, while taking the opportunity to detour to various slopes that we suddenly liked the look of.

The Austrian resort of Ischgl sits on the border across from the Swiss resort of Samnaun. It is located in western Austria’s Paznaun Valley.

Many of the lifts and cable cars converge on the Idalp plateau, and provide access to the larger Silvretta Arena ski area.

From our hotel, the friendly four-star Hotel Seiblishof, it was a short walk to the closest gondola, the Silvrettabahn, which is one of three access points to the Silvetta ski area, alongside the Fimbabahn and Pardatschgratbahn cable cars.

The morning uplift each day was swift. A total of 3440 people can be transported each hour and the Silvrettabahn moves at a speed of 6 metres per second to reach a height of 2320m above sea level.

Indeed, Ischgl is proud of its speedy uplifts! The resort has more than 40 lifts and most of them are fast, including some high-speed eight-man chairs and heated gondolas. Many chairlifts have windshields as well.

We travelled with Crystal Ski Holidays (crystalski.co.uk; 020 8610 3123), which offers a week’s half-board accommodation at the four-star Hotel Resort Seiblishof.

Prices from £1344 per person when booked online (based on two sharing) including flights from Edinburgh to Innsbruck and airport transfers (the example price given is for departure on January 4 2020). Direct flights available from all major UK airports.