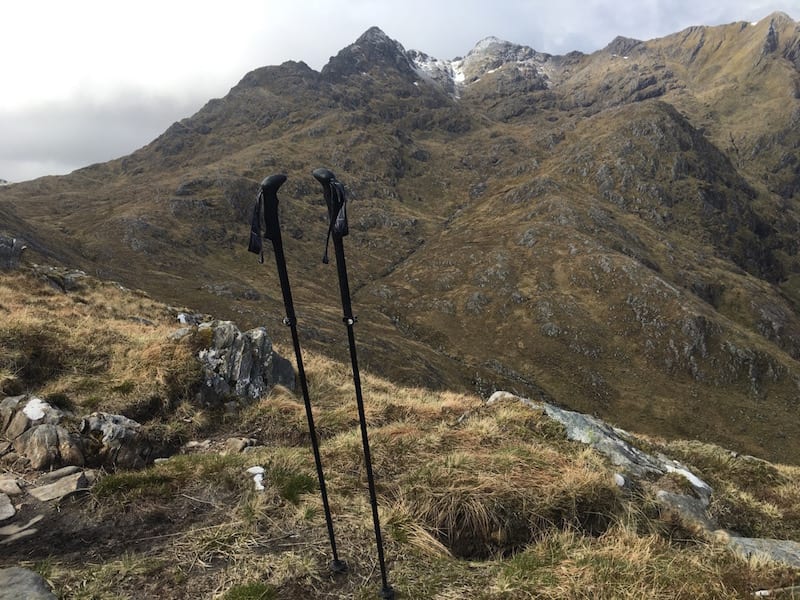 Looking across to the Forcan Ridge.

This is my experience walking with friends and Hubby G on The Saddle, Forcan Ridge and Sgurr na Sgine in Kintail, Highlands.

There is a junction in the path en route to the Munro called The Saddle. The split in the mountain trail sits at an elevation of about 700m southwest of a smaller summit called Meallan Odhar and just below the infamous Forcan Ridge.

It was here that I needed to decide if I would brave the ridge route or take the “chicken run” around the side of the mountain.

It states: “The scrambling is simple at first, but the ridge becomes progressively more exposed. Some sections are a real knife-edge, but there is a worn scrambling path, which avoids the rocks by keeping just to the right at several points. The exposure is however considerable. After passing the top of Sgurr na Forcan there is an awkward steep descent of a pitch of about 10 metres etc.”

I am not a fan of exposure. Nor do not like heights. In addition, down climbing on a ridge is always out of my comfort zone.

Yet, I like to challenge myself. I have gained a lot of experience of knowing what I can cope with in the mountains, including steep gradients, exposure and poor weather. I wanted to see what the Forcan Ridge was all about.

One of our friends, Martin, also said that if the ridge became too much for anyone he would retrace steps with us and make the alternative climb via the contouring chicken run.

The start of the Forcan Ridge

The ridge does look daunting. If you love climbing and scrambling you might see it in a different way, but for someone who feels uncomfortable with heights this ridge looks gnarly.

The contrast in feelings in our group was stark.

Tommy said: “I look ahead and I just see it as fun. I can’t wait to get up there.”

More nervously, Victoria asked her partner Martin: “Do you think I’ll be okay? You know what I am like. What are your thoughts? I would like to do it, but…”

Martin was sure Victoria would be fine on this type of ridge – and she was.

Tommy’s wife Jackie was more concerned about her fitness and her niggling knee injury than the height and exposure. She said: “I don’t mind heights. That’s a good thing for me, but I don’t want to hold you all up.”

She didn’t hold us up because I did!

To start with I felt fine. My method is to always look up and along, rather than down. I don’t mind the climbing and scrambling up as long as I don’t look down.

I also tend to hold on with at least one hand. I find I can’t quite trust myself standing only on two feet and so I usually bend down and use my hands as well.

I don’t think my method is the best, nor does it look too stylish, but it’s how I cope when I feel exposed.

There were also plenty of sections of the ridge that were wider, which meant I felt relatively comfortable.

The chat within the group was helpful, too, because it stopped me from thinking too hard about what I was doing.

But I did find it very nerve-racking at points. There are several sections of very narrow ridge, with long drops either side.

There are rocky buttresses (smallish but still notable) to climb over or traverse around. These had some big drops below.

There is also a truly horrible back climb of about 10 metres about halfway along the ridge. I had been dreading this and it  was every bit as awful as I thought it would be.

Climbing down an overhanging rock face when I can’t see the bottom totally freaks me out. At one point there is a tricky side traverse to make and I felt really exposed.

I think I said something like: “I can’t do it. No, that’s impossible.” I felt my legs shaking and the sweat was dripping down my back. My head said: “No way.”

But, really, I had to keep going. There was no sensible way back at this point and with friends above and friends below I had to swallow the largest brave pill and get on with it.

I was lucky because Martin and G were there to tell me exactly where to place my feet and hands. They really looked after me and with huge amounts of kindness and patience they got me down that section.

I have heard people talk about the need for an abseil at this point. It would make the ridge easier for some people but it’s really just one short section on a ridge that otherwise requires you to go up or along and so I think that ropes are probably unnecessary for most walkers.

After the down climb I needed to rest for a few minutes to let my shaking legs and racing heart calm down. Then we climbed on.

I had no idea what was to come next and as I looked up, all I could see was more exposure and edges. But, in fact, the rest of the ridge was easier.

Comparing the Forcan ridge to, say, the Aonach Eagach or Liathach is probably quite helpful. In my opinion, and experience, the Forcan Ridge is less daunting than the Aonach Eagach. It is much shorter and the buttresses are smaller. There is only one down climb.

Liathach is different. It has two rocky towers to climb over or around but neither feels as exposed as the Forcan Ridge. Then again, I am looking back on Liathach with rose-tinted glasses because I did that a while ago and in my head I managed it without incident. Actually, at the time, I was freaking out.

The Forcan Ridge is absolutely fine for people with a head for heights. It is a challenge for those with vertigo. But it’s achievable if you have patient and supportive friends around you and a good deal of experience of knowing that you can cope in the mountains, even if you feel like crying loudly.

And, you know what? I felt so bloody pleased with myself for facing my fears and getting across that Fookin Ridge.

The Saddle to Sgurr na Sgine

Reaching the top of The Saddle by the Forcan Ridge is one my most satisfying days in the Scottish mountains. We saw a large group of people who had taken the chicken run route that contours the mountain before climbing steeply to The Saddle summit. I felt proud of myself for choosing to do the ridge. However, the great thing about this Munro is that there is a choice.

After a picnic lunch sheltered from the wind and in sunshine, we descended the Saddle towards the south-east until a lochan at a bealach.

Again the route head upwards. It was rocky and unrelenting with a path that zigzagged up the northern side of Sgurr na Sgine. But I was still on a high after the ridge and I hardly noticed the effort of climbing.

We stopped again for more food on the second Munro summit of the day before beginning the long descent back to the start.

After a bit of map planning, we decided not follow the Walk Highlands return route because Jackie was suffering with a very sore knee. The descent looked very steep so, instead, we retraced our steps to the lochan and on to the same path that we had ascended to the east of Meallan Odhar. This was a longer return route but on a kinder gradient.

The most amazing views

Because I have been so focused on that ridge, I have not written about the views. Kintail is, in my opinion, one of the most spectacular areas of Scotland. I love the vistas of mountains and sea lochs and this double Munro hike does not disappoint.

Apart from the ridge, where I tried not to look out or down at all, I thoroughly enjoyed the fabulous views. I’ll let the photos show you more.